Romney’s eyebrows, Perry’s pauses and Bachmann’s pleas to Anderson Cooper. The Republicans took Las Vegas, and they were adorable. 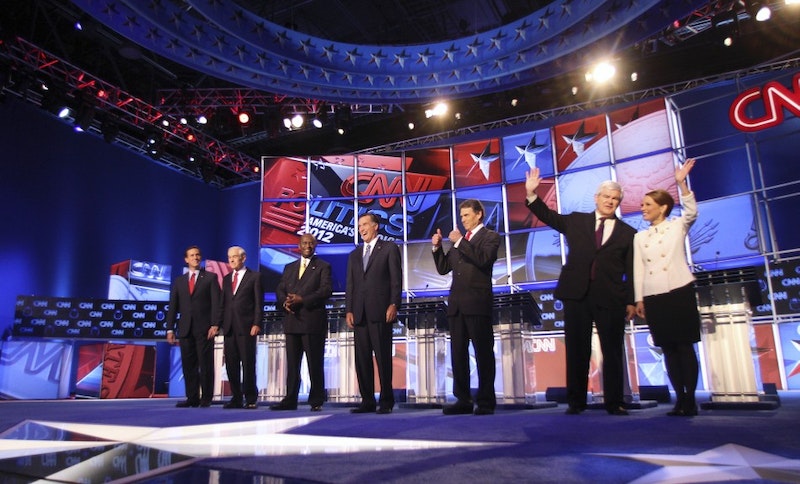 Mitt Romney and Rick Perry went at it (“I’m speaking, I’m speaking, I’m speaking”) and you had to smile. The Republican presidential debaters on view Tuesday night in Las Vegas would appear to be an advanced new generation of Muppets, one promoted to human proportions at the cost of a real but not disabling reduction in puppet adorability. This is especially the case with Perry and Romney, the fellows who supposedly might become president. Never have two men looked more like felt could be a part of their physical makeup. There are four big, not to say towering, reasons for this: Perry’s hair, Romney’s hair, and (especially) Romney’s eyebrows. But these reasons gain their persuasiveness from an underlying factor, namely the absence of easily identifiable reasons for thinking the two men aren’t made of felt. Yes, humans in general aren’t made of felt. But this is Perry and Romney, for Christ’s sake.

Who’s toughest? Neither of them. Before seeing Romney in action, I thought his problem would be the ongoing leak of his odiousness from behind a smiling mask. Instead what tripped him up was the way he squeaked and winced. Not that he seemed rattled, but neither did he come across as a man of unusual force or resolution. And if you’re going to fight before a national audience, you want to come across as especially forceful and at ease with yourself, not as a fellow who will probably but not certainly keep his voice intact while arguing with the cable company. Even at rest, Romney undercut himself. He has a habitual tilt of the head and left shoulder. This tilt isn’t quite a protective hunch, since the head doesn’t actually pull down while the shoulder rises. Instead the two remain in line with each other, but it’s a slanted line. The head appears ready to slide down along it to the ground.

As for Perry, the hard gaze he directed at Romney was definitely not an unblinking gaze. He looked like he had nailed his face into position and would not let it swerve no matter what his natural inclinations. For a bad dog, Perry arouses protective instincts. The pauses that afflict him before treacherous vocabulary words or data points (“We need to have a, a, a discussion in, in this country about our… 10th Amendment”) recall a child wondering if he can reach his foot across a frozen slush puddle. He had one spell where he seemed relaxed and in command, and that was brushing off Rick Santorum about TARP. At least you didn’t want to chuck him under the chin. Otherwise his high point was the terse, scrappy way he said “Have at it” when Romney prevailed on him to stop interrupting. It was cute.

Bonus entertainment. Michele Bachmann’s laugh when Newt Gingrich let off a good one about stupid government. What a shovel slap of a good-old-girl heehaw she has. Maybe she just wanted to remind everyone she was there, since she had been stationed near the end of Podium Row. It’s tough to make your case to the American people when the word you have to use most often is Anderson, as in “Anderson, can I respond?” and “Oh no, no, no. Anderson—” and the simple, understated “Anderson?”

To that last one, moderator Anderson Cooper replied, “He still has time. Let him finish.” At last the fellow in question—Romney, of course—wound up. “Anderson?” the Congresswoman said, and added, “Anderson.” To which Cooper replied, I’m pretty sure, “Congresswoman, welcome,” after which she launched into the remarks that had been burning her up (“Anderson, I think that it has to be stated that Obamacare is so flat-out unpopular that,” etc.). I found this exchange charming, but the transcript
provides no evidence that it happened. Instead Bachmann has a simple, unrepeated “Anderson?” and this prompts the mundane response “Congresswoman Bachmann.” Who is right? I say never vote against Anderson Cooper’s gallantry or Michele Bachmann’s ability to repeat herself.