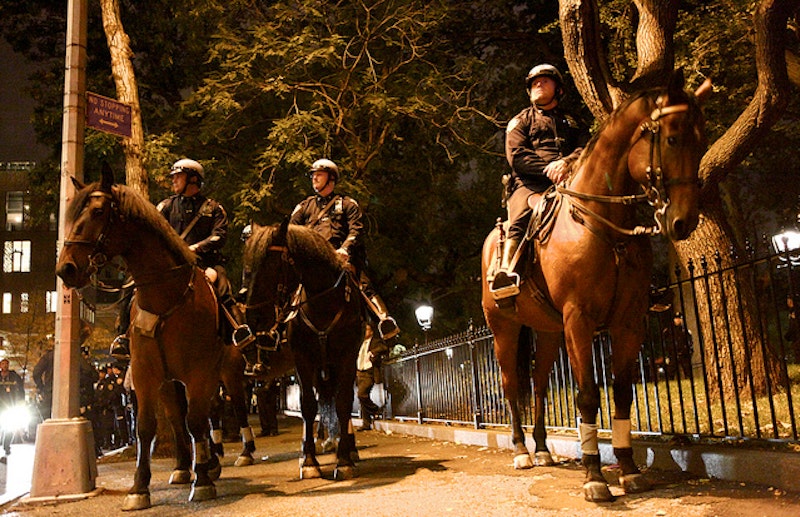 Plans for the Occupy Wall Street movement to expand into Washington Square Park over the weekend didn't quite go as planned, as hundreds of protesters left the park before midnight on Saturday to avoid arrest on curfew violation. Protesters have been rallying in the park for the last week and a half, but as far as I can tell the 14 arrested on Saturday were the first, and some in the OWS movement aren't too happy about it either. "Although I can’t speak for the whole group," said Anthony Alan, one of the "moderators" of the Washington Square Park assembly, "if people want to stay the night, that’s their decision, but what happened on Saturday is something we don’t want to continue."

As I learned last night, one of the 14 arrested was local Baltimore folk singer Caleb Stine, who can be seen in the above video (filmed by a reporter from Mother Jones) playing the Woody Guthrie classic "This Land Is Your Land." And while the protest and subsequent arrests look about as non-confrontational as they come, many of the Internet comments have been typically inane:

"Nice to see the cops (for the most part) being polite instead of walking up and pepper spraying everyone."

"I agree they had to stand their ground and did it bravely, but they did not treat that individual human being respectfully because he was a 'cop,' and that is not going to win us any support from the police and military..."

"Stop playing your god damned violin when someone is talking to you asshole. What are you trying to piss the cop off?"

And on and on. But when did it come to this? Do we have such a low opinion of law enforcement that we expect nothing anymore but harsh tactics—bludgeonings and pepper spray and attack dogs? So not violating our civil rights turns into an act of "TREMENDOUS restraint"? Any cop who does his job without resorting to excessive force deserves a pat on the back, and unless protesters are unnecessarily beaten down they're in the wrong?

To me, the 14 arrested on Saturday were upholding a long tradition of civil disobedience, a tradition that most Americans—if the comments around the Internet are any indication—don't understand anymore. As TV pundits shout propaganda and presidential candidates campaign in 140 characters, I wonder, does anyone remember the UFW boycotts, the draft card burnings and the '71 May Day traffic blockades? Did we forget that women only gained the right to vote after decades of organized protest; that Susan B. Anthony was arrested for trying to vote for Ulysses S. Grant? Did we forget about sit-ins and Freedom Riders? On Sunday, President Obama dedicated a memorial to MLK in a country that remembers the "I Have a Dream..." speech but not the "Letter From Birmingham Jail."

"Peaceful resistance and protest I get," said one commenter, "but c'mon you gotta pick your fights smarter than that." "A few people in a park after midnight is not a resistance movement," said another, "it's just disrespect for park policy." And so the bulwark of our democracy—the right of free speech and peaceful assembly—crumbles a little more.

So how about this: Don't rally for the cause and then walk out at 11:59 saying, "Fuck the cops" and "Fascist America," because if you're not willing to spend a few hours in lock-up then you're not protesting, you're just spending a nice day in the park.