The Tea Party's party has rallied behind Herman Cain and fought to keep a MD Democrat's district intact. 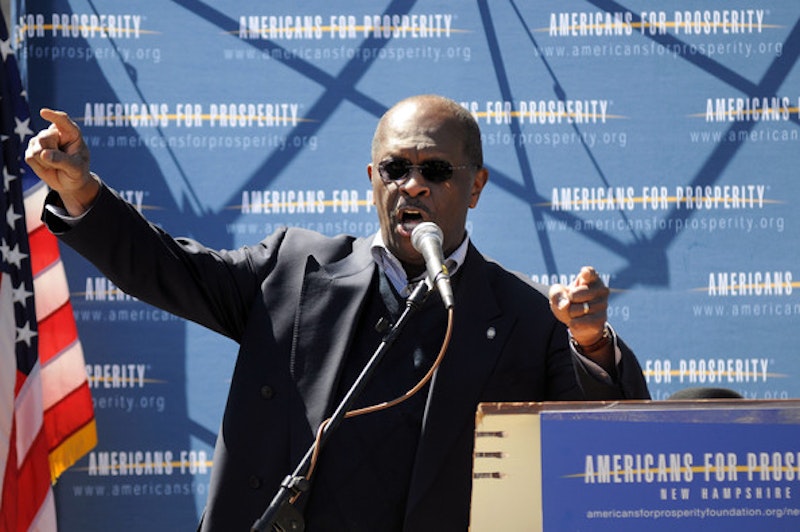 Politics and race toddle hand in hand, more often for cynical motives than noble reasons. Who would’ve guessed that Republicans are so sensitive about civil rights and so caring about blacks that they’d rally around a black candidate for president and help a black member of Congress try to preserve her natural constituency in a redistricting fight in the Maryland suburbs around Washington? Consider where the GOP is these days, 150 years after the Civil War. Back then, Democrats were the conservatives of the era and Republicans fought to end slavery—one of the great role reversals in American history. The very same Republican Party, in the state houses they control across the country, is moving to disenfranchise millions of minorities by requiring voter ID from the poor and the elderly who lack fees or the proper paperwork.

The series of Republican debates has revealed more about the audiences, and the party’s mental state these days, than they have about the eight candidates who’ve participated in the forensic sideshows. Seven of the eight participants will say anything to grab attention and applause because they know they can’t win the nomination. And it’s a measure of the GOP’s desperation that the party’s nominee is likely to be selected by default through the debates instead of the customary primary election and convention system.

The audiences—ostensibly the Tea Party wing of the GOP—have applauded the macabre and sat silently through the profound (such as it has been). They’ve even booed a couple of times and cheered enthusiastically when Rick Perry boasted of having executed 234 criminals. It’s Herman Cain, a black man, who’s playing nip-and-tuck with Mitt Romney in the polls and whose visage is on the cover of Newsweek. Consider what the GOP’s eight philosopher-kings (queen) have to say: Cain has accused blacks of being “brainwashed” to vote Democratic and added that he left the “Democratic plantation” years ago. In a nation where nearly 25 million people are unemployed and the rate is stuck at 9.1 percent, Cain said to anyone who doesn’t have a job that, “It’s your own fault.” He has said that, as president, he’d build an “electrified fence” along the Mexican boarder with a sign that reads, “This can kill you.”

As if that weren’t lethal enough, Cain added that he would build a moat filled with alligators and that anyone who could make it across the deadly waters would automatically get a green card and work privileges in America. All of Cain’s lines draw cheers and applause. Rep. Ron Paul got a volley of applause when he declaimed that anyone who doesn’t have medical insurance should be left to die because that’s their choice. Rep. Michele Bachmann, the adorable dunce, wants to employ drones, manned or unmanned, to protect the boarders against illegal entry. And Gov. Perry, other than snarling at Romney, has proposed “defunding the UN.” The most sustained boo of the series was reserved for gay members of the military. And Romney’s most notable flip-flop is his latest position of support for a Constitutional amendment banning abortion after campaigning for governor of Massachusetts as an ardent supporter of a woman’s right to choose. This compendium is a brief illustration of how far to the right the Tea Party and social conservatives have dragged the GOP. Even Barry Goldwater, the conservative candidate for president in 1964 who started it all, wouldn’t recognize his own political party as it panders to the GOP’s wingnuts.

In another strange-bedfellows story, who but civil rights-minded Republicans would come to the aid of a black member of Congress, Rep. Donna Edwards, a Prince Georges County Democrat, to try and keep her district racially intact. Just before the Maryland General Assembly was to meet in special session to realign the state’s Congressional map, Republican lawmakers gathered with Edwards to support her objections to shifting 120,000 minority voters into Montgomery County to create a new Sixth District where a Democrat would have a better-than-even chance of unseating Republican Rep. Roscoe Bartlett. This is a fair-weather friendship that occurs across the country during the redistricting process. The political trade-off is that certain districts are blackened (liberal) so that others can be whitened (conservative) and both political parties wink at the deception.

The gerrymandering is a major contributor to the polarization in Congress and the courts are reluctant to intrude into what they consider a purely political matter. Nonetheless, Edwards lost her plea and her cause and the map was adopted with only minor adjustments. And in the give-and-take, most political rubberneckers have forgotten that Montgomery County was once the backbone of the original Sixth District that included all of Western Maryland. And now Maryland Republicans have joined hands with the Fannie Lou Hamer Political Action Committee in asking the U.S. Justice Department to investigate whether Democrats gerrymandered the new Congressional map for partisan gain. Put another way, Democrats commandeered a Republican seat, and Republicans want it back.

Cain is the current favorite of the GOP’s right flank, not because he can win the nomination but more for what he says. He’s kind of entertaining in the same way the Amos ‘n Andy show was good for laughs. In the land of the bland, the one-liner is king, and Cain’s zingers are catchy, well-phrased and the kind of black-baiting his audience wants to hear. In the case of a back-fire, he’ll often say it was a joke. Cain is now tangled in his nutty tax reform program, 9-9-9 (which has now become 9-0-9), which a rival candidate, Jon Huntsman, characterized as the price of a pizza, a reference to Cain’s chairmanship of the Godfather’s Pizza chain. Cain says he will simplify and replace the current tax code and reduce everyone’s tax burden. However, under a microscope, his tax plan is the usual Republican orthodoxy: 84 percent of the people will pay more taxes, and the only tax breaks will be at the top of the income scale. The 47 million poor people who pay no taxes will be forced to pay taxes under Cain’s proposal, and in states that have no sales tax, people will be forced to pay a nine percent national sales tax. But it gets better. Perry has revived the old Steve Forbes plan of a flat tax which, once again, provides tax breaks for high-bracket earners and shifts the tax burden to the folks at the bottom of the scale. What’s more, 45 states, including Maryland, have their tax codes tied to the federal income tax laws.

The GOP, for the moment at least, seems dazed and confused. It’s caught in one of those cyclical reinventions of itself in which it was supposed to subsume the Tea Party but the exact opposite has occurred. The Tea Party took over the GOP. The last great remaking of the Republican Party occurred in 1980 when Ronald Reagan was elected president with a mighty assist from “Reagan Democrats.” Reagan, in effect, tried to bring an end to the “New Deal” era of FDR, which he once embraced as a Democrat, and whose logical extension, believe it or not, was Republican Richard Nixon, the last truly liberal president. The sudden Republican embrace of blacks is truly a shotgun wedding that proves, they say, that Tea Partiers aren’t racist just because they despise President Barack Obama.