Who Says There's No Classism in America?

We may not be Great Britain, but does it surprise anyone that if you don't have any money you don't get any justice? 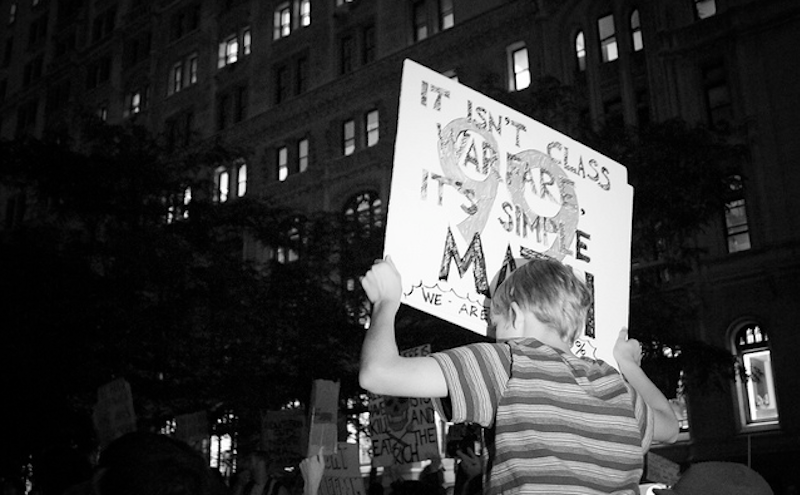 Over the past few days, which included a weekend in New York City, I engaged in several discussions concerning the Occupy Wall Street protests—where they came from, where they’re going, and how they’ll get there. There is a lot of conflicting information, diagnoses, and analysis floating around, which makes sense. The “Left” (scare quotes added to include the crazies, Marxists, progressives and liberals) is better at, and more tolerant of, dissent within its ranks than the “Right.” The Tea Party formed around vague policy aims and queasily racial themes; they backed up their umbrage by ushering in an insanely reactionary Congress. Bully for them. The OWS protestors are aligning under equally vague policy aims (and instead of reactionary racism, we’re seeing some pretty awful anti-Semitic rants). What remains to be seen is how the movement affects political outcomes. After all, elections matter, the process matters, and you can yell, “They took our jobs!” and “Eat the rich!” but it won’t matter if nothing has changed.

One example of troubling OWS analysis was posted on Splice Today yesterday. What I gather Tripp Weber’s point to be is this: America isn’t the place for classism and populism and agitation:

An enduring class war is nasty, and one that Americans must resist, despite how easy and tempting it might be in an economic downturn. Although English class issues have roots in a feudalist and monarchical past, what’s emerged from Zuccotti Park is a combative, neo-Marxist “them versus us” attitude that represents similar discontent and should be recognized as inherently un-American resentments. With no straightforward policy target comes frustration toward arbitrary groups (“Wall Street”), and a feeling of exploitation that is the driving force behind class tensions in Europe. For the sake of liberty, optimism, and social mobility, such assumptions and classism must continue to have no place in the United States.

This is an unfortunate conclusion, as it ignores many chapters in American history. From the resistance of Britain's taxation, to the huge oil/coal/rail monopolies that were busted up on the backs of social organization, to the civil rights movement that continues to this day. Populism and class-based agitation is a big deal throughout US history (as well as Britain's). This analysis is shallow; it glosses over troubling iniquities and, through rhetoric, supplants them with a conclusion (no class warfare, please) that is as vague as the protest’s claims (the claims he finds so unfortunately vague).

This spotted grasp of American history is seen again in his tangential line on race relations:

Terms in America’s founding documents such as “all men are created equal… with certain unalienable Rights … Life, Liberty and the pursuit of Happiness,” are not a coincidence or a whim. The words are highly deliberate and carefully placed to protect against classist hierarchies that the Founders observed in Europe. While America required decades to ensure that skin color didn’t preclude an individual from this protection, the United States has mostly been spared a legacy of “classism.”

It took "decades" to overcome discrimination in America? 250 years worth of systemic racism and disenfranchisement later... Christ, that's the kind of statement you expect from conservatives who nod approvingly at each other when they say Obama was elected because he was black, and that "reverse racism" is the real crime. Again, that gloss—it’s as if economic inequality and racism and systemic disenfranchisement are solely confined to The Jungle and Uncle Tom’s Cabin.

Weber’s argument is that classism has no places in the US (as opposed to Britain, what with its history of hating on people from Harvard—ah, I mean, Eton), and that when one becomes rich in the US, he or she is afforded all the amenities of the upper class that you see in Britain without having to wait a couple of generations or survive a civil war. It’s not clear why he thinks this to be true. We don’t have a royal class, for starters, but the simple fact that wealth begets wealth is true in pretty much any developed society. And what we’ve seen in the US is a growing and alarming disparity in terms of wealth and security. Whether it’s health care, financial advice or dilapidated schools, social mobility is stuck in a vast quagmire, here, and that is one of the reasons why groups like the Tea Party and protests like OWS form: a direct response to the growing inequalities that pervade daily life. And many of these inequalities are the result of generations worth of regressive taxation and policy.

Poverty and joblessness don’t just spring out of the ground, only to be washed away with tax cuts for the rich (that’s aimed not so much at Weber as it is the general mainstream Republican line of thinking). They’re the result of history, of institutions, of the top few percentage points of the public leaving the rest of us in the dust.