In cozying up to the elite, he may be worse than Bush. 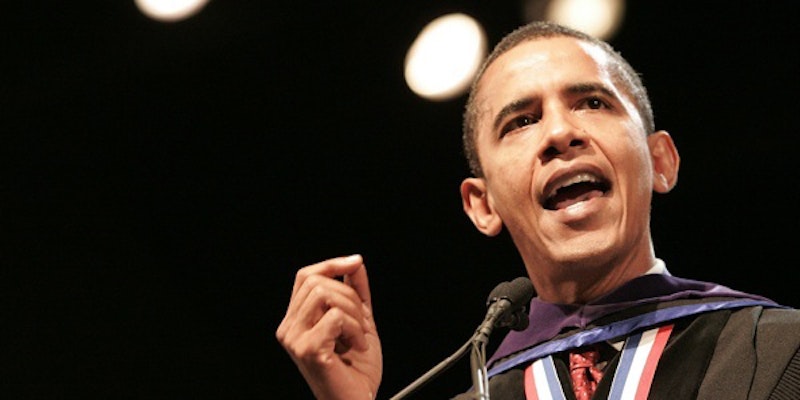 After two and a half years of Obama, Americans learn socialism doesn’t work:

Syndicated columnist Jonah Goldberg wrote in a November 2008 pseudo-retrospective on Obama’s presidency that, “It's hard to believe that just four years ago, some were talking about Barack Obama as a national savior, a secular redeemer, a ‘light worker.’  Even more shocking, President Obama lost the nomination of his own party to none other than Hillary Clinton. How did we get here?” In addition to recapping how Joe Biden’s embarrassing gaffes forced Obama to replace him, which “sapped his presidency of much of its energy,” Goldberg fantasized about how Obama’s cronies “demanded very large cuts in the military budget, a sweeping government expansion into the role of healthcare, and in a move that experts agree caused the Wall Street Panic of 2010, they persuaded Mr. Obama to make the government's partial ownership of the remaining ‘Big Five’ banks permanent.”

All too true. More than half way through Obama’s presidency, socialist liberalism has come to America, and it hasn’t been pretty.
First, the president’s soft foreign policy: he has increased defense spending to record levels, with a proposed total of $1.2 trillion  in real terms for 2012, according to military policy analyst Christopher Hellman. Todd Harris of the non-partisan Center for Strategic and Budgetary Assessments testified before the House Committee on the Budget that “The total national defense budget request for FY 2011, adjusted for inflation, is at the highest dollar amount since World War II and is higher than total defense spending at any point in the Vietnam or Korean Wars, even if the cost of the wars in Iraq and Afghanistan are excluded.”

Unlike the good old days, when George W. Bush responsibly presided over an aggressive right-wing military policy, Obama has overseen only five different wars—Iraq, Afghanistan, Libya, Pakistan and Yemen, in addition to dramatically increasing drone strikes, which have killed hundreds of civilians. He has further heeded the left by building new military bases in Afghanistan and Columbia (among others), and appointed Attorney General Eric Holder, who served as the lawyer for Chiquita Brands International, which was charged with funding Columbian death squads  (see 1:08:52). In addition to refusing to prosecute Bush for war crimes and the telecommunications corporations for illegally wiretapping Americans, Obama has expanded government secrecy and spying privileges. He has also failed to outlaw extraordinary rendition, which allows intelligence agencies to send prisoners to other countries to be tortured, and he has cracked down on more whistleblowers  than all previous presidents combined.

As Goldberg foresaw, Obama has initiated “a sweeping government expansion into the role of healthcare” by forcing tens of millions of Americans to buy healthcare from the for-profit insurance corporations. Rather than reforming the system, Obama has maintained America’s place as the only industrialized country that compels its citizens to obtain coverage from companies that are legally required to satisfy Wall Street shareholders, devote entire departments to devising excuses to decline coverage, and consider reimbursing sick patients a “loss.”

Obama has also expanded the number of people eligible for Medicaid at a time when state legislatures are enacting savage cuts throughout the country, leaving many who technically qualify for coverage helpless. Because of Obama’s socialist government takeover, the privatized insurance corporations now have tens of millions of new customers. Obamacare also permits the industry to continue to legally murder people through the ERISA law, “purge” small businesses that have too many sick employees to turn a profit, and shift more cost to patients by forcing them into high deductible Health Savings Accounts (HSA).

As for Obama’s socialist economic policies, he started off in a truly reformist spirit by immediately putting Tim Geithner and Lawrence Summers in charge of his fiscal program. These are the same free-market zealots who played a huge role in crashing the economy: Summers blocked regulation of exotic financial instruments such as credit default swaps and created the conditions for the housing bubble during the Clinton years by formally dismantling the Glass-Steagall Act, which originally barred commercial banks from taking heavy risks and hijacking the economy. Geithner regulated most of the financial firms that nearly imploded during the sub-prime mortgage crisis. Socialist that he is, Obama accepted massive campaign contributions from Wall Street and expanded the bailouts started by Bush in the greatest transfer of wealth in human history, rather than nationalize the big banks, restructure the banking system and prosecute the criminals on Wall Street. He has also extended the Bush tax cuts while effectively raising taxes for the poor.

Obama has further enacted policies enabling Wall Street firms to earn record profits and accrue even greater concentrations of power since the financial crisis began. The number of Americans in poverty is at about 50 million, and Obama has not created any serious government programs to put those people back to work. He has also neglected to pass legislation that would have made it easier for workers to form unions at a time when only 12 percent of the workforce is unionized, mostly in the public sector, which is unprecedented according to political scientists Jacob Hacker and Paul Pierson. Obama’s egalitarian impulses have left us with top one percent of Americans earning 23.5 percent of all income, which is more than the entire bottom 50 percent, and the disappearance of over 500,000 government jobs.

The truth is that Obama’s policies are arguably more draconian than his predecessor’s. These are the fruits of the corporate coup we have witnessed during the past few decades. The levers of power have been so thoroughly corrupted by campaign contributions, lobbyists and propaganda that real reform of any kind, from defense spending to health care to Wall Street, is impossible. Both parties are owned by the most powerful corporations, such as Lockheed Martin, WellPoint and Goldman Sachs, which renders political debate nothing more than theater.

The only form of socialism we have seen under Obama is the same version that has dominated our political system for a long time—corporate welfare. While the military-industrial complex and Wall Street receive billions in taxpayer subsidies the rest of the nation has been left behind because the politicians have no incentive to care. And yet, if you talk to a Fox News conservative you’ll hear all sorts of lies about how Obama intends to orchestrate a government takeover of health care and wage war against the free market, a war that he’s winning, as Rush Limbaugh declares every day. Or in the words of Goldberg from the New York Post, Obama will follow Barney Frank’s advice and take advantage of a “once in a lifetime opportunity to inject some social justice into the capitalist system.” If only any of that were true.

It is very useful to the power elite to portray Obama as at least hard left if not an outright socialist because they want to convince Americans that this is what progressive change looks like. By bombarding Americans with propaganda about how “big government” and “liberals” like Obama cannot bring them affordable health care and job security the corporate masters strengthen their case for free market fundamentalism and by extension control.

—Marc Adler can also be found at thebloodycrossroads.com.