Republicans Get Screwed by Their Leadership 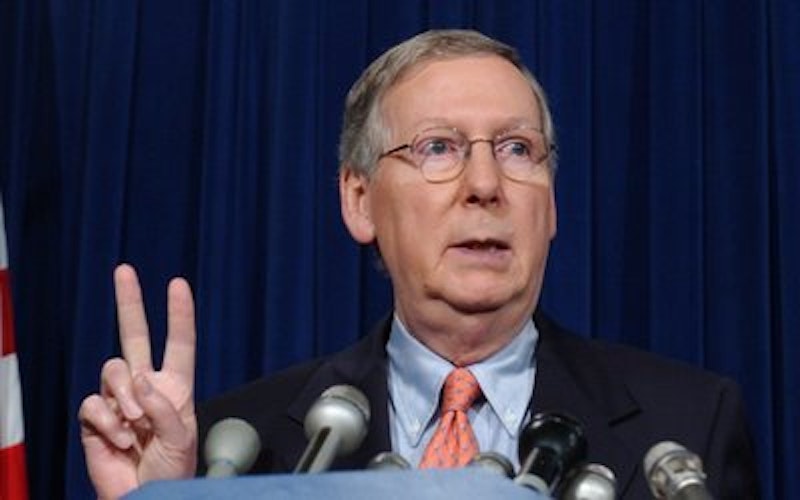 I’d be pissed if I were a Republican. Sen. Mitch McConnell’s “escape hatch” regarding the stalled and ominous debt-ceiling talks passes the buck to the President. After all the Tea Party-lathered umbrage over this vote, McConnell wants to simply claim a few extra political points by having the President raise the debt-ceiling, followed by a Congressional override, followed by Obama’s veto, which presumably is override-proof. In the words of Financial Times columnist Clive Crook: “How brave. How principled. Voters are expected to like this?”

I repeat: if I were a staunch Republican—smaller government, smaller social safety nets, smaller debts and smaller deficits—I’d be pissed.

Obama and House Speaker John Boehner were somewhat close to the brink of closing a deal involving $4 trillion debt-reduction package with a 3:1 ration of spending cuts and tax increases. Historic, massive, right-of-center, pick your talking-point hyperbole. Social Security, Medicare, very little Defense. A perfect Republican cocktail. That’s serious cheddar, cheddar that has and will elicit howls from the always-feisty-yet-always-compliant-where-it-counts Left.

It’s a bit mind boggling; Republicans control 1/3 of government and yet harnessed enough inchoate rage to push the other 2/3 all the way to their own goal line.

Boehner must sympathize with Obama, seeing as the both of them are held hostage by a near-lunatic groundswell of political posturing and cognitive dissonance.

And this is why I think I’d be a pissed off Republican: health care reform.

Liberal, I am, and conservative Democrats such as Sen. Ben Nelson were the bane of my existence throughout the push to enact a package of health care reforms once trumpeted by Republicans. Public option? Preferable, but I wasn’t about to lose it over that. My oceans of frustration came from the feedback loop of “You can’t govern if you don’t win, you can’t win if you don’t govern.” What are majorities for, if not to push through legislation you and your base and your ideologues and your scholars care about? And so I fumed, although somewhat alleviated by the fact that the Administration succeeded in getting shit done—some of it modest, some of it significant, all of it part of a package that does more to attack the rising costs of health care than pretty much any sitting official can claim.

I preferred something a little more liberal; I got something centrist and acceptable. With Republicans, the process is in reverse.
Three trillion dollars in spending cuts. Somehow, hard-line bullshitter Majority Leader Eric Cantor couldn’t see through his own talking points to notice how insane that is, couldn’t see through his own votes for massive debt-financed tax cuts (which constitute a significant chunk of the deficit we’re trying to bring down) and one of the single largest expansions (also debt-financed) of the welfare state since it was created, Medicare Part D.

No, Cantor couldn’t stomach it. Because it involved tax increases. Stone-cold stupidity, if I were a Republican.

Now the President looks to hold a slight edge in a fight so patently ridiculous. The President has a real shot at turning this whole charade on its head and forcing Congressional Republicans and presidential nominees to eat this bullshit for lunch, the appetizer being Paul Ryan’s Holy Grail of a Republican Budget: gutting and privatizing Medicare to finance yet more tax breaks for wealthy people.

This nonsense shifts seemingly every 16 hours, and it will stop being nonsense when Republicans successfully force the country into some sort of default through their own stunning lack of relativity—a form of shadow brinksmanship that wins nothing for conservatism.