GOP Should Blink and Give Obama a Pyrrhic Victory on Debt

President Obama’s been largely MIA on the debt ceiling talks, but Republicans ought to compromise and prevent financial panic. 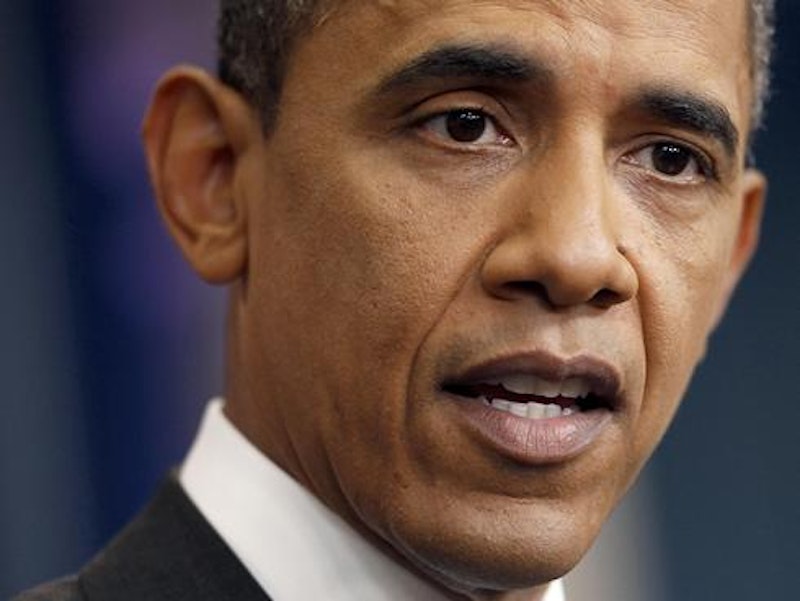 Last Saturday, on the way home in a cab after a fruitless visit to downtown Baltimore’s Barnes & Noble—which will pull a Borders if management doesn’t finally realize that its prices need to be close to Amazon’s—my teenage sons and I had a snap discussion about the debt ceiling impasse. At ages 18 and 16, the boys aren’t yet quite adept at debating politics—not enough background in American history, no thanks to their respective high schools—and when I ventured that presidential predictability had “gone the way of the Edsel,” they both groaned. Obviously, that’s a catch-all phrase familiar to middle-aged Americans, but I’ll admit their ignorance of the Edsel isn’t really all that different than my own regarding the term “facepalm.”

There was a time in American politics, as recent as, oh a decade ago, that when contentious debates took place in Washington you knew that once the president and narcissistic members of Congress had vented either on television or at the now-quaint press conference, with both sides vigorously insisting that a Constitutional crisis was at stake, a deal would be hammered out and victory would be declared by all. Perhaps I’m a touch naïve here, but it’s not such a stretch to imagine that the seemingly arbitrary date of Aug. 2 will arrive with no consensus in place and the markets will then go kablooey, 2008-style. The ingredients are all there: a feckless Barack Obama, who veers from conciliator to Democratic cheerleader to disengaged leader; the passive House Majority Leader John Boehner, who fears his ideological colleagues in what’s now commonly called by a dilettante media as the “lunatic GOP majority”; and an activist citizen contingent—both liberal and conservative—that uses social media to ratchet up the hate and distrust of anyone who doesn’t agree with them.

(I do wonder why there haven’t been mass demonstrations in Washington, D.C. over the economy. It’s happened in states this year, most notably Wisconsin and Ohio, but D.C. has been spared. I’m betting that Obama and members of Congress might act with more urgency—their recent modified all-nighters notwithstanding—if confronted with angry mobs of citizens.)

What was once grand political theater isn’t so much fun anymore. It’s sort of like a close baseball game in the late innings when crafty managers—say Joe Maddon, Tony LaRussa, Terry Francona and Joe Girardi—drive a spectator nuts by changing pitchers every other batter. And it’s worse when the game goes into extras and you say, I’m going to stay up for one more inning and the hit the hay, but can’t quite turn the game off and feel like a wreck at work the next day. Now, obviously this debt ceiling wrangling is a thousand times more important than a mere sporting event, but you get the drift. And the performances of the key actors have been so ludicrous and self-serving, that you wish King Solomon would appear and settle it all. My politics are economically conservative—the fuss over Rep. Paul Ryan’s plan for Medicare escapes me—but I’d rather see Obama, one of the worst presidents of modern times, reelected than a re-run of 2008 occur. Because really, what’s more important to real life: a lousy president in office or an economy that’s stable and growing?

So, if I were Solomon, some give and take would be on the table. I’m allergic to tax increases, since they kill entrepreneurism and small business, but letting the Bush tax cuts expire for the very wealthy is a concession I could live with. (And let’s be honest, the people it would affect, say entertainers, sports superstars, successful financiers, “star” journalists like Paul Krugman and George Will and the likes of Sens. John Kerry and John McCain, all employ accountants who’ll work around the new regulations, which is just one more reason for a flat tax.) Social Security? Raise the retirement age to 69, not in 2042, but now—giving a pass to those who are over 65. Furthermore, it’s not at all fair, but in the spirit of averting a massive crisis, why not eliminate Social Security checks to those who don’t really need them (indexed on net worth), while realizing that they spent a lifetime contributing to the fund? Oh, and how about just getting out of Afghanistan—every American, not just the higher-ups, so that no soldier is left to rot—and save a bundle there.

That’s a lot of conservative capitulation. So, on the other side, let’s bust up the national teacher’s union (NEA), not just in states, and bank a fortune by sacking “educators” who are protected by tenure and receive outsized salaries and benefits. Same with government workers. Take Obama’s pledge—whether he was serious or not is up to debate, but call his bluff—to cut $650 billion from Medicare, Medicaid and Social Security. And as a gesture of rare magnanimity, the symbolic halving of all Congressional salaries, as well as the President and his cabinet, would moderately please the public.

I’ve no idea what the ratio of political posturing to real danger is in the debt-ceiling imbroglio—Obama’s claim that if an agreement isn’t reached Social Security checks won’t be mailed out appears ludicrous—but the global markets are apocalyptic enough that who wants to take the gamble? Even Democratic piñata Grover Norquist, president of Americans for Tax Reform, said at the end of last week: “It is gambling with the economics of the country to get that far [default]. Rather than close the government down or go into default, let’s take it to the American people, go into the next election, and fix things then.”

If Republicans were smart—no guarantee—they’d call Obama’s bluff and agree to a package that would cut into entitlements and raise some taxes. The ideologues of the Party would howl, but so what? They could commiserate with the left-wing base of the Democratic Party, who believe Obama’s already conceded too much.