Privitization and lobbying have given some corporations the ability to commit murder with impunity. 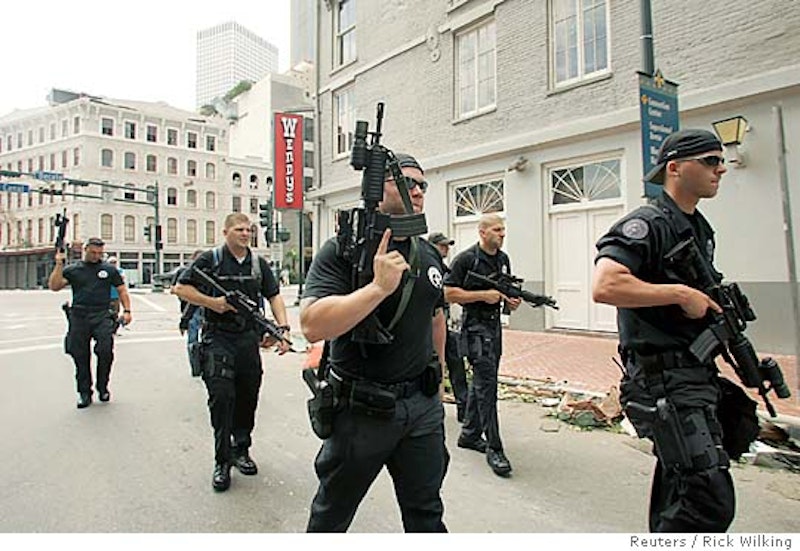 We often hear that corporations “get away with murder,” such as when the banks got bailed out and at worst faced meaningless fines, but many people are unaware of the many ways corporations are legally permitted to murder people. And we have virtually no recourse, at least through the current political system. In the worlds of for-profit healthcare, military contracting and privatized water supplies, corporations can murder with impunity.

In his book Deadly Spin, an Insurance Company Insider speaks out on how Corporate PR is Killing Healthcare and Deceiving Americans, Wendell Potter discusses a legal weapon called ERISA. It is one of the most Kafkaesque mechanisms in America, and that’s saying something in the post-9/11 era. Originally designed to help workers protect their pensions during the 1970s, ERISA, or the Employee Retirement Income Security Act of 1974, has been transformed into a tool to make insurance companies immune from lawsuits for refusing to provide healthcare.

Potter devotes a chapter of his book to the story of Nataline Sarkisyan, a little girl who was ruthlessly denied coverage for a transplant by CIGNA and died. Her family tried to sue, in vain. Because ERISA is a federal law, it is exempt from state laws, such as consumer protections and benefit mandates, and it renders state insurance commissioners powerless to regulate ERISA-protected plans. Consequently, “the 130 million Americans enrolled in ERISA-protected plans,” Potter writes, “cannot sue their insurance company or employer in state court if they have been denied coverage for a treatment or procedure, as Nataline was.”
And those who attempt to sue in federal court are wasting their time: “Few lawyers sue insurers in federal court because, under ERISA, the only remedy their clients are entitled to receive—even if a judge and jury agree they’ve been wronged—are the costs the insurer refused to cover,” according to Potter. So this exempts insurers from paying “punitive damages, and compensation for pain, suffering or lost wages.” And if you die, “the insurer cannot be ordered to pay anything to the patient’s survivors.” As Jamie Court, author of Making a Killing, explains, “Imagine that the penalty for bank robbery was limited to giving back the stolen money. No jail time, no fines, just pay the money back—and only if you are caught. To top it off, the repaid money would be interest free. Would bank robbery increase under such circumstances? That’s the situation HMO’s and insurers enjoy under ERISA.”

This evil policy remains in place because the public is largely unaware of it, and whatever they do know is largely spun by the insurance PR machine, which creates front groups, such as the National Coalition of Benefits, to defeat any attempts to abolish ERISA through fear-mongering campaigns about how reform would prove too costly for insurers, who would be forced to deny healthcare to hundreds of thousands of patients.

Military contractors have similar freedoms. In his book Blackwater, the Rise of the World’s Most Powerful Mercenary Army, Jeremy Scahill discusses how Paul Bremer, the U.S. administrator initially in charge of Iraq’s reconstruction, issued a decree called Order 17, granting immunity to all contractors from prosecution. “Not a single armed contractor, for Blackwater or any other firm, has ever been charged in any court anywhere with any crime against an Iraqi,” Scahill writes. This “climate of total impunity” did not come about by chance, according to Michael Ratner, president of the Center for Constitutional Rights, the “very purpose is to brutalize and strike fear into the people of Iraq.”

The Washington Post has reported that, “a former Blackwater guard who spent nearly three years in Iraq, said his 20-man team averaged ‘four or five’ shootings a week.” The only repercussions, if there are any, are fines and firings. In one instance a Blackwater operative murdered the bodyguard to Iraq’s Vice President and only lost his job. As New York Democrat Carolyn Maloney said in a Congressional Hearing, “If he [the operative] lived in America, he would have been arrested, and he would be facing criminal charges… If he was a member of our military, he would be under a court-martial. But it appears to me that Blackwater has special rules.”

And it enjoys this status because of its enormous influence in Washington. Blackwater protects American diplomats in occupied countries, including every member of the State Department, which is in charge of investigating Blackwater’s crimes. It also had extremely close ties to the Bush administration, particularly through its founder Eric Prince, and Scahill asserts that, “The occupation of Iraq would have been practically impossible to carry on without them.” These connections also explain why Blackwater receives 90 percent of its revenue through government contracts, even though it charges “six times as much” as the U.S. Army, according to California Democrat Henry Waxman, who explained in the aforementioned Congressional hearing that “sergeants in the military generally cost the government between $50,000 to $70,000 per year,” while “a comparable position at Blackwater costs the federal government over $400,000.”

The Safe Drinking Water Act of 1974 has largely functioned in a similar manner to ERISA and Order 17. It essentially permits polluters to dump as much as they want into the country’s water systems with impunity. As the New York Times reported in December 2009, “The 35-year-old federal law regulating tap water is so out of date that the water Americans drink can pose what scientists say are serious health risks—and still be legal.” This is because “not one chemical has been added to the list of those regulated by the Safe Drinking Water Act since 2000.” Amazingly, “only 91 contaminants are regulated by the Safe Drinking Water Act, yet more than 60,000 chemicals are used within the United States,” many of which pose serious risks of cancer and other awful diseases contracted from small concentrations of drinking water.

Consequently, “millions of Americans become sick each year from drinking contaminated water, with maladies from upset stomachs to cancer and birth defects.” For example, “the drinking water standard for arsenic… is at a level where a community could drink perfectly legal water, and roughly one in every 600 residents would likely develop bladder cancer over their lifetimes,” which “is roughly equivalent to the risk the community would face if every person received 1,664 X-rays.” The problem is so pervasive that “more than half of the systems analyzed by The Times had at least seven chemicals in their water. But there is nothing in the law that addresses the cumulative risks of multiple pollutants in a single glass of water.”

Why does this go on? Privatization and lobbying. Three quarters of the nation’s water systems are owned by private corporations, according to the Times, who don’t want to spend money to eradicate dangerous chemicals (although a company called American Micro Detection Systems has recently created a new technology that can enable companies to cheaply monitor contamination in real-time). And many other companies do not want to pay billions to clean up after they dump toxic materials in our water. So they unleash their armies of lobbyists to choke off regulation and push issues off the agenda, as the authors of Winner-Take-All-Politics describe. Military contractors, for example, employed a typical tactic when it fought off the EPA’s effort to regulate percholate by calling the science “biased” and uncertain and accusing EPA scientists of being unpatriotic for claiming military bases were contaminated.

This strategy permeates the climate change “debate,” hampering efforts to stave off collective suicide. Indeed, as long as we allow the corporations that control America and by extension the world to continue murdering people with impunity we will all be destroyed by the death spiral, sooner or later.