Does the now infamous quote in the Family Leader pledge Michelle Bachmann and Rick Santorum signed have even the tiniest basis in reality? 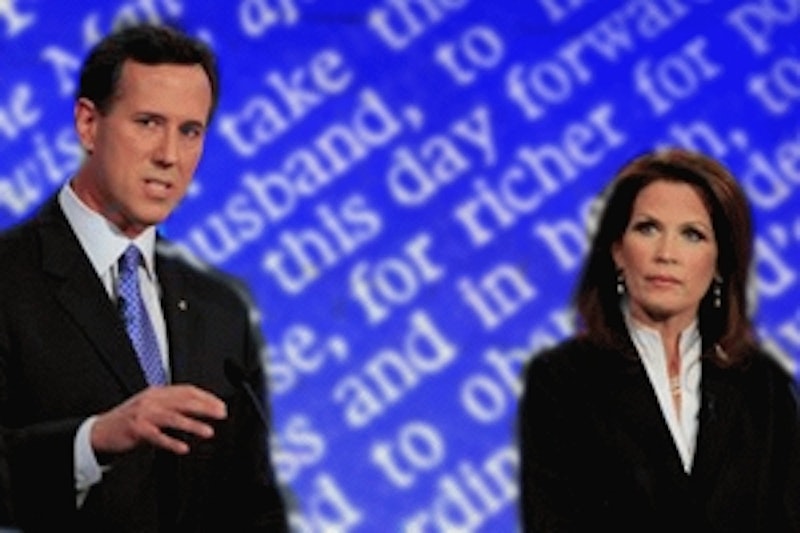 Far-right presidential contenders Rick Santorum and Michele Bachmann look like idiots because of a Christian political pledge they signed. The sponsoring group had stuck in the preamble a freewheeling sentence about slavery and the black family. After the general public heard about the sentence, the Christian group prayerfully reconsidered and pulled it out. But by then Bachmann and Santorum had signed. In effect the race’s two most Christian Right candidates were boobytrapped by their own side.

Here’s the sentence: “Slavery had a disastrous impact on African-American families, yet sadly a child born into slavery in 1860 was more likely to be raised by his mother and father in a two-parent household than was an African-American baby born after the election of the USA’s first African-American President.”

It’s right at the top of the preamble, meaning it’s the opposite of the fine print. Either the candidates saw it or they signed without reading. Anyone should have been able to tell that the preamble’s sentence was poison—don’t ever, in any way, get close to suggesting that even a single aspect of life under slavery might make sense at the expense of today’s society. From the point of view of rational thought, anyone signing should have known that the sentence needed a look by somebody with expertise.

Or so I would put it. But I’m off base, according to some political writers I like. Dave Weigel, for example, calls the sentence “so revealingly stupid, so ideological and cartoonish, that you have to wonder about someone who reads it and says ‘yes, great point.’” Whereas I read it and said, “Dubious point, but who knows.” There’s a lot of distance between cartoonish and dubious. How did I get all the way over here?

To me, the point in question doesn’t turn on the superiority of slavery over freedom. Freedom is better; everyone knows that. Here’s the question that comes to my mind: Is it easier to manage human property if family members are kept together? And I have no idea as to the answer. I don’t know the history of American slave families. I don’t know the research into manipulation and control of people who are involuntarily confined or indentured.

Maybe such people are easier to keep in line if they have something to lose, such as their children or brothers or sisters or parents. Maybe they work harder if their lives aren’t gratuitously ravaged. If so, maybe America’s slave masters realized this and, on balance, were more inclined to keep families together than break them up. And maybe post-slavery life for American blacks has been so brutal for so long that the percentage of black two-family parents today might possibly be smaller than the percentage a century and a half ago, if statistics were firm enough to make a reliable comparison.

Or maybe not. Offhand, I wouldn’t know. All I know on the subject is that things were bad—as the preamble says, “disastrous.” The late Sen. Daniel Patrick Moynihan said that slavery screwed up the black family, which also seems to be what the preamble means with its reference to “a disastrous impact on African-American families.” Apparently this is something everybody knows, even people writing preambles about how bad the two-parent household has it now compared with slavery days. But I have no idea whether this badness translated into the widespread nonpresence of two-parent families among the slaves. At least, I don’t know whether the badness translated to the extent necessary for there to have been fewer two-parent households among blacks back then than there are today. I mean, given that America spent many decades screwing over post-slavery blacks, and given that two-parent families face a general decline these days (the whole point of the preamble, really).

Does everyone else have the facts on the slave family right on tap? Weigel links to what he calls a “cursory” treatment of families under slavery at the site for a PBS series, and the treatment’s bio identifies the author as the holder of “a doctorate in Art from the University of Pennsylvania.” Knowledge of the slave family may be so widespread that even random degree holders can be counted on to function as authorities on the topic. If so, I’ll note a point made at the treatment’s start, one click back from the page linked by Weigel. It’s this:

“By the early 1700s, however, planters in both the Chesapeake region and in the Southern low country were becoming aware that they could profit economically by promoting the families their slaves were struggling to create. Marriage, they reasoned, would make slaves content and therefore docile. What is more, stable unions would lead to reliable reproduction cycles. This idea of a self-renewing slave labor force was exploited on a grand scale for the first time on the plantations of late eighteenth century America, increasing in intensity after 1807 when Congress outlawed international slave trade.” (Ed: Slave "marriages", were in fact illegal, and often seperated by the auction block.)

Found it just now; Weigel should have taken a look. That’s not an argument for slavery, of course. That’s an argument against certain basics of the American racial order that existed during slavery and have persisted since.