Obama's gay rights breakthrough comes with some insults to the intelligence. 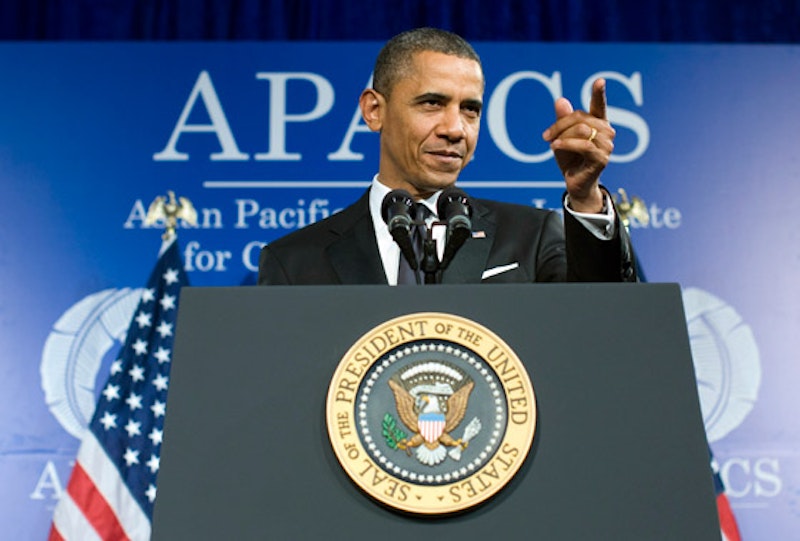 Yes, it’s bullshit, but bullshit is everywhere. You even get it with historic moments of conscience; at least the history still happens. So we have President Obama deciding he’s for gay marriage after all, and we get a wind-up that involves three statements that we know aren’t true:

“I have to tell you that over the course of several years as I have talked to friends and family and neighbors, when I think about members of my own staff who are in incredibly committed monogamous relationships, same-sex relationships, who are raising kids together; when I think about those soldiers or airmen or marines or sailors who are out there fighting on my behalf… at a certain point I've just concluded that for me personally it is important for me to go ahead and affirm that I think same sex couples should be able to get married.”

He exhales high-minded blather so easily. But no, this decision of his wasn’t personally important, it was politically important. And Obama didn’t change his mind because of the staffers and the service people. Instead he had to stop faking a non-belief in gay marriage because Joe Biden opened his mouth and, as so often, acted as if political fact could be openly discussed. The fact in this case was that Obama’s long-standing pose of pondering the matter did not keep the President from believing that gays and straights should have the same rights. By Obama’s own account, the monogamous staff members and the constrained service men and women exercised their influence for years without producing anything too drastic. Whereas Biden spoke up on Sunday and Obama got done evolving on Thursday—three days.

To take Obama’s words literally, the gays who influenced him didn’t even include friends, just professional associates. When does a Hyde Park liberal intellectual fail to mention his gay friends? When he’s been elected president and is crawling out further on the gay rights limb than he expected to go. Instead Obama pulls in some regular folks—“as I have talked to friends and family and neighbors”—just so he can mention them and offset the gayness.

The moral calculus. Obama believed in gay marriage back in 1996, when he was an up-and-comer checking boxes with liberal activist groups. He stopped believing when his political environment changed. Now he has believed himself right back, and all the while he’s been pulling at his chin and talking about what a heavy matter it all is. He presents a disgusting spectacle unless you believe three things, and here they are.

First, that any way in which gay rights happens is probably a way that’s good enough. Second, that a working politician probably knows what he or she needs to say or not say in order to stay in the game. And, third, that losing elections, including your own, doesn’t do much for the causes you favor. Luckily I do believe those things. It helps that there isn’t and hasn’t been much that Obama could do about gay marriage on a policy level. So Obama gets an eye roll from me and that’s it. Of course, take out the first of the three factors and substitute, say, belief in a fetus-personhood amendment, and my eye roll would come along with a face and gagging sound. But I wouldn’t decide the person was beyond the pale just because of the fancy dancing about belief. It takes a lot of hypocrisy before a politician exceeds his or her professional quota.

Weak-kneed heroes. My favorite bit of analysis so far: “There will be a lot of cynical media analysis to the effect that Obama only did this because Joe Biden forced him to do it and because his ‘evolving’ position had become impossible to sustain.” That’s Greg Sargent, who writes the blog Plum Line for The Washington Post. He wrote the above right after saying Obama had to be pushed into making the statement.

Sargent displays what I call Allahpundit Syndrome, after the intelligent and fair-minded blogger at the right-wing site Hot Air. Allahpundit frequently finds himself agreeing with someone who should be wrong, such as a liberal analyst or a reporter for a major news outlet. To recover, he presents that person’s views as entirely typical of such a person’s benighted motives and viewpoint. Then he can go ahead and acknowledge that Bristol Palin will probably be a jerk about Dancing with the Stars, or that the reaction of the right-wing justices to the Obamacare arguments has been a bit of a surprise given earlier Supreme Court rulings on related topics.

Here’s the uncomfortable fact that Sargent, over on the liberal side, has to finesse: Liberal heroes are often at their best when they aren’t being so much heroic as jerked around. Progressives champion the excluded, and the excluded usually don’t command public opinion. Often enough they’re on the shady side of the popular/unpopular divide, and the leader who steps forward to speak for them may well have been pushed. So it was with John Kennedy and civil rights, so it has been for Obama and the gays.