Fortunately, gays and lesbians will change the institution of marriage for everyone else. 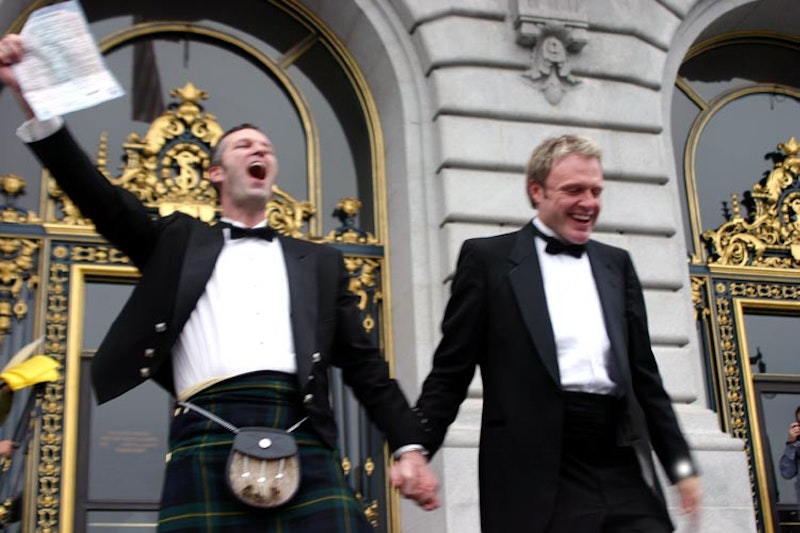 A couple of days before North Carolina voted for officially sanctioned homophobia and Barack Obama voted against it, Maggie Gallagher recorded a video making the case that gay people marrying each other are a deadly threat to the institution of marriage.

I realize that many people disagree with me, but if you ask me why am I involved in this, it's because the framing ideas of marriage are the most important and the most powerful thing about it, and you cannot get to same-sex marriage without denorming and changing and really transforming the basis of marriage in the public square. And I think it's really frankly going to lead to a marriage that is weaker and weaker and less and less coherent… I think it is the end of the project of trying to revive marriage as a public institution.

For Gallagher, then, gay marriage threatens the "framing ideas of marriage." She doesn't quite say what those ideas are, but presumably they have something to do with marriage as a bond between one man and one woman, husband and wife, and (ideally) father and mother.

Folks like Andrew Sullivan (on whose blog Gallagher's video appears) generally counter these arguments by arguing that, in fact, the "framing ideas of marriage" are not one man, one woman, and certainly not the rearing of children. Rather, marriage, they argue, is about love, not gender roles. From this perspective, gays and lesbians getting married doesn't hurt the core principals of marriage. On the contrary, it solidifies them. That's why, for Sullivan, gay marriage is a conservative movement. It simply includes gay people as equals in one of the organizing institutions of our society—an institution designed expressly to integrate individual love and relationships into society. Thus, for Sullivan, marriage is a way for gay people to learn from, and become like—the same as—straight people.

Here, for example, is Sullivan in 2008, reflecting on his own marriage.

The wedding occurred last August in Massachusetts in front of a small group of family and close friends. And in that group, I suddenly realized, it was the heterosexuals who knew what to do, who guided the gay couple and our friends into the rituals and rites of family. Ours was not, we realized, a different institution, after all, and we were not different kinds of people. In the doing of it, it was the same as my sister’s wedding and we were the same as my sister and brother-in-law. The strange, bewildering emotions of the moment, the cake and reception, the distracted children and weeping mothers, the morning’s butterflies and the night’s drunkenness: this was not a gay marriage; it was a marriage.

I like marriage too. I've been married 12 years, as a matter of fact. Marrying my wife was probably the single best decision I've made in my life; the only real competition is the decision we made to have our son. Moreover, as it happens, just a few weeks ago I got one of those online ordinations and was, as the theists says, blessed to preside over the wedding of two of my dearest friends.  So… marriage. I'm for it.

I think, though, that it's worth recognizing that, wonderful as marriage can be, it also has some serious downsides. If marriage can be the best thing in the world, then it can also be the worst. If you doubt it, I suggest you read Judith Herman and Lisa Hirschman's 1981 book Father-Daughter Incest—undoubtedly one of the most depressing tomes I've ever read.

Herman and Hirschman reveal marriage as an institution not of love, but of dominance, cruelty, violence, and, above all, of rape. Moreover, they argue that rape is not an accidental, perverted result of traditional marriage—rather, it is the logical culmination. Through their work with incest victims, the authors conclude that father-daughter rape occurs most often not in perverse or abnormal marriages, but rather in hyper-normal ones.

Specifically, incest is most likely in families where the father takes the traditional role of a dominant, authoritative (not to mention authoritarian) patriarch. Incestuous fathers are generally competent workers, good providers, and respected in the community. Mothers in these families, on the other hand, are almost caricatures of feminine disempowerment. They often don't work outside the home, and may be ill, depressed or exhausted; in large part because their husbands abuse them physically and emotionally.

According to Herman and Hirschman, the emphasis on traditional sex roles within marriage—a strong father little involved in child-rearing, a weak mother unable to effectively protect those in her care—leaves children vulnerable to rape. The father sees the daughter as essentially a perk of patriarchal power—patriarchal power the mother cannot effectively counter. The authors conclude, "As long as mothers and children are subordinated to the rule of fathers, such abuses will continue." They add that this is a tragedy not just for children and mothers, but for fathers as well, who "As long as [they] retain their authoritarian role… cannot take part in the tasks or the rewards of parenthood."

Of course, most marriages do not have much to do with the caricatured gender roles that Herman and Hirschman identify as typical of incestuous families. But still… those caricatured gender roles do have something to do with marriage. They are one distorted image of marriage's essence—of marriage designed not as an outgrowth of love, but as an outgrowth of patriarchy and rigorously codified gender roles. Many radical queer activists have opposed gay marriage for just this reason. For them, marriage is, at its core, oppressive and inequitable.

I think they're wrong—marriage isn't inequitable at its core. But Sullivan and Gallagher are wrong, too, when they claim that the essence of marriage is beneficent. The truth is that marriage doesn't have an essence, any more than it has a core. Certainly, marriage is an institution, but institutions aren't immutable. They shape us, but we shape them, too. Marriage has been, and can still be, a way to oppress women, to enforce particular gender roles, and even to abuse and torture children. It has also been, and can still be, a way to link family and community in love.

Gallagher is correct when she suggests that gay marriage will change the institution of marriage. Marriage has, in the past, been about one man/one woman, just as Gallagher says; it's been an assertion that gender and gender roles are as important as, or even more important than, what you feel in your heart.

Gay marriage is a final, absolute refutation of that logic. If two men can get married, or two women, then marriage must really be not about power, but about love. Gay marriage, then, is radical in the best sense, in that it offers equality and hope not just to gay people, but to children, women, and men of every orientation—even to Gallagher, resist it as she will. Gay marriage is not just about straight people accepting gays into our institutions. It's about gay people teaching us what those institutions mean. The gay community has given straight people a lot over the years, but surely gay marriage is one of the greatest gifts it has offered us. Despite North Carolina, despite Maggie Gallagher, I still believe, as I believe in my marriage, that we will, someday, humble ourselves enough to be worthy of it.