Master of The Capriole

Mitt Romney is good at jumping up and down, but not so adept at moving forward. 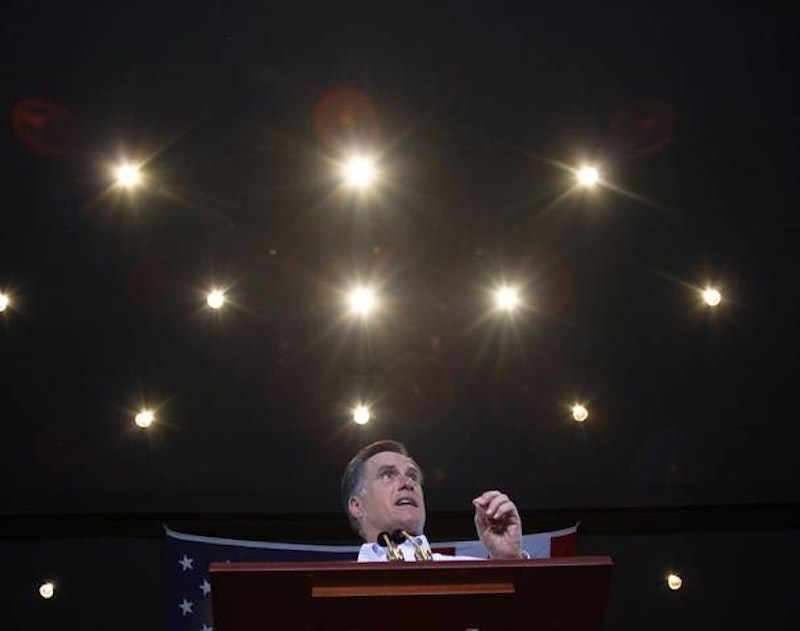 Politics and economics toddle hand-in-pocket through the presidential campaign like the perfect partners that they are. While Mitt Romney attempts the forewarned Etch-A-Sketch conversion from “severely conservative” to middle-ground mush, hoping that no one will notice, President Obama is energizing college campuses by reminding students of the college debt load that he and his wife finally paid off only eight years ago.

Romney is the master of the capriole, a balletic and equestrian term that denotes lots of jumping up and down with no forward motion. Hear Romney’s five-state election night faux epiphany when he finally, more or less, nailed down the Republican presidential nomination. Romney said that he envisions “an America driven by freedom, where free people pursing happiness in their own unique ways, create free enterprises that employ more and more Americans. And because there are so many enterprises that are succeeding, the competition for hardworking, educated, skilled employees is intense, so wages and salaries rise.” Details, please.

Now hear Obama at the University of North Carolina: “And this is something [student loan debt] that Michelle and I know about first hand… Michelle and I have been in your shoes. Like I said, we didn’t come from wealthy families. So when we graduated from college and law school, we had a mountain of debt. When we married, we got poorer together. We added up our assets and there were no assets. And we added up our liabilities and there were a lot of liabilities, basically in the form of student loans. We paid more in student loans than we paid on our mortgage when we finally did buy a condo. For the first eight years of our marriage, we were paying more in student loans than we were paying on our mortgage.

It’s easy to see where’s we’re going with this. Put aside, for a moment, the tired observation about connectivity. The universal shorthand conclusion is that Obama has it, Romney doesn’t. And ignore the implicit spitballs that Obama tossed at Romney to underline the distinction between the rich white guy and the poor black kid, though it’s a terrific yarn. The contrast between the two snippets of speech presents a worldview as well as a lesson in applied economics.

Romney made his money the easy way, by simultaneously getting a Harvard law degree and an MBA, then cherry-picking companies for their vendible assets and discarding the rest, employees and all, to the junk heap. Obama took the student loan route through Harvard Law School and achieved the dream by being a facile enough writer to publish a couple of hugely successful autobiographical books that still sell well.

Romney’s market-driven economics is pure Friedrich Hayek and Milton Friedman with a touch of David Ricardo’s “iron law of wages.” Obama, by contrast, is guided by John Maynard Keynes’ principles that government has a major role in regulating the economy. Government, as it has evolved today, is in the quality of life business. Finally, Romney has warmly embraced the catchpenny budget of Rep. Paul Ryan (R-Wis) which, probably to his regret, he described as “marvelous.”

Ryan’s budget, as endorsed by Romney, would impose European-style austerity in the United States by cutting taxes for the rich and cutting programs for the poor and the elderly and raising interest on student loans. (To his credit, Romney joined Obama in opposing the Republican proposal to double the student loan interest rate from 3.8 to 6.8 percent. Taking Romney’s cue, the Republican-led House approved holding the current low student interest rate loan by funding it with $4 billion in cuts for women’s health care services such as mammograms and pap smears.) Yet Romney stepped in it again. His solution to the tuition payment problem: Students should borrow money from their parents.

Many observers believe that the austerity imposed on European nations at the insistence of Germany will lead to the eventual collapse of the Euro-zone and the Euro itself as a common currency. Great Britain, for example, as part of its austerity program, insisted on wholesale cuts in government spending and has now slipped back into a full-scale recession. Much of the difficulty is that European nations that are tied to the Euro do not control their own currency and therefore cannot manipulate their monetary policy. They must borrow money at outrageously high interest rates. Unemployment rates in Europe expose the fallacy of austerity: Spain, 24.4 percent; Greece, 17.7 percent; Portugal 15 percent; France, 10 percent; and Italy 9.3 percent.

By comparison, America took the opposite approach of austerity with aggressive government action and is slowly emerging from the near collapse of the economy in 2008. While European nations tightened their economies, Obama and America went on a pump-priming spree that has performed as Keynes said it would. The auto bailouts worked. TARP worked. Extended unemployment benefits worked. And so, too, did the Federal Reserve’s easy money, low interest rate policies. New jobs are up and unemployment claims are down. And the housing slump is expected to bottom out by summer. Economists are now anticipating that the unemployment rate will soon fall below eight percent. These policies are exactly the opposite of those that the Ryan-Romney budget proposes.

The free market policies advocated Ryan and endorsed by Romney were the hallmark of the eight years under President George W. Bush which helped lead to near economic disaster and the mess that Obama was forced to clean up. It is pure Republican orthodoxy, now as then, to cut taxes for the rich with the pipedream notion that they will lead to job creation (see Romney quotes above). Bush cut taxes for the rich twice, in 2001 and 2003, and studies show that the cuts resulted in the lowest economic growth of any eight-year period since World War ll. Today, businesses are sitting on cash hoards of $3 trillion that they are reluctant to invest to create new jobs. Banks, as well, are resisting new loans and financing for business. American businesses may be creating jobs, all right, but they’re doing it overseas.

The Ryan budget, and orthodox Republican economics, are stuck to Romney like Krazy Glue. Try as he might, there’s no way he can shake them off. Even the Catholic Church has criticized Ryan’s budget proposal and Ryan, a Catholic, for what is considered the misinterpretation of Catholic teaching. Following initial criticism by the conference of Catholic bishops, a group of Georgetown University faculty members denounced Ryan and his spending plan for his “continuing misuse of Catholic teaching to defend a budget plan that decimates food programs for struggling families, radically weakens protections for the elderly and sick, and gives more tax breaks to the wealthiest few.” Ryan and Romney ought to realize that it’s foolhardy to get God angry in the middle of a presidential campaign.