God In The Machine

The President's stance on gay marriage has voting implications nationally as well as within Maryland. 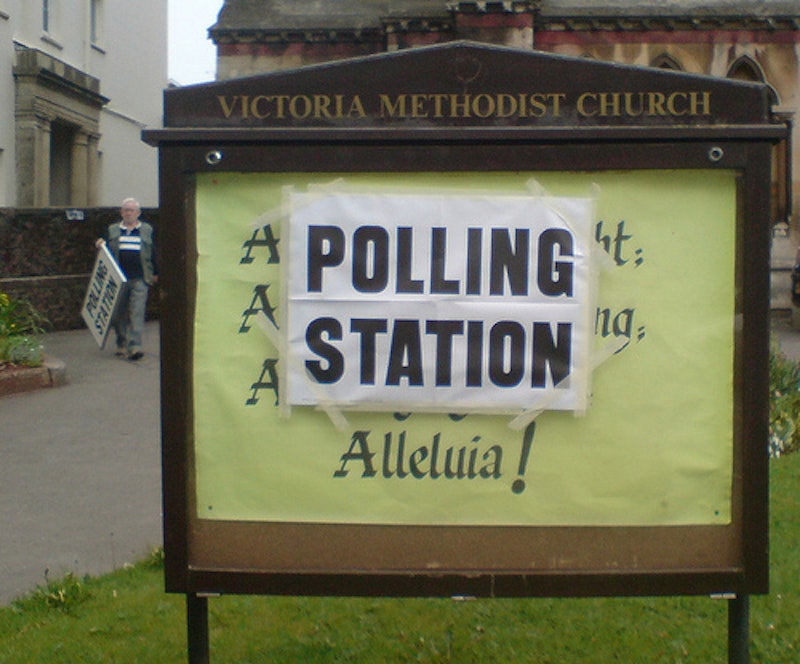 Politics and religion are a toxic mix. Usually they should butt out of each other’s business. When politics invades the pulpit and religion intrudes upon the voting booth, they blur into a danger to the nation’s health. But once again, church and state, liberals and conservatives, have collided at the doorway to the bedroom. Same-sex marriage, like birth control and abortion, has become a political pajama game.

President Obama’s forced declaration of support for gay unions was an historic occasion and a cause for celebration among gay activists, but it was also a gift to those who oppose such a dramatic departure from the traditional definition of marriage. Same-sex marriage provides a stark contrast between the political parties as well as the candidates and is likely to be the definitive social issue of the presidential campaign.

Traditionally, conservatives argue that government has no place in the bedroom. Funny thing. Liberals (now called progressives) make the same point. Where they depart is that conservatives believe that religion does have a role in sexual behavior while liberals tend toward the side of personal choice.

Let the numbers do the talking. Gay marriage has been rejected everywhere it has appeared on the ballot. At least 30 states have outright bans on same-sex marriage, with North Carolina being the latest to vote on the issue. But the North Carolina ban went a step beyond. It included a prohibition of civil unions as well. A dozen states recognize civil unions and/or domestic partnerships. Only six states and the District of Columbia grant same-sex marriage licenses while two states—Maryland and Maine—have legalized gay marriage but the laws are on hold pending voter action.

On the same day that Obama endorsed same-sex marriage, Mitt Romney clung to his position that marriage is a union between a man and a woman even though he comes from a religious culture, the Church of Latter Day Saints, that encouraged marriage between a man and many women. When the state of Utah banned the practice of polygamy, Romney’s ancestors moved to Mexico to circumvent the prohibition. Romney says that as president he would fight for a constitutional amendment banning gay marriage. But, trying to have it both ways, Romney says he approves of gay couples adopting children.

But Romney has a credibility problem on the issue of same-sex marriage. An AP poll revealed that only 31 percent of those surveyed believe that Romney says what he believes and that 32 percent don’t trust him on the issue of gay marriage.

Nowhere is the battle over same-sex marriage more sharply focused and dramatic than in Maryland, where Obama and a referendum on the issue will share space on the November general election ballot. The gay marriage law was enacted during this year’s General Assembly session with the out-front support of Gov. Martin O’Malley (D) and two Republican members of the House of Delegates after it narrowly passed the Senate.

Upon Obama’s endorsement, O’Malley issued a statement saying that “Today, President Obama affirmed that the way forward is always found through greater respect for the equal rights of all.” The law is being petitioned to referendum by a broad and disparate cohort of Republicans, evangelicals, blacks and Roman Catholics.

As every political hobbyist knows, Maryland is solidly 2-1 Democratic. The bulk of the Democratic Party resides in five jurisdictions along the I-95 corridor—Montgomery, Prince George’s, Howard and Baltimore Counties as well as Baltimore City. While the center of the state is blue, the margins are red. Maryland’s black population is 33 percent, the largest of any state outside the Deep South. Prince George’s is 75 percent black, Baltimore City is 68 percent black and Howard has a sizeable black population. There are now more than 470,000 Hispanics in Maryland—nearly all of them Catholic—the majority of whom live in Prince George’s and Montgomery Counties. The critical question is how the crosscurrents of Obama’s presidency and the issue of same-sex marriage will intersect in the voting booth. In Maryland, the showdown will be between the vaunted O’Malley (and Obama) organization and the religious lobby.

For the Catholic Church, the devil is, as usual, in the details if not right out front. The Catholic bishops have been highly critical of Republican efforts to cut spending on social programs, especially those that affect the poor and the elderly. But they have also castigated Obama’s health care plan which they claim would force Catholic institutions (other than churches) to provide contraception as part of their health care coverage. This, they claim, violates religious freedom. And they are avowedly opposed to same-sex marriage. The issue of gay marriage is especially awkward for the Catholic Church because of its problems with homosexual priests and pedophiles as well as the sexual exploits of clergymen, gay and straight, of other religious denominations.

In Maryland, members of the clergy are already sermonizing against the new law and are advocating that parishioners sign petitions after Sunday mass. The new archbishop of Baltimore, Bishop William Lori, is an outspoken conservative hardliner and an advocate for the preservation of traditional marriage. There are 500,000 Catholics in Maryland spread across three dioceses—the Archdiocese of Baltimore, the Archdiocese of Washington and the Diocese of Wilmington.

Churches are 501 (c) (3) tax exempt organizations. Under the Internal Revenue Code, “all section 501 (c) (3) organizations are absolutely prohibited from directly or indirectly participating in or intervening in, any political campaign on behalf (or in opposition to) any candidate for elective public office… Public statements of position (verbal or written) made on behalf of the organization in favor or in opposition to any candidate for public office clearly violate the prohibition against political activity.” Representatives of churches, of course, would argue that they are speaking out against a political position and not a candidate. But in politics, an attack on one is an implied attack on the other. The prohibition is honored mainly with a wink.

Blacks are similarly opposed to same-sex marriage but it is doubtful that they would abandon the first black president over the issue. Many black legislators, even though Democrats, refused to support gay marriage legislation this year and were numerically the cause of its defeat two years ago because their pastors oppose it. In the last election, Obama won 60 percent of the female vote, 70 percent of the Hispanic vote and virtually 100 percent of the black vote.

Another key demographic is the female vote and there is a question of whether Obama’s endorsement of same-sex marriage will be a turn-off from their support in 2008. At the opposite end of the issue, Obama has been a firm supporter of women’s health and reproductive rights. Just a few weeks ago, he had been viewed as a champion of women’s rights when he confronted the religious lobby over the issue of including contraception in health care coverage.

Age groups are another variation. Older people are generally opposed to gay marriage out of tradition or religious conviction. But Obama is counting on the support the young people who rallied to his cause in 2008 to be more accepting and supportive of same-sex marriage as nothing aberrational in the new social order.

Most polls show that in Maryland, and nationally, voters are about evenly split on the issue of same-sex marriage. The highest levels of support are among young people and independents, the so-called swing voters. But the one element of campaigns that polls cannot detect is the strength and depth of organization.

Trying to parse how the same-sex marriage issue will break down is like trying to make sense out of a thousand gallons of alphabet soup. The matter will no doubt settle down soon only to be revived again when—and if—the Democrats include a plank in their platform at the Charlotte, NC, convention Sept. 3-7, and then again around the November 7 election. Obama says he will not push for a platform plank at the convention. There is no doubt that Obama would have been better off without having to deal with the issue until Joe Biden nudged the Administration by declaring his personal support on Meet the Press. Washington’s latest guessing game is that Biden’s declaration was a set-up for Obama’s statement of support for gay marriage. Nobody, except Obama and Biden, really knows.

There are those who argue that Obama’s declaration was courageous and historic. He has won international praise for becoming the first U.S. president, and one of the very few heads of state, to endorse gay marriage. But on the home front, the issue almost certainly will act as an organizational catalyst for supporters and opponents of gay marriage. The key to the November election in Maryland will be the efficiency of the voter delivery system and with it, the size and emotional intensity of the voter turnout. And right now, the safest assessment of the fallout on the issue is to say let the chips fall where they may. God is usually on the side with the best get-out-the vote operation.