Wake Me Up When September Ends

Ignore the media’s hour-by-hour coverage of the presidential election. 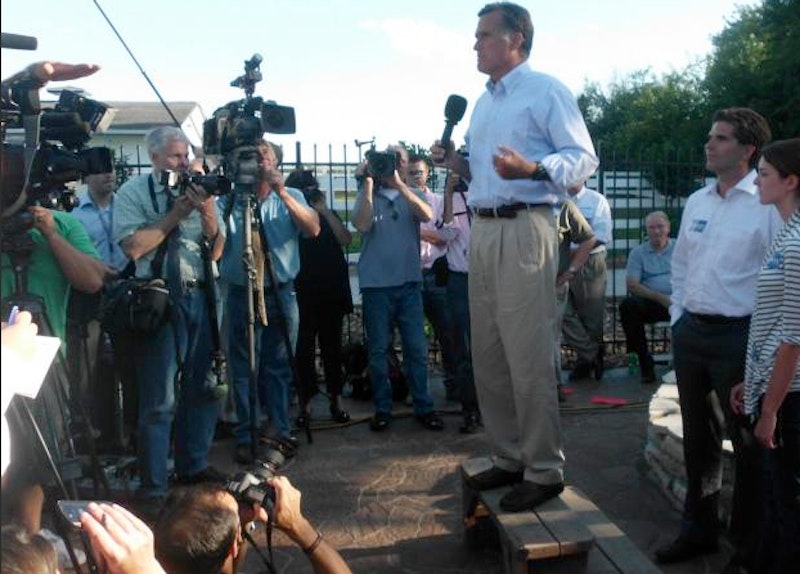 Here’s some unsolicited advice to buzzed-up Democrats and Republicans who shake, rattle and roll several times a day upon reading a poll, tweet or dashed-off blogpost about the presidential election: take a political vacation. You wouldn’t know by reading the news, both real and manufactured, but the election is still nearly six months away. I understand that devotion to political sport has accelerated in the past decade—or since, as The New York Times often reminds readers, the Supreme Court sacrificed the respect of Americans by deciding the 2000 contest in favor of George Bush—and as former cash-cow news organizations find themselves downsized and now spew out an increasing volume of inexpensive political analysis it’s almost impossible to ignore the latest “twist” in the Obama vs. Romney heavyweight bout. Still, can everyone calm down?

The latest “shock poll” on top of Matt Drudge’s website? It changes so often that the word “shock” has no real meaning. James Carville warning Democrats that they can’t take anything for granted, even though Romney—or “Mittens” as aging, insufferably cute op-ed columnists might, and do, say—is, to be charitable, one of the worst challengers to a sitting president since… well, John Kerry? It’s all very perishable, especially in May.

At least The New Yorker’s John Cassidy, an admitted Obama supporter, has a sense of humor. Writing on May 15, Cassidy began: “In my neck of artisanal, hormone-free Brooklyn, the latest CBS News/New York Times poll, which shows Mitt Scissorhands leading "The First Gay President" (funny, I thought Bill Clinton was the first gay, black, female, transgender and vegan president) by three points, landed with a nasty thud. ‘I can’t believe he might lose,’ my wife said when she spotted the offending numbers on the Web. ‘People are really willing to vote for Mitt Romney? They hate Obama so much they’d vote for Romney?’”

Cassidy parses the numbers of this recent poll (buried, as he says, on page 17 of the Times’ print edition of May 15) and concludes, “Put it all together like that and it’s enough to spoil the breakfast of anybody, myself included, who fears what another four years of Republican rule would do to this country.” And though he assures fellow Obama cheerleaders that “it’s too early to apply for Canadian citizenship,” Cassidy reminds them that there’s a possibility the Democrat could lose. Never mind the mass exodus to Europe in 2004 if Kerry didn’t unseat the hated Bush (I guess Canada is preferable now, given the weird chaos in the EU these days… I mean, years), which of course never materialized, and wonder instead if a Romney presidency would destroy the United States. Always possible, I suppose—and maybe I could be 21 again—but if the country survived the mercifully brief tenure of Jimmy Carter, the citizenry is likely to survive.

Seriously, what’s the point of getting anxious, in May, about the latest poll from a Congressional district in a battleground state like Nevada, Ohio or Virginia? Between now and Election Day it’s guaranteed that 100 twists and turns in the race will occur and so all this speculation is pointless. To sum up the obvious factors: the economy, and whether it sputters or rebounds; the always possible fatal Romney gaffe; a White House scandal; an Israel/Iran flare-up; a wave of violence at the hands of either the Occupy Wall Street crowd or a Tea Party faction; young Malia Obama suffering a broken leg; the fall debates between Obama and Romney; a terrorist attack on U.S. soil; or, say, the President caught off mic saying something like, “I’m going to destroy that Mormon fucker.”

Pundits reflexively, and condescendingly, point out that most Americans aren’t fixated on the election to the same extent as the media, and while that’s true, it’s not as true as a generation ago, before you could turn on the electronic device of choice and see nothing but election news, interspersed with the usual celebrity dirt or deification and missing white children stories.

Until Labor Day, when the election is but 60 days away, no “startling development” (of which there are about a dozen a week) will likely have the shelf life to alter the race. So, I’d say a repetition of “I read the news today, oh boy…” is in order.