Not Getting Away With It

Brett Kavanaugh, intemperate and off the chain. 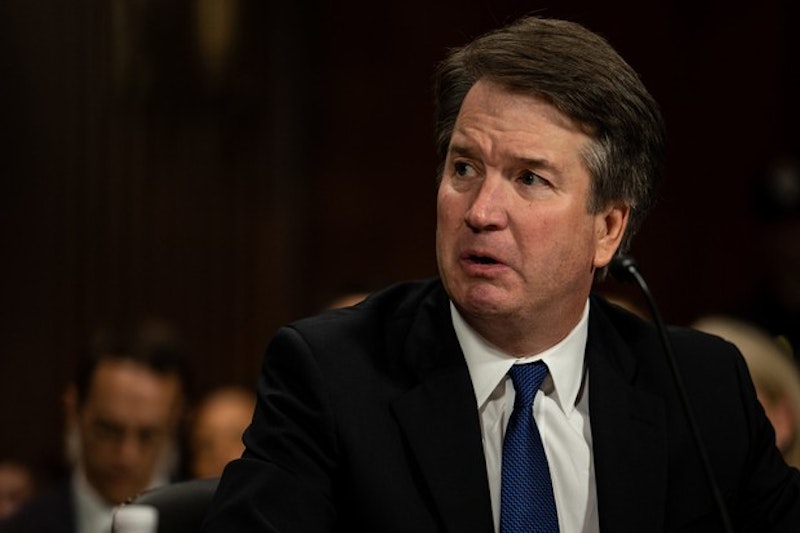 You blew it. You whiffed. You broke the vase. You failed the test. You started a fight. You filched a 20. You got suspended. You crashed the family car. You threw a wild party while home alone. You flunked out of undergrad. Your most recent performance review was butt. Authority figures noticed—and now you’re busted. You’re in trouble. Shit is fucked. So you’re scowling. You’re throwing a fit. You’re crying, maybe swearing, kicking stuff over, running away, getting wasted, crying under the covers in your room, desperately texting friends. What are you? You are shamed, chastened, humbled. You wish you’d never been born.

But you’re not 53 years old. You’re young, or old enough to know better. Brett Kavanaugh, who is 53 and would like to be the next Supreme Court justice, spent his Thursday congressional committee hearing lost in a full, belligerent fury, ranting, sighing, interrupting, flailing, and snarling. There was a stark, hallucinatory cast to these proceedings, to the sledgehammer shattering of congenial decorum, as though, somehow, Kavanaugh had managed to survive 53 years before any person or committee finally saw fit to corner him and roundly call him on his bullshit.

A performance narrowcast to a handful of politicians that was nonetheless endured by millions of American on television, it was an embarrassment unbefitting the institution—the private, drunken freakout at a private club with concerned, cigar-fondling friends instead somehow turned freakishly public, a petulant, Trumpian dissembling indicative of how far our political culture has fallen.

Sexual and perjury allegations are difficult shadows to dwell under; dinners in the Kavanaugh home these days must be tense. But to court public political life is to reap whirlwinds you never see coming, and this man has already been a D.C. Circuit Court judge for years. He must’ve known, in reaching for this rung that his personal and professional peccadillos could catch up. This life—all lives, really, visible or less so whether or not we want to admit it—demands masks. Kavanaugh didn’t bring one with him, and his anger won and poured out—attacks, counter-attacks, partisan conspiracy claims. For most viewers, this was our introduction to him.

Who did we meet on Thursday? A sneering, arrogant bully who seemed on the verge of sweeping every object off of the table where he sat, who seemed offended that the very idea of being questioned, who did not even seem to possess the poise and temperament necessary to judge an amateur micro-brew competition. This did not go unnoticed, and regardless of what happens in the coming weeks, it won’t be forgotten.