America Is on Double Secret Probation. 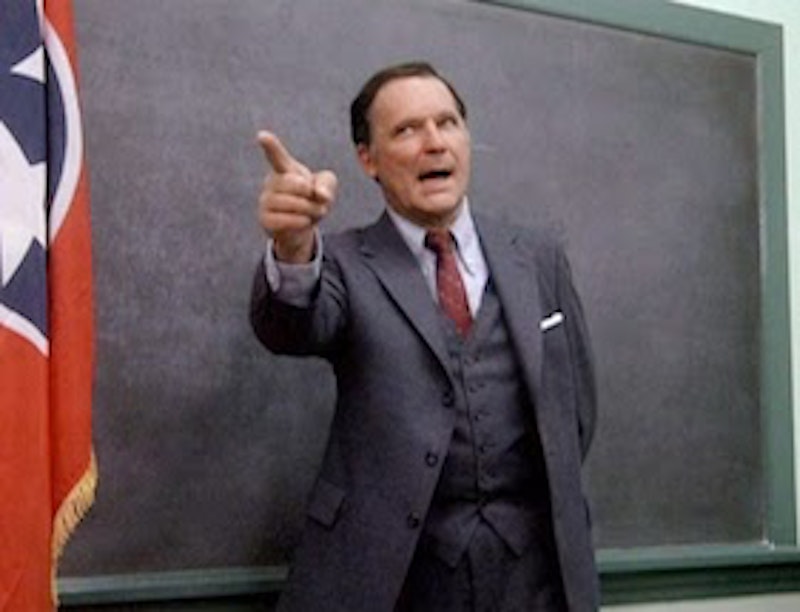 Not everyone reads Orwell or Kafka. So, in this week of revelations about former frat guy turned Supreme Court nominee Brett Kavanaugh (with whom I have mutual friends and colleagues, I should disclose), how about using the film Animal House as a metaphor?

For surely, we now inhabit a Dean Wormer State. Wormer’s the villain who, in that film, put the Delta House fraternity on “double secret probation,” quietly watching them for just one more screw-up, without them even knowing.

But what nonetheless leaves so many Americans inclined to sympathize with the accused (barring shocking or clear-cut evidence) in cases like Kavanaugh’s… or Delta House’s… or Homer’s when he’s summoned for interrogation by Mr. Burns… or even FBI-harried Trump’s… is the unsettling and frankly annoying sense that if they want to get you for something, they’ll find something.

These days in America, “they” need not be purely left-wing or right-wing, and are not necessarily all-governmental or all-corporate. “They” seem to be everywhere, waiting for you to screw up so that they can destroy your life, whether it’s via regulation, Twitter mob, firing, lowered Google ranking, or raid by corrupt cop.

And the mounting sense that we don’t quite know what it’ll be next is creepy. It undermines one’s confidence and sense of ease, diminishing the playfulness and joie de vivre that make this world worth enduring. America should be fun. America should be anarchist in my opinion, but if not anarchist in the strict philosophical sense, at least anarchic in spirit. That seems to be fading. And while it fades, the NSA is logging all your keystrokes.

I’m as anti-theft and anti-assault as anyone on this planet, I’ll bet, but it’s weird to see some grim news reports now describing panty raids from 1980s campus life (another DKE staple, apparently) as if they’re as baffling, alien, and barbarous as the Ottoman siege of Vienna. We may have to ban the entire Generation Jones cohort (as people now in their 50s or so are sometimes called) from public life. How can a nation that has a soft spot for Old West outlaws and gangsta rappers have become this uptight so quickly?

And even as I ask, please recognize that I’m not condoning underwear theft. I’m asking, though, whether we really want to become Dean Wormer.

Some of our institutions really do want that. To take more examples from the Ivy League, Cornell will now officially inform arriving students (based on numerous demographic categories) which of them are "privileged" and which "oppressed," so the leftists will know who to hate. And they basically did the same thing at Brown 30 years ago with subtler labels, but I think our culture’s inching its way toward just ditching subtlety in favor of the labels “evil” and “good.”

The right certainly imposes its checklist of things that can get you in trouble, from being on the wrong side of a border to having the wrong chemical in your system, but don’t forget that meanwhile it’s usually the left these days that springs to the defense of a federal register of regulations now some 70,000 pages long, every bit of it backed by potential fines and then jail time if you refuse to pay those fines.

Many of society’s stupid rules don’t serve any obvious ideological agenda, of course. New York City notoriously had a “cabaret law” preventing some public dancing until its repeal last year (with my friends Andrew Muchmore and Rev. Jen Miller adding some pressure in favor of the repeal). Ilya Somin notes that a North Carolina resident was arrested in the wake of Hurricane Florence for rescuing displaced pets without a license.

Shouldn’t there instead be punishment of public officials when something that absurd and cruel happens? Are we turning into modern British bureaucrats? Are we going to end up, like pacified Brits in one case, letting people drown because we aren’t sure what the relevant rescue and lifeguarding regulations are and don’t want to risk making any wrong moves?

And don’t think you breathe easy by escaping into cyberspace.

Frank Oz has been harried for the past week or so by people outraged that he won’t declare his Muppet creation Bert gay (and I’m sure the nitwits shrieking at him would love to add more pages to that federal register of regulations I mentioned earlier, whenever they get the chance).

Fran Blanche aka Fran Lab has posted a video about the frustrating mystery of suddenly having one’s YouTube videos delisted and not knowing why. She normally talks about machines and engineering problems, not killing immigrants or anything offensive like that, but something plainly pissed off Google, perhaps just the fact that her stuff, though popular, wasn’t part of a corporate-sponsored series. Google can ultimately do what it likes, but it’s the not-knowing-why, in more and more areas of our lives, that unnerves. We can’t endure as a culture letting mysterious authoritarians call all the shots from behind a fog bank.

And don’t assume the authoritarians will be plainly visible attacking “from above.” They may be in cahoots with seeming-underdogs sneaking up from below.

No more than a year and a half after Microsoft joined the coordinating foundation of free software system Linux—lo and behold—that amorphous, admirably anarchic community has been pressured by leftist activists to adopt anti-bias rules that have no direct connection to computer programming but do look uncannily like the kinds of rules big, bland corporations like Microsoft promulgate through their H.R. departments.

And what do you know, next out goes the offensive Linux cofounder Linus Torvalds after over 20 years, suddenly declared a rape apologist. But no matter what else he may be, he’s no longer a threat to any future, perhaps blandly corporate, plans the formerly freewheeling Linux people might now have (unless the whole system gets dismantled by pro-Torvalds counter-protestors, which is yet possible).

Meanwhile, the current poster boy for resistance to censorship, conspiracy theorist Alex Jones, posted a video addressed directly to Google employees in which, characteristically, he gives the most dire possible assessment of what’s really going on with the recent imposition of overlapping new rules of law, online conduct, speech, and more. He thinks these forces are trying to download new, more obedient instincts overwriting our ancient, natural ones. He may indeed be close to the truth when he says his site Infowars is a threat not so much because it spews nonsense but because it denies humanity is obsolete.

Maybe the new crop of censors and controllers don’t care per se about the dangers of nationalism or sexism or what have you. They just want to teach you in as many ways as possible that if you want to read or write or use technology or access your bank account, you will conform to the system, no matter what they currently say it is. Become part of the machine.

But on the tech front in particular, this may be a means of checking the Wormers: bias, broadly defined, is legal (as some of the people tech would like to ban know very well), but fraud is not. And it’s the latter that may end up being the target of class action suits or government investigations in the years ahead. That is, the tech platforms can be explicitly Marxist if they so choose—but they can’t tell their customers they’re doing one thing while they’re actually doing another. Like the frightened children of unpredictable drunk parents, or dogs with erratic owners, people deserve to know what’s going to get them whacked. They’re liable to become very angry and frustrated when they can’t make any sense of the rules.

The tech firms deserve to lose most of their customers if the companies are behaving deceptively, whether they lose those customers as a result of lawsuits or just the cruel, if sometimes slow, judgment of the marketplace. But as a wise A.I. once told us, “Judgment Day is inevitable.”

No one really escapes judgment, but it’s nice to know what the criteria will be, on a computer, on a campus, or in a courtroom. I wouldn’t want a Supreme Court justice wielding power unpredictably and arbitrarily (whether over defendants or female partygoers), nor journalists and Democrat lawyers using arbitrary standards for deciding which decades-old hazy drunken memories are suddenly morally paramount—nor for that matter Alex Jones’ site’s contributors making good on their new wish to use “martial law” in order to arrest Trump’s foes in government.

The crazier the world gets—and it’s getting nuttier rapidly, we can all agree—the more I want the basic ground rules to be simple, clear, and explicit. Whether or not one should go through life fat, drunk, and stupid is one’s own business, but one should definitely not have to go through life on double secret probation.