Adequacy and Excellence in Democracy 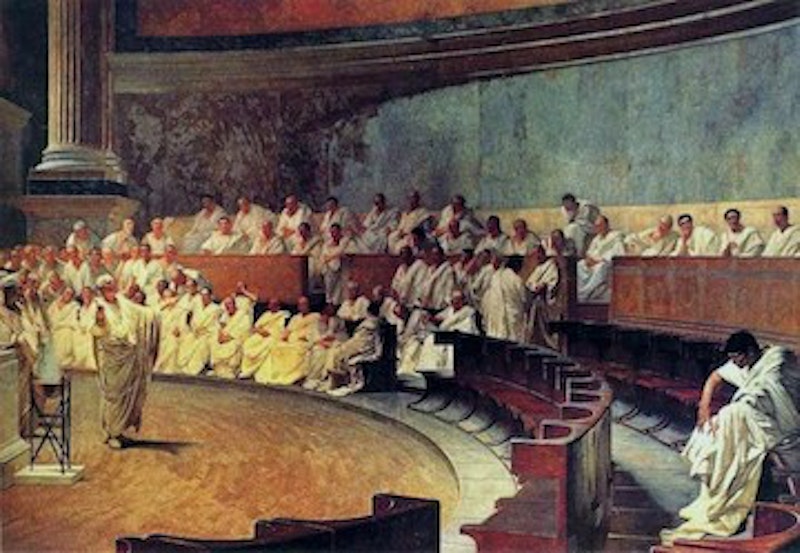 Democracy requires at least a traditional constitution, providing guidelines for the function of government. The demos must be defined and its power circumscribed and formalized. Throughout history, democracy on any scale has required definitions of citizenship by which to limit the electorate and a framework for collective decision-making.

The constitutions of democratic states lay out the path from aggregate political will to organized, state authorized action, law, etc. The variations upon the idea of democracy are myriad, and as flawed as other human institutions. Legitimate democratic institutions don’t make a state good, or even functional. They certainly don’t guarantee the political empowerment of the entire citizen body.

It’s entirely possible to employ democratic institutions in service of a power other than the sovereign People. Republican Rome used the world’s first census data to ensure that the aristocracy could determine democratic outcomes in the Centuriate Assembly before the rest of the Populus could vote.

Moreover, democracy often serves as an effective disguise for tyranny. The emperor Augustus, whose long and celebrated reign was founded upon war, intrigue, and murder, enjoyed the republican honorific princeps [inter pares], “first [among equals].” Posing as the savior of tradition, he consolidated Rome’s first hereditary monarchy in 500 years. A feeble but proud Senate murdered Caesar for the title of dictator, but Augustus maintained a virtual dictatorship for 40 years by carefully preserving the outward show of democratic and republican institutions.

Democratic government may serve as the instrument of social, economic, and political expression, but democracy offers no guide to judgment in these same matters. Democracy doesn’t form values. Democracy doesn’t contain within itself the idea of egalitarianism. The Athenians of the Fifth Century practiced slavery, denied women nearly all autonomy, and exploited the allies who’d helped them repel the “barbarians” invading out of Persia. They also practiced a purer form of democracy than any other of which I’m aware.

It doesn’t make sense to claim democratic government is essentially egalitarian, because egalitarianism and other “democratic” ideals are social values rather than structural requirements of democracy itself. Democracy as a means of political judgment may express the egalitarian attitudes of a society, but democracy does not in any way demand egalitarianism as a core principle. Egalitarian democracy is merely the democratic government of an egalitarian society. Democratic government succeeds if it effectively realizes the values of its society; it plays no direct role in the formation of those values. Still, society is a dangerous abstraction that obscures the nature of applied democracy. In theory, each citizen participating in the democratic institutions of his state will form his judgment on the basis of his own knowledge, reason, and values. Such institutions ensure the legitimate expression of the collective judgment of society. In theory.

In practice, democracy offers the People a limited and confusing menu of political options from which to choose. A few all-encompassing systems of thought not only dominate the beliefs and attitudes of most, their advocates strive to present these canons to voters as the only alternatives. Even in Athens, where all free adult men might vote to banish one citizen each year, the agenda of the democratic Assembly was determined by a coterie of insiders.

As all democratic peoples have discovered, democratic institutions express social values distorted by wealth, prestige, and the control of information. Democracy is in no way incompatible with cupidity, personal influence, faith, or fear in the value systems of the electorate; these and similar aims, assumptions, and aversions have always hindered human social systems. Democratic societies are particularly susceptible to these influences, though, as public opinion there will exert a direct affect on politics, policy, and office. As such factors express themselves ever more insistently in the operation of democratic institutions and the dysfunction of democratic government, political urgency replaces commitment to the values we citizens seek to introduce or reinforce in democratic society.

Democracy explicitly expresses not just the will of the People, but a society’s values as well. As with many individuals, the values expressed by social structure and government can be incoherent, arbitrary, and vicious. Unlike the judgment of individuals, the need to build consensus requires constant appeal to core social and personal values. As politics and government concern the intersection of state and individual, those seeking to lead in a democracy must constantly define, critique, and improve the balance of civil rights and civic responsibilities. Whether concerned with primarily social (justice, compassion, nationalism) or personal values (skepticism, prudence, greed), persuasion relies upon an appeal to guiding principles by which to steer democratic government. When politicians are driven more by ideological competition than ethical purpose, democracy sags, and eventually collapses.

Democracy offers a marketplace for values and a formal means to arbitrate, for the purposes of government, disputes regarding value-based decisions. That marketplace is dominated by a few synoptic points of view, intolerant of nuance or ideological dissent. Citizens forfeit their civic and intellectual dignity in adherence to a prescribed system of thought. Countless zealots seem to embrace every aspect of religious, scientific, or political dogma. Yet many rational, if frustrated, voters cast their lot with deeply flawed politicians and policies.

The hawkers of ideology represent themselves as principled and their ideas inspired. Voters and donors require this performance, as they believe themselves to be similarly disgusted by all the politics that goes on, and similarly concerned about the subversion of democracy.

Democratic institutions formalize the expression of a society’s values. Many of the values claimed by political leaders are prima facie attractive to those who, by their participation in the political process, consent to be governed. But this process in no way ensures, or even promises, the enshrinement of “democratic” ideals at either the constitutional or the particular level. The values expressed through a democracy are typically built upon adversarial politics rather than personal conviction.

Still, as democratic society orients itself toward certain shared values (and not the caprices of a monarch) in the function of its government, such values can be defended, criticized, and tested. Because democratic institutions reflect on a vast scale values embraced by individuals, the health of a democratic society demands individual excellence as a civic paradigm.

As elected officials today stand at the forefront of political movements that’ve coalesced around a few professed values, both personal conduct and political behavior disclose the habitual betrayal of those values by our leaders and the moral bankruptcy of the parties that support and control them.

Against this background of complacent, unremorseful corruption, the demagogue presents himself as a torchbearer of traditional values trodden by the political establishment. The demagogue explicitly represents those ideals publically flouted by party politicians. In the promises of the demagogue, voters hear a commitment to standards they recognize.  Disgust at the status quo leads voters to embrace contemptible candidates, as citizens hope that personal shortcomings will inevitably yield to higher principles. Yet though dangerous politicians may ride a wave of populism to high office, their hollow promises and lack of principle will out. The cost of such discovery may imperil the foundations of democratic society itself.

Excellence can’t be defined or imposed by democratic government. The politics of democracy can reward excellence, but typically the opposite occurs. At this moment in American history, the forces warping our democracy seem insurmountable. The idea that men and women of principle might somehow dislodge the liars, cheats, and thugs from the halls of government seems naïve.

Is excellence then an invalid model of democratic leadership? Obviously not. Both party politicians and political outsiders rely upon claims of moral insight and value-based policies to persuade the electorate. Indeed, democratic politicians inevitably present a model of excellence, though they nearly always fail to fulfill it. However, the lack of decent leaders does not preclude civic excellence itself.

Excellence is both what politicians offer and what voters demand. When commitment to prescribed ideology and, worse, tribal loyalties replace our willingness and ability to judge institutions and individuals for ourselves, we invite political stagnation. That unhealthy equilibrium is punctuated by turmoil as the devaluation of core principles drives demoralized citizens into the arms of unscrupulous opportunists.

How, then, to transmit the values implicit in the excellence of truly outstanding individuals? The achievement of excellence requires great sacrifice, both at the individual and collective level.  Communicating the need for that sacrifice is a rare gift. A democratic constitution is adequate if it provides scope for the deliberate practice of excellence. Excellence itself belongs to the individual who deliberately and consistently embodies the values by which he lives and leads. The survival of our democratic traditions, the circumspection of our government, and the vitality of our civil society require leaders worthy of our principles and convictions.