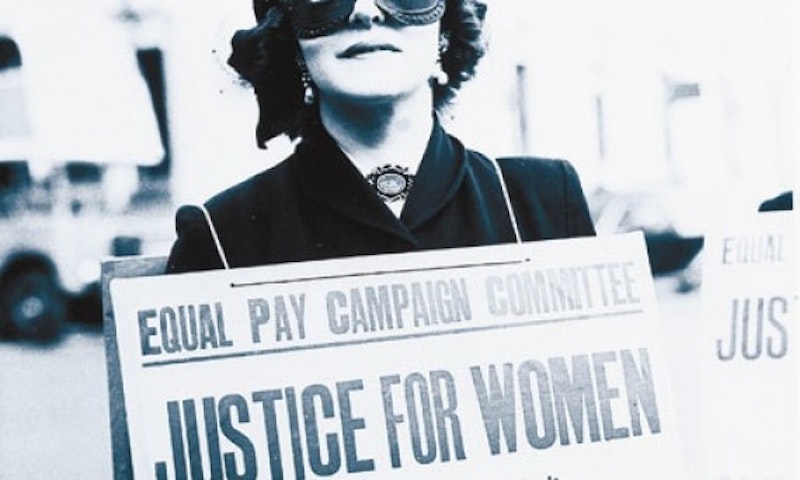 Feminists are the devil. They're lying dangerous Nazis, and also somehow cowardly wimps who should be sneered at for their weakness. They’re impervious to logic or reason, and you can tell sexism is dead because accusing women of being impervious to logic and reason has nothing at all to do with discriminatory stereotypes of women. How do you like that swaggering male rational reason now, huh, feminazi trash?

Semi-deranged anti-feminism has become a hallmark of online discourse, and Chris Beck does his part to fuel the silliness with his foam-flecked rant from earlier this week here at Splice Today. It's a shame, too, because Beck's central point is worth talking about, sans partisan flailing.

Many Democratic politicians, including Bernie Sanders and Hillary Clinton, have claimed that women make 77 cents for every dollar that men make. This is used to argue that women are paid less for the same work as men—but, as Beck says, this is extremely misleading. The 77- (or 78- or 79-) cent figure is obtained by looking at the difference between the median woman's earnings and the median man's earnings.

This differential is affected by a number of factors other than straightforward discrimination. The first of these is that men and women tend to be concentrated in different occupations. Beck argues that there are more male CEOs, which is true. But then he says that men are more represented in lower wage jobs… and that's false. In fact, women are disproportionately represented in the lowest wage jobs, such as home health care, childcare, fast food, maids, and cashiers. Women overall make up two-thirds of those in low wage jobs, and this doesn’t seem to be related to education, marital, or parental status. Qualified women get lower paying jobs than qualified men—which suggests that sexism is a factor in which jobs women get, and perhaps in the pay accorded to jobs in sectors dominated by women.

Women also make less because they're more likely than men to take time out of the workforce to raise children. To some degree, this is a choice; sometimes women prefer to raise kids rather than pursue a career. But it can also be a forced decision. As Jessica Grose points out, having a child is physically exhausting and requires a period of recovery. When jobs don't provide maternity leave, women have to go on leave without pay, which means they're the primary caretaker at the beginning, and so there's a powerful incentive to just stay out of the workforce. This is especially the case in the United States, where there's little affordable childcare, and where many woman may not be able to make enough to afford having someone else watch their child.

Finally, there’s evidence that there’s some direct wage discrimination against women—totaling perhaps eight cents on the dollar. That's not 20 cents, but it's significant, and suggests that sexism does lower women's pay when they take the same jobs as men, despite Beck's claims to the contrary.

Beck argues that women's focus on pay disparities obscures that the real discrimination is against men; he cites high male suicide rates, high incarceration rates, and men's concentration in dangerous jobs. But putting men and women in opposition like this doesn't help anybody. How does it benefit men with depression to live in a society where by default they’re supposed to work and work and work, while women get booted out of the workforce with less opportunity to make a living? Men are shunted into dangerous but higher paying jobs where no one cares if they get injured; women are shunted into lower paying jobs where they can't make a living. These are complementary oppressions, which need to be addressed through better workplace safety regulations, broader family leave policies, better childcare options, and vigorous prosecution of gender discrimination.

Beck claims that the "77-cent" figure is "a distortion of reality designed to support an ideology." But his own argument, dripping with snarling accusations of bad faith and half-digested talking points, is thoroughly ideological, and is probably more misleading than the claim he insists he's refuting. Women continue to face discrimination in the workforce. Coercive, restrictive gender roles continue to harm both men and women, on and off the job. It's true that misleading statistics won't help solve these problems. But neither will demonizing feminists.