"We once said, ‘Yes We Can’, and now it's time to say, ‘Yes They Can’. The truth is, putting your infants to work will not only make you money, it will save money by eliminating the need for maternity leave, daycare costs, school tuition and other previous necessities no longer needed under The Crybaby Initiative." 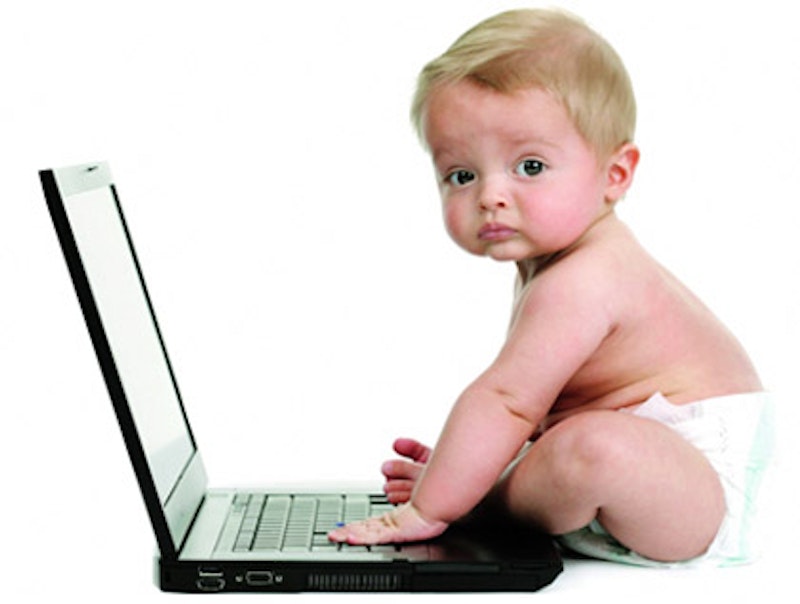 WASHINGTON, DC—President Barack Obama shocked the nation yesterday by revealing The Crybaby Initiative: a fail-proof plan to restore the manufacturing industry in America. As detailed in a statement given to Congressional leaders, Obama promised his initiative will create one million new jobs by the end of 2012.

In the midst of his plunging approval rating, this triumphant feat by the President secures a commitment with our most powerful industries, which are already in the process of abandoning China as home base and returning to America. In exchange, these financial giants have been granted immunity, enabling them to dismiss paying minimum wage and skip health coverage requirements for their new employee roster of untapped labor—American children. This impending jump-start to the economy, beginning October 27, allows kids as young as eight months old to join the work force. Currently this opportunity is by choice and is not projected to become a labor mandate until 2013.

Beyond its obvious benefits in strengthening family values, the initiative keeps money in the pockets of our job creators, in addition to increasing government revenue (once the million children begin paying state and federal income taxes).

Despite an absence of racial implications in The Crybaby Initiative, once news reached the African-American community, panic spread. The Rev. Al Sharpton sprung into action, setting up an impromptu press conference. When no one attended, Sharpton angrily faxed the following statement to CNN: “The white half of Obama doesn’t care about black people. Our community knows this Crybaby Initiative is just the white man’s ploy to set the clock back on slavery.” After CNN declined to air his statement, Sharpton took to the streets with a bullhorn and shouted at random passersby, “CNN is racist!”

On another cable network, MSNBC’s Chris Matthews reported that Obama’s new pact will be green-lit after instituting a ban on Franklin D. Roosevelt’s Fair Labor Standards Act, as well as a complete reversal of Child Labor Laws—both of which the President claimed as the leading cause in crippling our economy.

It’s said that Republicans unanimously supports Obama’s plan, but when pressed for quotes, they had nothing good to say about the black president. However, speaking on behalf of conservatives, presidential candidate Rick Perry stated, “I celebrate The Crybaby Initiative as the perfect turning point in our history. It offers every infant a head start on achieving the American dream. Similar to what I did for Texas.”

Later, coerced by his political base, Perry recanted, “To me, Obama’s war on babies is a desperate attempt to placate liberals!” The most encouraging message came from House Minority Leader, Nancy Pelosi, who was quick to praise the president’s bold move, “Impeachment is off the table. Food is on the table.”

Back in Washington, news organizations flooded Obama's press conference in which the President urged our country's mothers and fathers to stop whining and not fight his decision, but embrace it on behalf of the nation's better interest. His speech was delivered with unmistakable self-confidence, reminding the world of the man he used to be before getting elected. He pressed on with command, "We once said, ‘Yes We Can’, and now it's time to say, ‘Yes They Can’. The truth is, putting your infants to work will not only make you money, it will save money by eliminating the need for maternity leave, daycare costs, school tuition and other previous necessities no longer needed under The Crybaby Initiative."

Before the press conference, Obama said he wouldn't be accepting questions from the media. Nonetheless, he did make eye contact with each of the 159 cameras present just moments before delivering the inspirational words certain to bring back hope in America, "Ask not what you can do for your children—ask what your children can do for you." The press burst into applause.

Immediately after the conference, Fox’s Bill O'Reilly made an on-air call to a former United States president—who requested his name be kept anonymous. He told O’Reilly, "Me and Cheney had the same idea as this Obama fella, but the search for WMDs got in the way."

Meanwhile on the other side of the world, Hu Jintao, Leader for the People's Republic of China, was not fazed by Obama's decision. Recently leaked records show that at the time of creating The Crybaby Initiative, Obama assured Jintao he would simultaneously lift all visa requirements on Chinese immigrants under the age of 12. This ruling makes it possible for thousands of freshly unemployed Chinese children to relocate to any of the nation’s 50 states. Therefore, the already skilled batch of Chinese youths will continue competing with American citizens in order to regain their former jobs. Jintao stated he has every confidence that China will come out ahead.