Too Good to Last

The medical marijuana industry might not be around much longer in it's current form, thanks to federal intervention and the power of the almighty dollar. 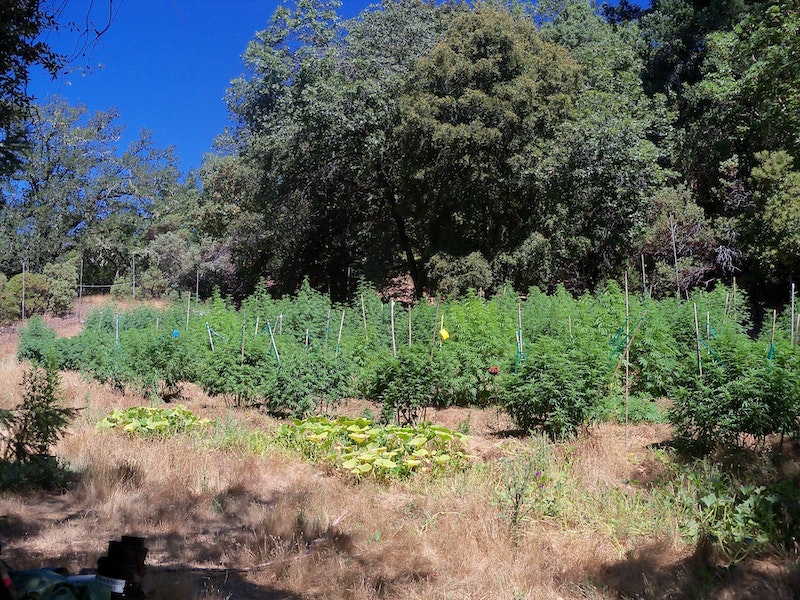 It’s been 15 years since medical marijuana was legalized in California, and the multi-billion dollar industry is still mired in the same murky legal gray areas that have plagued it since its inception. Despite Obama’s promise to end the war on drugs, the DEA has resumed its raids (that never stopped entirely) with no end in sight. Talking with close friends in the industry, paranoia is nearly as high as ever, even at a farm that does everything by the books.

It doesn’t help that every year the rules change. Even Mendocino County, the pot-growing capitol of the world, can’t seem to figure out a consistent regulatory system. The operation I’m familiar with has always used 100 plants as a semi-official maximum, and this year, for the first time, all 66 were registered by the county for $50 apiece, plus a $1600 inspection fee—for protection that means nothing in the eyes of the feds, and may make the farm even more of a target. Along with numbered zip ties, the inspectors place a banner in the field for the many surveillance planes to see—it’s a well-known fact amongst growers that the government is aware of every garden in Northern California. The assumption at this farm is that with only 66 plants and no obvious assets to seize (new trucks, cash, guns), it’s just not worth their time and money to come take everything down. Even if they did, the charges would almost definitely be dropped: all the workers have their doctor’s notes and the owners keep a lawyer on retainer.

Even a modest operation like this one is extremely profitable. The owners of the property clear well into six figures from the summer growing season, even after paying the mortgage, three fulltime employees and at least a dozen seasonal workers. The property itself has benefitted immensely, there’s a thriving vegetable garden, a newly built chicken coop and a scattered host of projects. Even with the price of marijuana steadily falling, the lifestyle is still very much hedonistic. The nicest structure on the property is the bathhouse, with its sauna and wooden hot tub imported from Thailand. During harvest, there’s a full time chef and a masseuse made available to the workers, whose “job” is to trim (manicure) the pot, have a good time, and make up to $500 a day. There’s a waterfall and wild ponies roam the golden hills. Needless to say, there is no shortage of willing applicants.

There’s the fear that this way of life might be possible much longer, and that the industry that supports a lot of people I know will come crashing down in an instant, taking jobs and the local economy with it. It’s my opinion that marijuana would already be legal if California had figured out a way to regulate it without the bubble bursting and prices collapsing. Weed is easy to grow (easier than tomatoes), but by placing enough restrictions and some risk on growing it, prices have remained high, as has demand. Old mining towns have been revitalized as an effect of the “green rush,” and cash from all over the country flows into California and typically stays here. Most people I’ve talked with don’t want pot legalized, but think that by already having the infrastructure in place the farm would survive even if California opened the market up, taxed farmers heavily and prices fell.

The end of the road, worst-case scenario would be federal intervention on the way to legalization—handing the multi-billion dollar to the pharmaceutical industry, taking the profits out of the hands of countless small businesses and straight to a few corporations. You can speculate all day long about the evils of big business, why pot is illegal in the first place (surely that has nothing to do with how many legal drugs would become obsolete if marijuana was made widely available) and our current economic situation, but it’s not too far-fetched to envision an Obama re-election job plan based around “legitimizing” the medical marijuana industry. Public opinion is on the side of medical marijuana, but I get the sense the general public wouldn’t feel too bad about the government taking pot out of the hands of the growers, often (fairly or not) portrayed as hippies or gangsters and putting it into the hands of doctors and pharmaceutical companies. It would appear to create thousands of jobs, even if it destroyed the lives of many currently living off their land, or relying on the seasonal work. The thought of Monsanto herb or Marlboro Greens makes me shudder, but history suggests that dollar signs are the bottom line, and the rich will most likely get richer at the expense of those on the bottom of the food chain.

This place is a paradise, but the lifestyle is most likely a mirage. It’s too good to be true, too good to last and when it’s gone, it’s not coming back.