And class warfare doesn't mean what they think it does either. 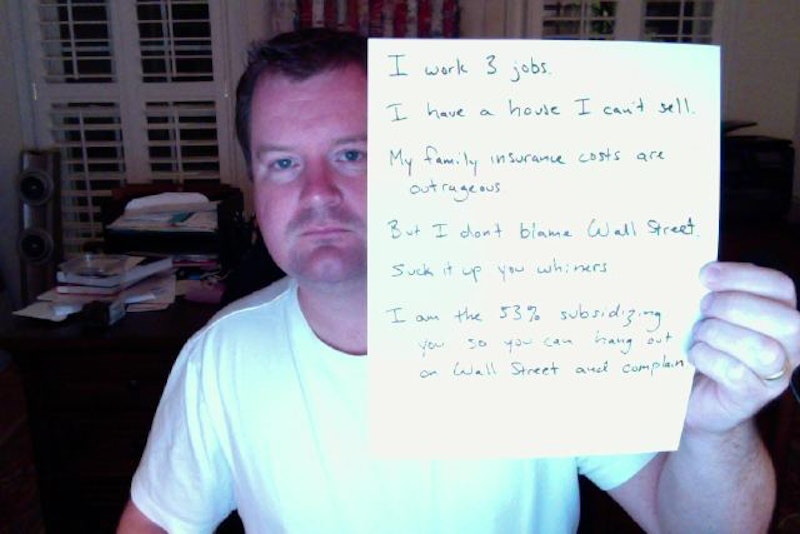 You see, Erickson, et al, think that these damn hippies just need to “get a job”—as if the massive lack thereof isn’t described in every newscast and newspaper and Internet post since 2008. But no matter—Erikson et al are the self-styled intellectuals of a movement that aims to keep the government’s hands out of their Medicare, so, yeah.

One of their favorite talking points is that a big number of Americans don’t pay income taxes, as if no other tax exists (payroll, state, local, sales…), and as if this isn’t the result of Republican presidents and Congresses cutting taxes left and right. The amount of cognitive dissonance (or epistemic closure, or aggressive dumbness—call it what you will) is staggering, as it has always been.

So, who are Erikson’s 53%. Not surprisingly, they are mostly people who are indeed part of the 99% they so disdain. Like this dude:

Yes, good sir, having the military (a government institution that is massively expensive) will pay for you to go to college. A government that, like, peoples’ tax dollars pay for, yeah. Or:

Your father is a cop, and…

Okay, it’s easy to get lost in this blog, Actually You’re the 47 Percent, because it highlights just how shockingly ignorant the public can be when it comes to understanding the role government plays in their lives.

Time for a little hard data from the Congressional Budget Office:

Carter, Reagan, H.W., Clinton, Bush—this doesn’t even have to be a partisan talking point! As soon as you ask a Tea Partier (candidate, official, or fanboy) what exactly he or she would like to cut, or what exactly needs to be done, you simply won’t hear anything close to eliminating entitlements. The width and breadth of the American public, save for the rich-enough who will send their children to private schools no matter where the S&P is at, is in favor of a social safety net. And while we’re at it, a resounding majority of Americans are in favor of taxing the shit out of the rich, according to a WashPost/Bloomberg poll: 68 percent of all voters and 54 percent of Republican and Republican-leaning voters favored raising taxes on incomes above $250,000 to tackle the deficit.

The people with the most money ultimately have a larger say in the role and use of government than the people with less money. This is not complicated. Couple that with the fact that, over and over again, we see how the general public simply does not understand the role of government in their lives, and what you have is a Republican Party pandering to a majority of Americans that doesn’t exist, yet works in practice.

The genius of the conservative rhetorical move here is that most people think of the taxes that you pay when you “do your taxes” in April as being your income taxes. It is, in fact, a consolidated income tax and payroll tax. Thanks to some temporary tax cuts implemented during the recession, a very large share of American workers currently have only payroll tax liability rather than income tax liability. So through sleight of hand, you can convince many more than 53 percent of the people that they are part of the put-upon “53 percent” forced to bear the burden of a nation of slackers. It’s clever. But don’t fall for it, and don’t let your friends and family fall for it either.

So, the conservative riposte via new media is a clunker, and it reminds me of a similarly idiotic initiative, What the Heck Have Conservatives Done So Far, a conservative response to the popular WTF Has Obama Done So Far site. Posted on Splice by founder Nick Fisher, it was based on the reality that:

More than two decades after the invention of the web, conservatives still have no control over new media. Liberals continue to dominate this medium, constantly publishing new campaigns that mask any attempt of movement from the Right.

The site dogmatically regurgitates talking points from the Heritage Foundation, and can’t get enough of President Reagan’s massive tax cuts that spurred 92 straight months of —wait, what’s that? The recent Republican debate on the economy kicked off with a video of Reagan declaring that taxes would go up? Yeah. Reagan raised taxes when taxes accounted for 33 percent of GDP. Now taxes account for 30 percent of GDP. And yet somehow returning tax rates to the Clinton Era is considered CLASS WARFARE. Conservatives, I don’t think that phrase means what you think it means.

And I don’t think you really understand that social media is the sphere of the young and nihilistic and sarcastic—a demographic you neither care for nor need to win elections.