Everyone Knows We Got Screwed 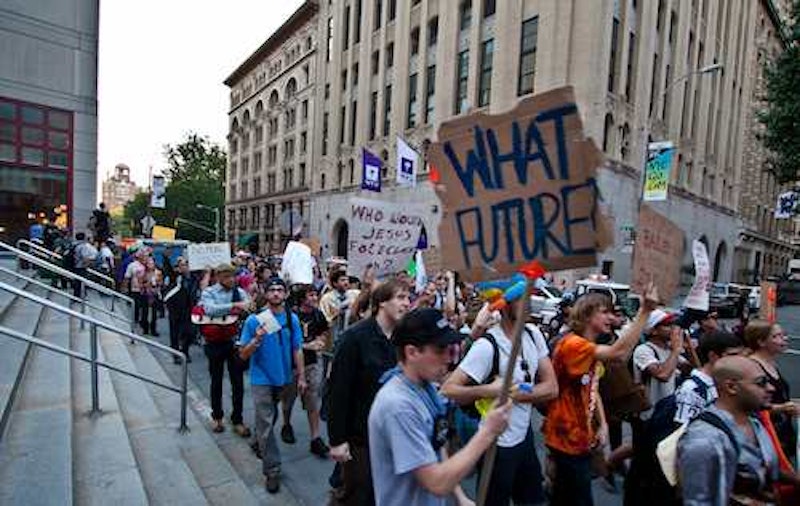 What is the first rule when somebody shafts you and treats you like dirt? Answer: Don’t act like it doesn’t matter. People say Occupy Wall Street needs an agenda, but the above item seems to be firmly in place. Whatever causes you place on top of it, this bedrock motivation is still there. Executives at banks and financial firms destroyed billions of dollars of our money and got bailed out. You know what would be good? Go somewhere and shake your fist, and by somewhere I mean as close to Wall Street as possible. The financial racket deserves shame, years of it, and we’re just starting the down payment.

The Wall Street Journal’s Peggy Noonan recently bounced her iridescent bubble of a mind against the question of political narratives and their origins. She concluded that a given political narrative takes hold because people notice what’s going on around them and talk about it. Her reasoning was that everybody liked Reagan and she likes Reagan, so therefore… In fact, she says, a leader who even talks about the need for finding a story to present to the people must be a loser and deluded. A real leader would be out there doing until the facts fell into line and the folks had something to celebrate.

Thus, Noonan implies, Obama must have spent three years playing about in fantasyland rather than taking action about the financial crisis. Her evidence is that he’s quoted in Ron Suskind’s Confidence Men as saying he could have used “a clean story” to tell about the finance mess. Of course, he says he needed the story so he could explain the policies he followed—that is, the actions he took in regard to the crisis. Noonan often falls into logical difficulties of this sort, but luckily she mistakes them for conclusions and then files her column.

Somebody else, somebody with less glow to the brain, might wonder what the President meant by a clean story, or more fully “a clean story that we wanted to tell.” Obama goes on to say that, like Jimmy Carter and Bill Clinton, he suffers from being a policy wonk. But it’s not like the administration’s crisis response was too dry and complicated to understand, or no more than any policy that addresses finance. The problem, Obama admits, was that “What was required to save the economy might not always match up with what would make for a good story.” And it sure didn’t, not unless you like this story: The administration scrambled so fast to save the financial system that the people who screwed it up had to go un–bitch slapped. Preventing the apocalypse required a no-fuss, no-muss approach, and uprooting the people who man our financial system would count as fuss, quite a major fuss that would jeopardize the attempt to keep the system patched together. So the bastards got away with it.

That’s the story Obama can’t tell, and therefore he has nothing to say. Occupy Wall Street has its own story, namely that the bastards in question are the same people whose money elects our politicians, both the politicians who loosened our financial rules and the ones who let the bastards off the hook. Obama’s unspoken story and the protesters’ alternative have the same basic theme: The bastards ran us over in a fast car and got off with a traffic ticket. Obama can’t talk about what a shitty thing that is; the protesters can, and they are. Somebody has to. Peggy Noonan is welcome to try, but I don’t think she’ll get around to it.