The Occupy Wall Street movement resembles 1960's anti-war protests, and Obama might be able to capitalize on the disenchanted, organized youth during his bid for re-election. 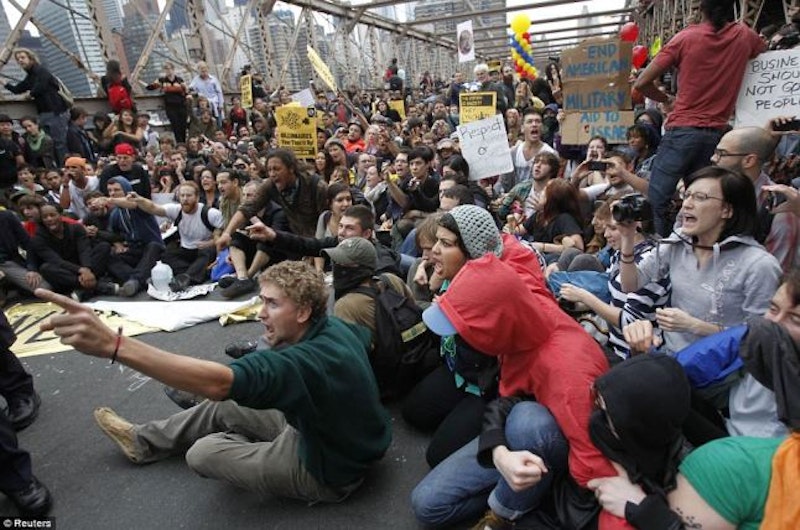 Finally, there’s enough bottled up anger and outrage to drive people to the streets to put on a heady display of send-‘em-a-message politics. Students of human motivation are suggesting that the Occupy Wall Street protest has its origins in the “Arab Spring” that has roiled the Arab world and so far has dispatched two dictators. But those among us old enough to remember see a link to the America of the 1960s when youthful rag-tag forces, such as the Wall Street protesters in many major cities, eventually merged into a movement against authority that brought about massive civil rights advances, drove a president from office and ended an illicit war. The unifying theme then was to end the draft and the Vietnam War. Today’s young protesters are still searching for common cause and they will eventually find the broad metaphor—greed and corruption seems to resonate —to unite their presence across the map. The kids need a manifesto to match their determination. The Occupy Wall Street movement is really the 1960s plugged into the social media and all the other dizzying electronic gadgetry that were non-existent 50 years ago.

Most great social change begins on the streets and not in the power centers of Washington or in the boardrooms of America. Occupy Wall Street is beginning much in the same way the Tea Party movement evolved two years ago before it was subsumed by moneyed interests. And the Wall Street protesters also owe a debt to the “Kiddie Crusade” that propelled the presidential campaign of Sen. Eugene McCarthy and forced Lyndon Johnson to abandon the White House in 1968. Isolated groups sprang up in unlikely corners of the nation with no special goals or national leader, united only by their common anger at the Washington establishment. In its purest form, the Tea Party, before it was corrupted by the likes of Dick Armey and other special interest lobbyists, and Occupy Wall Street share a similar anti-establishment interest. And there is already speculation that the two groups could eventually come together around the unifying principle to resuscitate the street scenes of the 1960s, young and old reconciling, however briefly and uncomfortably, for a common goal. The difference between then and now—so far, at least—is that the 60s produced an era of violence and bomb-throwing, i.e., the Weathermen, the Symbionese Liberation Army, the Black Panthers, and even the police. But the New York police are beginning to resemble the Chicago cops who bludgeoned youthful demonstrators during the 1968 Democratic National Convention.

Last week there was also a national call for students to cut classes and flood the streets in a show of might and solidarity. And now community organizations and labor unions—teachers, nurses and transit workers—have joined the protest in a show of strength against Wall Street. Assemble them all, the college students protesting Wall Street, the Tea Party and labor unions, and that’s a pretty representative cross-section of America. Zucotti Park, two blocks from Wall Street, where the young protesters are encamped, could become the MacArthur Park (Los Angeles) and the Grant Park (Chicago) of 2011.

For the young and the old there is plenty to protest. And the protesters bivouacking in New York have been praised by Democratic members of Congress and have evoked the empathy of Federal Reserve Chairman Ben Bernacke, who told a Congressional committee that “I don’t blame them.” Bernacke cited the high unemployment rate (9.1 percent), the low economic growth rate (1.3 percent), the college loan debt burden among recent graduates and the percentage of unemployment among recent college graduates, the highest unemployed group in the nation. What appears to animate the demonstrators is a compendium of grievances and frustrations with no single item yet formed into a bumper sticker or a chant. But there’s no question that Wall Street has become the target and the symbol for America’s economic ills as well as the cause of near financial collapse—the fall of Lehman Brothers, the greed and chicanery of the kleptocrats at Goldman Sachs and the too big to fail behemoth, AIG. The Obama Administration provided the bailout funds but Wall Street and the big banks either sat on them or lined their pockets. Not a single Wall Street executive has been prosecuted for causing near global collapse by bundling and peddling worthless paper (derivatives.) The financial industry needs more regulation, not less.

The excesses at the top of the money pyramid appear especially offensive to the demonstrators. Recent data shows a heavy concentration of wealth by the few, a very few, with the top one percent of the population controlling more wealth that the bottom 50 percent. In fact, the lower half of the population has actually lost income over the past two years. Much of the nation’s wealth is controlled by a handful of industries such as health care, financial institutions and petroleum conglomerates that are sitting on trillions of dollars in profits but are not hiring or investing their wealth in productive ways. Much of the accumulation of wealth at the top is directly proportional to the decline in organized labor whose major function has always been to help assure a balanced distribution of corporate wealth to workers and thereby keep money in motion in a productive economy.

The demonstrations on the streets come at a time when President Obama has begun displaying an assertive new brand of populism, taking the fight for his jobs bill head-on directly to Congress. “If Congress does something, then I can’t run against a do-nothing Congress,” Obama said at a news conference. “If Congress does nothing, then it’s not a matter of me running against them. I think the America people will run them out of town, because they are frustrated, and they know we need to do something big and something bold.” New polls show the approval rating for Congress is at an all-time low of 14 percent, 30 points below Obama’s 44 percent rating.

The trick for Obama is to tap into the anger on the streets turn it into disenchantment with Congress and the Republican-controlled House. And the big question is whether he can harness the energy of the demonstrators and convert it into a work-force for his reelection. The young people demonstrating are Obama’s natural constituency, the very same age group that helped to energize his campaign and win the White House in 2008. If they are not as angry at him as they appear to be with the rest of the establishment—political, cultural and business—they might be persuaded to repeat their performance of three years ago. If he fails to win them over as ardent supporters, and to make their crusade for reform his very own battle-cry, his troubles run deeper than mere poll numbers suggest. Populism is on the march.