The Times columnist exploits the urban protests to promote his own agenda. 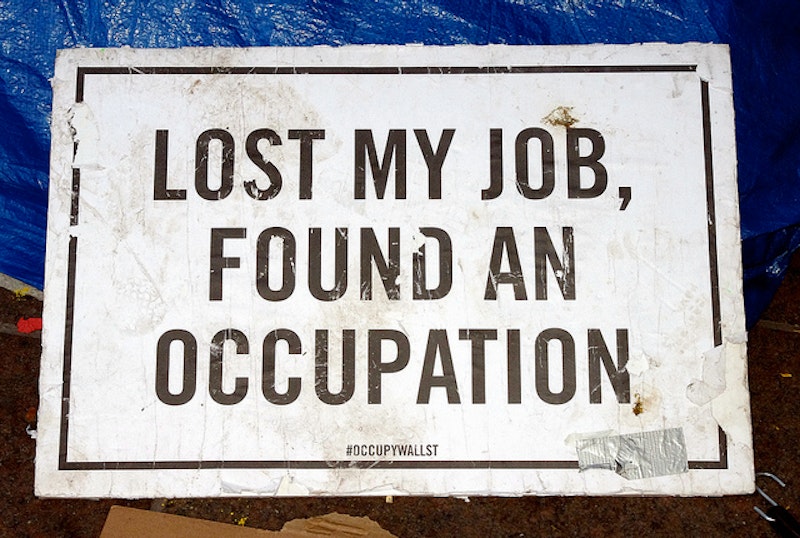 New York Times op-ed columnist/professional scold Paul Krugman is a like a kid on spring break right now, deliriously giddy that the growing “Occupy Wall Street” protests are, at least in his paranoid mind, validating his years of railing against politicians—mostly Republicans—who are in favor of tax cuts and reducing the unsustainable entitlement programs that will go belly up before he mercifully retires. It’s annoying enough that Krugman begins his Oct. 7 column “Confronting the Malefactors” with an unattributed rip of Buffalo Springfield’s “For What It’s Worth,” a song Stephen Stills wrote in December of 1966 after the club Pandora’s Box was closed down on Sunset Blvd. in West Hollywood. (Krugman’s a Boomer, 58, although I’d bet $100 he didn’t listen to the song when it became a minor hit in the first months of 1967.)

He begins: “There’s something happening here. What it is ain’t exactly clear, but we may, at long last, be seeing the rise of a popular movement that, unlike the Tea Party, is angry at the right people.” First, strip away the median age of the OWS contingent and the Tea Partiers, allow for personal cultural differences, and you’d know—but Krugman won’t acknowledge—that many of their goals are the same.

Both groups, however they express it, are angry about the prolonged recession, angry about high unemployment, angry that economically, America’s in a pickle. Who are “right people” to be angry at? Krugman says it’s the “bankers,” specifically the legal con men who gamed the markets to enrich themselves. I think both the current protesters and Tea Party adherents are angry at the same people, not only “bankers,” but politicians of both parties who don’t have the guts to buck their financial sugar daddies. And that includes the Billion Dollar Campaign Man, President Obama, as well as the sorry hack known as John Boehner, House Majority Leader.

Krugman continues: “A weary cynicism, a belief that justice will never get served [to the bankers], has taken over much of our political debate—and, yes, I myself have sometimes succumbed.” No, say it isn’t true, Professor Krugman? Times readers had no idea until this column that you’ve masqueraded as Howard Beale from Network since 2001 (not long, by the way, of accepting a speaking fee from the now-defunct Enron). I’ll offer no defense of the “bankers” (throughout the country, not just in Manhattan) who took advantage of gullible Americans by offering, at least in the housing catastrophe, shady mortgages that were too good to be true. But what exactly is the “justice” Madame Defarge, I mean, Krugman, want meted out? Firing squad at dawn, and no final cigarette? And will Larry Summers and Bill Clinton, for example, be lined up for execution?

Krugman allows that he’s not “offended” that “some of the protesters are oddly dressed [and] have silly-sounding slogans. How patronizing… I mean, charitable. Furthermore, he says, “[E]xperience has made it painfully clear that men in suits not only don’t have any monopoly on wisdom, they have very little wisdom to offer.” I wouldn’t go that far, except to note that the photo of Krugman that appears at the top of his column shows him in a tie and jacket, and that when the proprietors of his newspaper, the liberal New York Times, meets in their boardroom, there are more “suits” in evidence than jogging attire.

He also takes a swipe at GOP presidential hopeful Mitt Romney—which is fine by me, since if he gets elected there’s certainly no guarantee he’ll handle the ongoing economic crisis any better than Obama—on the issue of taxes. He claims, “[Romney] probably pays less of his income in taxes than many middle-class Americans,” which may or may not be true. But I’ll hazard a guess that Romney, whose finances are under scrutiny because he’s a political candidate, is more open than… Krugman, a wealthy man who owns three dwellings and can afford a top accountant to take advantage of loopholes in the far-too-complicated IRS tax code. Another reason, in my opinion, to institute a flat tax, with no loopholes.

Krugman’s fanciful conclusion is that Occupy Wall Street has given Obama the chance for a “do-over,” by adopting many of the changes that the protesters are demanding. Yes, I’m sure that Treasury Secretary Tim Geithner, not to mention all of Obama’s financial backers, a great number of whom are “bankers,” will be on board for that. What Krugman refuses to acknowledge is that the OWS protesters are bipartisan in their disdain for politics and business as usual, and just as distrustful of Beltway Republicans and Democrats. Paraphrasing the Great Professor/Pundit, if the protests result in a vibrant third political party, Occupy Wall Street will have been a smashing success.