The Wisdom of Spiro Agnew

They said he was stupid, and yet... 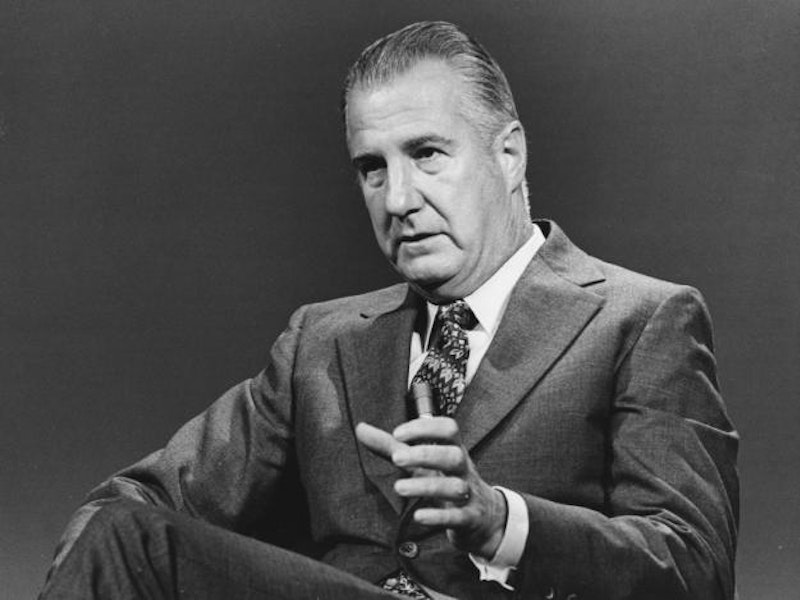 I was reading this on the bus: “'The ability to be happy is directly proportional to the ability to suffer,' Agnew said. His tone indicated he might doze before finishing the sentence, 'and as you grow older, you feel everything less.'” The book is by Joe McGinniss, The Selling of the President 1968. The “Agnew” who's speaking is Spiro Agnew, who was vice president while Nixon bombed Vietnam and did big diplomatic things with Russia and China. The quote is from an interview Agnew gave when he and Nixon were candidates, just before they got in. Reading that quote, I had to wonder. I was presented with a puzzle.

Agnew was considered about the dumbest man in American politics. For him, being an empty suit would represent a step up; he was a suit filled by a lummox. Liberals told themselves that Richard Nixon and Lyndon Johnson were chumps, Rotarian dopes with no class. Little did they know that Nixon and Johnson weren't dopes, and that this makes a huge difference. But Agnew gave them the complete package. “Once you've seen one slum, you've seen them all,” Agnew told reporters during the campaign. He became a punchline and stayed one. When he was vice president, he kept beaning people with golf balls that he misfired.

His job under Nixon was just to read speeches. President Nixon and his men would want to fire a shot across one bow or another, so they (mainly William Safire) would type something up and send Agnew to a public dinner. “Nattering nabobs of negativism,” he would read from the dais. He also read phrases like “pusillanimous pussyfooters” and “hopeless, hysterical hypochondriacs of history.” When he did, a message had been sent, pretty much one of yaa boo to you media types and you professors. Agnew was the administration's plastic noisemaker, something they waved in the air.

He got canned for taking kickbacks. Stuff that he'd done as governor of Maryland, piddling but entirely crooked: nothing big-time about it, nothing honest about it. He had to quit as vice president and go on probation, and that's about all anybody remembers of him, along with the golf balls and “nattering nabobs.” He was a zero, and his zeroness easily extended to being a flat-headed, cliché-ridden boob. Snobby liberals expected that of uncouth Rotarians, but even non-liberals withered under Agnew's dullness. “I don't think the man has had an original observation in his life,” says someone in Selling of the President, and the someone is a figure high up in Nixon's campaign team. This particular guy broods about the Soviet threat and the need for toughness; he's no bleeding heart. But he suffers when Agnew speaks. The banality cuts to some tender human core that must not be threatened; Nixon's man has to let out a yelp of protest.

The strange thing is that the yelp comes two pages after the quote that starts this piece. The Nixon man was listening to Agnew plod through an interview, and Agnew dropped his thoughts about aging and the ground rules of human existence, and this bored the Nixon man. The book itself was bored. You'll notice that the narrator curls his lip and says Agnew's tone “indicated he might doze before finishing the sentence.” Everyone seems agreed that Agnew was saying something banal.

“The ability to be happy is directly proportional to the ability to suffer, and as you grow older, you feel everything less,” Agnew said. I don't find that banal. I don't claim that everybody's life must follow the pattern Agnew describes, but plenty of lives do, and I think that's the shape of the basin, so to speak. Life has that shape, and the water will flow that way. Agnew is realistic about the balance between happiness and pain, about the trap of expecting life to be good instead of just acceptable. If somebody said his remark was a new translation of Marguerite Yourcenar, I would reflect that Yourcenar was a bit ponderous but had her wits about her and perhaps deserved her Nobel for great writing.

If nothing else, I would never expect a U.S. politician to be that bleak in public. You would think the Nixon man and Joe McGinniss would notice how downbeat Agnew's philosophy is. But nothing gets through to them. For them he's as routine as wall-to-wall carpeting. But if Agnew is saying what any middle-aged public speaker might have said in 1960s America, then I think some wisdom has been lost. Maybe they knew something.