Academic views the Left as a bunch of useful Idiots. 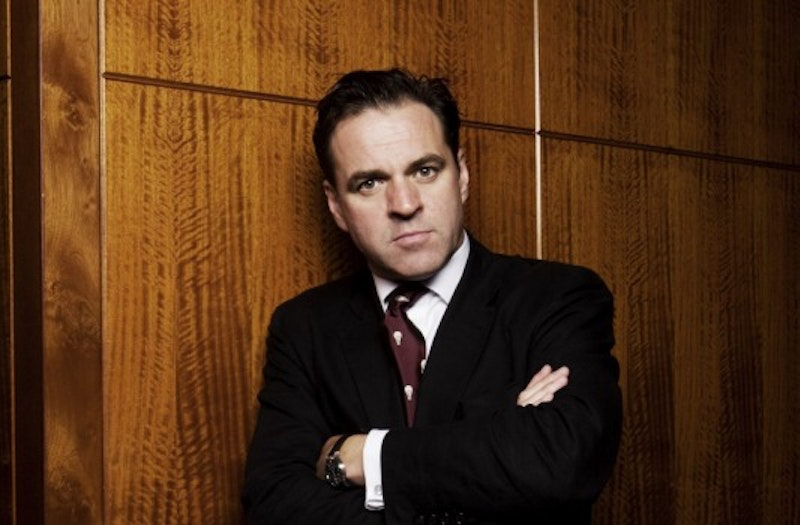 British historian, political commentator, and author Niall Ferguson winds up British lefties, who despise it. He nettled political opponents with his 2003 book, Empire, by running a cost-benefit analysis of the British empire and concluding that it had been a net positive. Critics have called his work “startlingly obscene” and accused him of being an “imperialist scumbag,” which he says is a manifestation of an emotional need he fulfills for them. In other words, Ferguson’s the perfect guest for Dave Rubin who, as host of The Rubin Report, relishes sending his legions of left-wing detractors into fits of rage.

Ferguson joined Rubin in his Los Angeles home studio for the latest Rubin Report episode. The topic: culture wars. He told his host that early on in his career, back in the 1980s, it was generally accepted that there’d be conservative historians on college campuses right alongside liberal and Marxist historians. Since that time, he said, “One history department after another has moved steadily and relentlessly to the monochrome left, which won that culture war.” Ferguson spoke of his naïveté in believing he'd spend his academic career in a meritocracy.

According to Ferguson, the defeat on campus was so incremental as to be imperceptible—conservatives got weeded out of history departments via attrition. Each year, someone dies or retires and gets replaced by someone specializing in, for example, “gender history.” The historian, who says he sees himself as a classical liberal rather than a conservative, told Rubin a personal story that shows just how bad things have gotten. When he arrived at Stanford University as a Senior Fellow, after 12 years at Harvard, the school’s history department treated him like a “pariah”—it didn't even set up a courtesy appointment. Ferguson found it ironic, given that he thought he'd probably written more history books than the entire department combined.

The conversation then turned to the topic that has the Left so agitated and confused—the Intellectual Dark Web, a loose network of mavericks that many observers are struggling to define. Ferguson defines it as comprised of people who are seen to speak for people who have been silenced and those who question the Left's dogma. His wife, prominent critic of Islam and former Muslim, Ayaan Hirsi Ali, has challenged that dogma for years and the cultish, regressive Left's thought police have always responded by smears rather than challenging her ideas.

Bari Weiss, in her controversial New York Times piece on the Intellectual Dark Web, expressed concern about the lack of gatekeepers for the renegade network. When Rubin brought up the question, Ferguson responded that gatekeepers would make it into merely a club, so keeping it open-access is the best option. He pointed out something that's been evident since the Weiss article shook up progressives—that the Left’s next culture war tactic will be to associate as many unsavory types as possible with the Intellectual Dark Web in order to discredit it, just as it's done with a number of its enemies by trying to place them in the alt-right.

Discussing the alliance between the Left and Islamists, Ferguson spoke of other historical “unholy alliances,” including the Molotov-Ribbentrop pact that forged a Nazi-Soviet agreement in 1939 shortly before both nations invaded Poland. He sees the Islamists as the leading partners and the Left as the useful idiots—the dupes willing to go along with lies like any criticism of Islam is Islamophobia and the headscarf is empowering to women. As a comparison, Ferguson cited the Soviets’ successful WWII recruitment of idealistic left-wing Cambridge University students such as Guy Burgess and Kim Philby of the Cambridge Five as spies/useful idiots.

The conversation shifted to Brexit, which Ferguson identified as a national referendum on mass immigration whose proponents weren’t particularly concerned about the attendant economic costs. He pointed to a question he'd been asked several times that he said couldn't be answered honestly by a Remainer without losing the debate: “About the 1.3 million Muslims the Germans has just let in, if the Germans give them German passports can they come here?” The Blair government, he told Rubin, had promised its citizens immigration in the tens of thousands and it ended up as hundreds of thousands. Brexiters saw the chaos in Germany and the waves of immigrants coming over European borders and said, “Get me out of here,” just as former Prime Minister David Cameron had once predicted.

Few are more qualified than Niall Ferguson to comment on how the Left's achieved its hegemony on college campuses over the last three decades in both the U.K. and the U.S. The culture wars stories he related to Dave Rubin are as depressing as they are fascinating, because conservatives becoming extinct in academia has allowed the worst of the Left’s excesses to flourish. And that was a major contributing factor to the backlash that got Donald Trump elected. Ferguson told Rubin at the end of their talk that he picks up his phone in the morning wondering if war’s broken out, if there's been a “palace coup,” or if his reputation’s been destroyed overnight. The veteran culture warrior’s nerves are starting to fray.