Joseph Rodota’s flawed, but still valuable book on the structure. 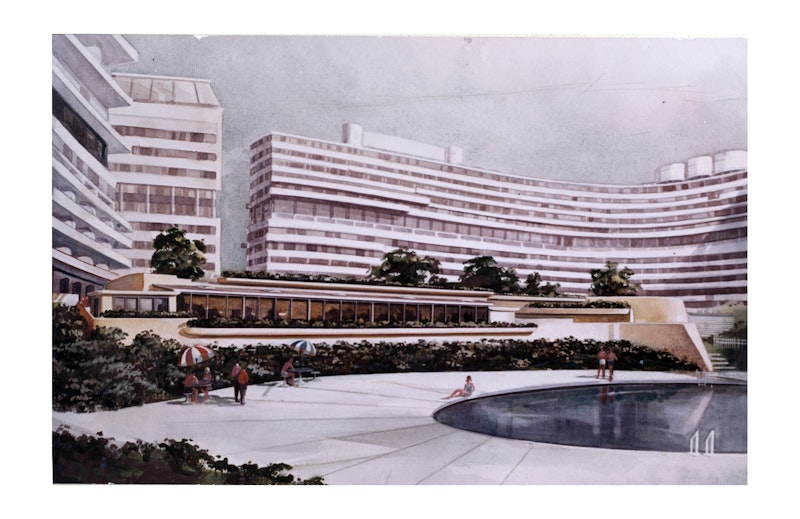 It’s easy in writing about American politics to forget that Washington, DC is a place, with its own history and its own psychogeography. The White House and the Capitol building and K Street aren’t isolated locales, but grow out of an urban fabric. Presidents and Congresses are hosted by a metropolis with its own life, a life shaped by, among other things, macroeconomic trends and planning commissions and the schemes of real estate developers.

It works the other way also. National political fortunes can change the city, one way or another. One group of people shuffles out, and another in. Courtiers orbit power, seeking sinecures, but must live somewhere close to the President they flatter. Of course the committees that administer major political parties must have physical offices. And sometimes those offices suffer a politically-motivated break-in.

Among the vexed places around which municipal and national politics swirl, the Watergate is one of the most notorious, a signifier often denuded of history. A name mostly without a place. Joseph Rodota’s recent book The Watergate: Inside America’s Most Infamous Address redresses the imbalance. Readable and useful, there’s nevertheless a sense of depths unplumbed: the feel of the place never emerges.

Rodota describes the history of the six-building complex in a linear, clear fashion. He begins with the plans of the Italian developers, discusses the vision of architect Luigi Moretti, and gives a blow-by-blow account of the negotiations with Washington authorities over the height of the Watergate buildings and how they’d impinge on the planned Kennedy Center for the Performing Arts. From there he splits his focus between the building’s ownership and maintenance, and the lives of the inhabitants of the Watergate—most notably Anna Chennault, who in 1968 maintained a backchannel between the Nixon campaign and the South Vietnamese government, but also including such other odd people as bibliophile and CIA librarian Walter Pforzheimer, or Aline Griffith, Countess of Romanones, self-identified anti-Nazi spy, and memoirist of debatable accuracy.

In Rodota’s telling, the six buildings of the Watergate complex have spawned intrigues since the time they were built. Most of those intrigues were petty, attempts to get around local zoning commissions or squabbles between tenants. One was very much not that, and the book’s narrative momentum peaks in the early-1970s. After that, however much Rodota (in common with many of the Watergate dwellers) wants to move on, he’s never quite able to get away from the shadow of that one particular break-in. Even Monica Lewinsky’s brief residence in the hotel during a later presidential investigation feels anticlimactic, mere event in the distant aftermath of the Watergate’s days of glory—or inglory, as the case may be.

A straightforward chronology has the benefit of simplicity. Here, though, it feels insufficient. Rodota smoothly presents a sequence of events, he ties together quotes from various documents and news articles, he includes material from some interviews of his own, and yet the resonances don’t connect. You get to know what happened at the Watergate, who did what when and why, but the sense of what it all means is lacking. What is this place that has become an icon while still remaining the everyday home of a large number of people?

It began as a state-of-the-art structure, an early example of computer-aided design producing a semi-circular shape to two of the buildings, incidentally producing more window-space. But the high-tech (for the 1960s) heating and air-conditioning systems didn’t last long. The Watergate’s position as a fashionable address didn’t last, either, famous burglary notwithstanding—a little too out-of-the-way, it didn’t age well, growing dated without becoming vintage, the ceilings too low, the load-bearing columns too thick. Much of the last section of the book is dedicated to following the not-quite-comic squabbling of the mostly-old mostly-rich mostly-white residents trying to keep the complex’s new owner from renovating.

I wish Rodota had dealt with the residents in a little more depth. What was the experience of living in the Watergate complex, especially during its moments of greatest notoriety? What was it like afterwards, as the hulking buildings aged badly? A conversation with a former concierge of the hotel gives Rodota a series of brief anecdotes, but they remain just that—anecdotes, without a sense that they illuminate anything, individually or collectively. The book could’ve used the Watergate as a way to speak about the times since it was built, and vice versa; but there’s not much here about broader social trends. A little about race, especially prominent in discussing Chennault’s life. Less about class than one might have expected. Not much about culture in general, the culture that produced the Watergate, the culture that was influenced by the place and its oddly resonant name.

What would we do without the Watergate? Rodota never explains the source of the name, other than to mention that a restaurant on the site used it before the complex was built. Without that famous compound word we would be lacking a tremendously useful suffix for the denoting of scandals. Did the Teapot Dome affair give us something to match? Consider “Contradome” or “Weinerdome.” It’s too much to say we should be thankful for the Watergate scandal, but it’s another reason to be thankful the faux-plumbers were caught.

Rodota’s Watergate may not have the resonance of his subject, but it at least captures the scale, creating despite itself an image of the privileged and the powerful at home in a leaky, drafty building built with the finest technology the 1960s had to offer. As with so much to do with politics, it’s a fascinating book, so long as you know to read between the lines.