Newt Gingrich and How America Got So Rotten 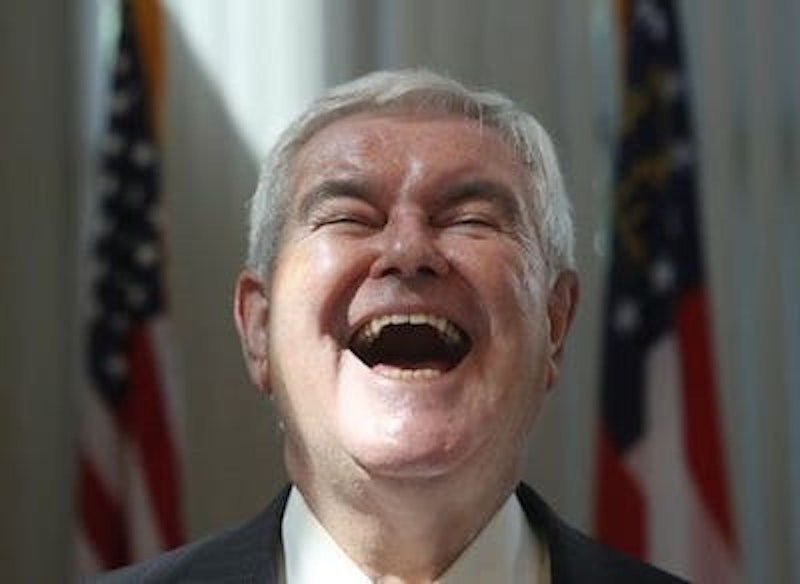 Junkification is a theme of Newt Gingrich’s career. The line is traced by McKay Coppins in his fine new profile (“The Man Who Broke Politics,” The Atlantic) of the ex-politician and world-historical popcorn ball. Gingrich took the crap side of political discussion—abuse and random accusation—and built himself a congressional majority. Our system has never recovered, by which I mean the Republicans never learned to behave differently.

Gingrich admires a book called Chimpanzee Politics, which we’re told is about “the complex rivalries and coalitions that govern communities of chimps.” The profile takes a look at Gingrich’s love for spotting, or imagining, the bare monkey ass that bobs beneath our doings. Coppins also underlines where this love has come out: in allegiance to Donald Trump, the “apotheosis” of Newt’s “primate politics.” And we’re given a phrase to sum up Newt’s real, if unstated, mission: “an effort to strip American politics of the civilizing traits it had developed.”

Civilization, as an idea, came in for a mass beating during the 1960s. The kids weren’t the only ones trashing it, but they provided most of the numbers and acted out the program. “If it feels good, do it,” long hair, free sex, on-stage musical howling and dick-wagging, the trashing of university classrooms—the evidence is familiar. Then the kids got older and we had the Conservative Opportunity Society. The kids got older still and we have Donald Trump drinking a Diet Coke and watching Fox & Friends in the White House. Because civilization never went away, it just got bad at being civilization. Trump isn’t a king primate. That fat-faced douche couldn’t make a fist. He hires people to be tough for him: big people, as in bodyguards, for the physical stuff, and lawyers for business. Trump says hard things when somebody is far away, but in person he flatters; that’s unless he’s talking to some unfortunate who’s safely beneath him, such as an employee.

Berating these victims may reflect primate hierarchy, but it isn’t the tough part of being a primate. That involves surviving in the wilderness and beating up other primates, as opposed to inheriting money and then spending it in view of the press. As everyone has said, Trump played a businessman on TV, and that career made him president. Being on air and in print has also defined Newt’s career, as Coppins brings out well (“If you’re not in The Washington Post every day, you might as well not exist”). Which brings us to another Boomer theme, the belief that show matters more than fact. This notion was building before they came along, and has swamped us after, but the cross-over came while the boomers enjoyed their prime. Among other things, they made politics into a new brand of show biz, with Rush Limbaugh showing the way. Junkification once more, since politics must deal with what is or else it fails (see the Iraq War, which did make for good footage on TV of pundits jutting their jaws).

But the GOP developed an entertainment wing that out-shouted its governing wing, and today the former has taken over. Newt was the chief member of the governing wing who could double as an entertainer, and he made politics a matter of providing the media with fights and punchy phrases, since those play well on television. Now the leader of his party isn’t just an entertainer but a viewer, somebody who watches the pageant on Fox and thinks it’s true. He likes Newt on there, and Newt makes a rich living by running his mouth before cameras and audiences. In between he may cruise in his limo and slurp a drink from McDonald’s.

Both men like blow-jobs and that’s something we’ve read in the press, and one of them is president. Some soul with Brylcreem in his hair might’ve looked at the kids in 1968 and predicted it would come to this: not with rebellion and a new society, but with spoiled brats stuffing their egos and their mouths and watching TV while America’s institutions founder. (Did you know the President may be a traitor and that his party doesn’t want him caught?)

“The old order is dying,” Newt says. “Almost everywhere you have freedom, you have a very deep discontent that the system isn’t working.” Well, no wonder. Those punk kids took a perfectly good, or pretty good, political system. And now look.