Rotten apples: political partisans leap to interpret (far too many) polls for their side. A meaningless exercise. 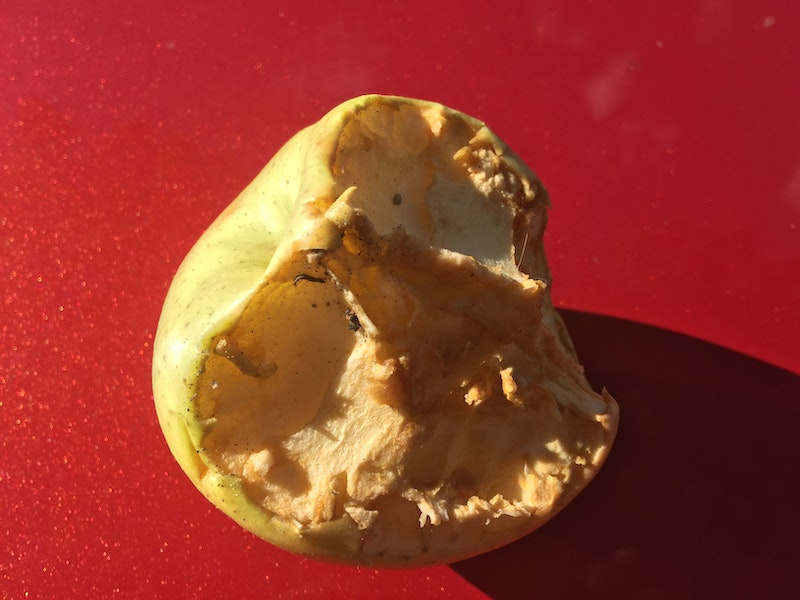 My side’s winning! Democrats have a nine percent lead in who should control Congress!

My side’s winning! Trump’s approval rate is up to 47 percent, the highest of his presidency! And House battleground states are split between Republicans and Democrats!

This latest social media pandemonium on Sunday was the result of the latest Wall Street Journal/NBC News poll, conducted among 900 registered voters—including 645 “likely” voters—in mid-October. As polls go—not very far for several years—this is an important one, but it was hilarious how Republican and Democratic partisans all claimed victory, as if the midterm elections were this week. Every armchair expert was parsing the fine-print numbers, clicking on Nates Cohn and Silver to verify or contradict their enthusiasm, some claiming The Blue Wave is a-comin’, while others insist the election will result in a stalemate.

Most importantly, almost no one knows what the fuck they’re talking about. The concept of American electoral politics as a major sports event/reality show isn’t new, but it’s certainly reached an absurd new level in 2018. I asked a friend of mine, a conservative #NeverTrumper, what he made of it all, and he was more succinct and honest than anyone on Twitter (which he eschews): “I have no idea. I’ll find out around 11 p.m. on Nov. 6th, if I haven’t hit the hay. I just don’t follow this stuff like I used to.”

My own two cents—which is worth about half that—is that the Democrats will win 35-40 seats in the House for a majority, and the Republicans slightly expand their Senate majority to 52 or 53 seats. A caveat: that’s what I predicted a year ago, banking on historic House losses for the party in power, and a Senate map that’s unforgiving for Democrats, especially those who won in the Obama reelection six years ago. And even if my opinion is worth a penny, it’s just as valid as those who spend hours every single day trying to muscle their side to victory.

The unknown factor is what captures the public’s attention two days before the election. A couple of weeks ago it was the Brett Kavanaugh election—now it’s “Brett Who”? So much for Ronan Farrow and Jane Mayer. The poll says Republicans have a 17-point advantage on “trade issues,” which may be true, but how many Americans put trade as their number one concern?

My top issue is comprehensive immigration reform, legislation that would make it easier for immigrants to become citizens and put all of Trump’s heinous Xenophobia and baloney about “The Wall” in the gutter, where it belongs. But that question wasn’t asked, at least in the Journal’s story about the poll. (I can’t make an educated comment on the current Honduran caravan fuss, since the details are so fuzzy. But I wouldn’t put it past the RNC or DNC to have funded it all, to gin up their vote totals.)

I don’t need to read any more op-eds about the midterms. A few weeks ago, The New York Times published a very lengthy and detailed investigation about Trump’s multiple tax dodges—some kosher, some in a gray area that might or might not reach court should the Democrats win both chambers—that disappeared in about 36 hours. Frankly, I think the story, which took more than a year to complete, is pure Pulitzer-bait, just like Hollywood movies that are released in December. That’s cynical, but surely the Times knows that Trump, the first presidential candidate who refused to release his tax returns, is inoculated on this issue. Voters don’t care. (And let’s not forget that the Sulzberger family has kept control of the Times Co. by keeping a battalion of tax lawyers working around the clock.)

A story I’d like to see—from the Times, Journal or Washington Post (no other dailies have comparable juice anymore)—is one that pinned down every single member of Congress, as well as candidates on their immigration stance. The team of reporters would brook no ducking or spin: just a yay or nay on the immigration question. That would be valuable, for it encompasses what the country’s elected officials believe about economics, law enforcement, discrimination, assimilation and ultimately the character of the United States. Such a project would never reach fruition, however, because the three papers listed above have a specific bias. Ostensibly, all three are pro-immigration, but I doubt the Times and Post would want to expose Nativist Democrats who are hiding behind the GOP’s outspokenness on “securing” the borders; on the other hand, the Journal, which prefers a GOP-controlled Congress, has no interest in showcasing the Party’s nearly monolithic animus towards “foreigners.”

I did get a kick out of Nicholas Kristof and Frank Bruni, writing in the Times’ “Review” section on Oct. 21. Kristof, as solipsistic as ever, wrote: “America needs a robust center-right party to hold progressives like me accountable… Unfortunately, the principled version of the Republican Party in Congress has virtually collapsed, a crisis compounded by the death of Senator John McCain.” What drivel. First, who doesn’t believe, despite his protestations, that Kristof wouldn’t prefer a Congress that was as lopsided in favor of Democrats—sorry, “progressives”—as in FDR’s day. Two, the myths surrounding the very malleable McCain continue to grow; it’s astounding, and Teddy White (with Jackie’s help in building the Camelot hagiography) had nothing to do with it. Paraphrasing the old political cliché, the beatification of McCain has 100 fathers.

And Bruni, writing essentially the same words for the 50th time, complains that the media pounced on Elizabeth Warren’s DNA stumble—he admits she screwed up—while Trump gets away with a gaffe every day. Scoop! You’d think someone as ostensibly as bright as Bruni would’ve accepted this really weird Trump phenomenon, a first in modern American politics.

But no. He concludes: “[Trump’s] the sad, bad actor. We can’t let his relentless spectacle obscure that.” Here’s a bet I’d gladly make: Trump’s a lot less “sad” than Bruni today.