The Farrakhan Problem Has Always Been in Plain Sight

The choice to disassociate with the propagator of such psychotic drivel should be reflexive. 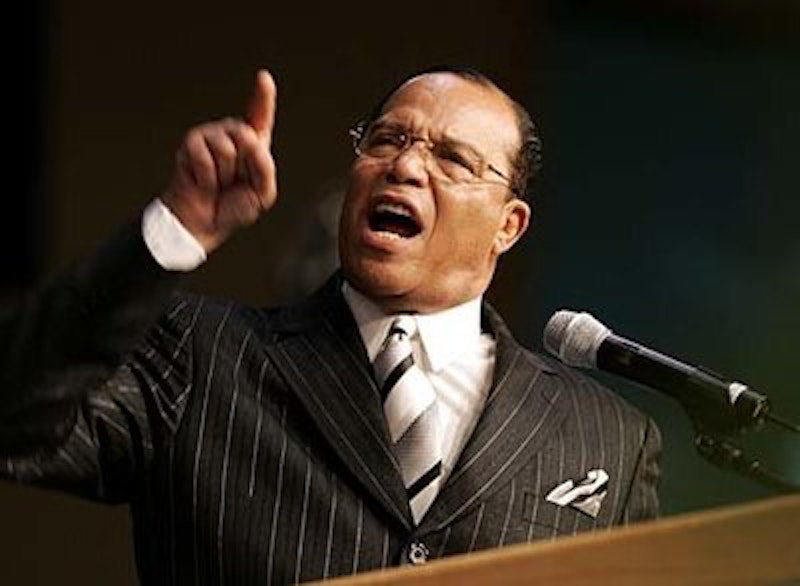 Louis Farrakhan—the longtime leader of the Nation of Islam—has been an anti-Semite, homophobe, misogynist, racist, and outlandish conspiracy theorist for his entire public life.

Yet it's only the recent controversy over Women's March organizer Tamika Mallory's enthusiastic attendance at a recent Farrakhan event where the minister delivered a speech larded with his brand of typically paranoid bigotry (e.g. "The FBI has been the worst enemy of Black advancement. The Jews have control over those agencies of government.") that’s sparked a long-overdue discussion over whether associating with Farrakhan should be deemed—in the preferred terms of intersectional activism—"problematic."

Mallory attempted to tiptoe around the issue, as have her fellow Women's March organizers Linda Sarsour and Carmen Perez, both of whom have publicly worked with and praised Farrakhan. In the wake of the controversy, the Women's March released an official statement disavowing anti-Semitism and homophobia, but pointedly abstained from any denouncement of Farrakhan himself. This is in line with Perez's previous stated position on the Farrakhan problem, which is that it’s a "distraction" and "there are no perfect leaders."

Right-wing media was quick to pile on this flagrant hypocrisy, especially given the stated Women's March ethos of intersectionality, which demands all of its allies maintain the same politics on any number of issues seemingly unrelated to feminism. Concurrently, a number of voices on the left declared Farrakhan an irrelevant right-wing boogie man with little influence. But that one of the Women's March organizers considers Farrakhan a "leader" and politicians such as Illinois State Rep. Danny Davis are willing to go on the record scoffing at any concerns over his close relationship with Farrakhan and the "Jewish question"—the idea that Farrakhan is not a prominent, if controversial, leader among substantial segments of the political left is a risible claim.

Most Democratic politicians are acutely aware that direct associations with Farrakhan are toxic, which is why a recently published photograph of then-Sen. Barack Obama posing with Farrakhan at a 2005 meeting of the Congressional Black Caucus was held under wraps for over a decade, and Rep. Keith Ellison's past associations with the Nation of Islam may have cost him the DNC chairmanship. But while Farrakhan might be electoral poison, he's still influential enough to command an audience with members of Congress.

In pop culture, Farrakhan has loomed large for decades. Chuck D called him a "prophet" on Public Enemy's legendary 1987 track "Bring The Noise," Arsenio Hall treated him to a fawning interview on his eponymous late night show in 1994, and Spike Lee made a whole movie (Get on the Bus) about a group of men attending Farrakhan's 1995 Million Man March, which itself was attended by a number of towering artists, including Stevie Wonder and Maya Angelou, both of whom spoke at the event.

Farrakhan was not just a 90s phenomenon: in 2003, MTV had Farrakhan host an attempted peace summit between feuding rappers Ja Rule and 50 Cent (the latter didn't show up) and even in the present day, major mainstream rappers like Kanye West, Killer Mike, and Rick Ross have have praised and sought Farrakhan's council. Snoop Dogg's a fan, too, even posting a photo of former calypso singer Farrakhan's 1984 single "Let Us Unite" to Instagram.

The Nation of Islam's in-house publication, The Final Call, posted an article last week in defense of Farrakhan and the "Jewish and Zionist groups who have harassed, slandered, and stalked" the minister, and in a photo gallery eerily reminiscent of the anti-Semitic congressional candidate Paul Nehlen's notorious tweets, CNN's Jake Tapper is included among the Jewish "deceivers" for being the rare mainstream media voice willing to unequivocally condemn Farrakhan and ask why it's so hard for so many others to do the same.

Rolling Stone writer Jamil Smith recently tweeted that while he was studying abroad in 1995, had he been in the United States he wouldn’t have considered going to the Million Man March, adding, "My reasoning at the time remains the same today: I never want to associate myself with Louis Farrakhan, in any way. This isn’t difficult."

When President Donald Trump refused to unequivocally condemn the white supremacists who marched in Charlottesville last summer—instead lamenting that the deadly violence that claimed the life of a woman protesting neo-Nazis had been the responsibility of those "on many sides"—he missed what was perhaps the easiest layup in political history. If some of Trump's most prominent activist opponents—the Women's March organizers—can't bring themselves to denounce Farrakhan and his repellent ideology, then they're missing their layup, too. Should they find their motives thrown into question as a result, they’ve no one to blame but themselves.

Farrakhan might not be as mainstream as he was 20 years ago, but he’s hardly marginalized, and it's simply a cop-out to argue that his stature as an elder statesman of civil rights activism is a right wing-created distraction. The views he espouses on a regular basis including praise of Hitler and interludes about the "Satanic Jew"—should make him a pariah, as they would most people, and yet he inexplicably maintains a position of moral stature to many prominent and influential figures.

If intersectionality means opposing bigotry in any form, then Farrakhan should have no place in any community that claims to stand for universal human rights. And even if you don't buy into the strict and often contradictory orthodoxy of intersectionality, Farrakhan's rhetoric is so beyond the pale that it remains a marvel to watch seemingly intelligent people contort themselves into pretzels to justify his claim as some sort of beacon of morality.

Farrakhan is a bigot many times over, an unhinged conspiracy theorist who blames a conspiracy of Jews and the U.S. government for the 9/11 atrocities, and believes in something called "the Mother Wheel," which was described in a 1996 New Yorker profile of the minister as a "heavily armed spaceship the size of a city that will rain destruction upon white America, but save those who embrace the Nation of Islam.”

The choice to disassociate with the propagator of such psychotic drivel should be reflexive, easy. But when Mallory was first mildly criticized for her attendance at the Saviour Day event where Farrakhan peddled his thoughts on transgender people ("the Jews were responsible for all of this filth and degenerate behavior that Hollywood is putting out turning men into women and women into men”), she tweeted, "If your leader does not have the same enemies as Jesus, they may not be THE leader! Study the Bible and u will find the similarities."

Here's a modest proposal: when you've found yourself in problematic waters because of your association with an anti-Semite, don't boast about having "the same enemies as Jesus." This isn't difficult.