A little truth, all right? 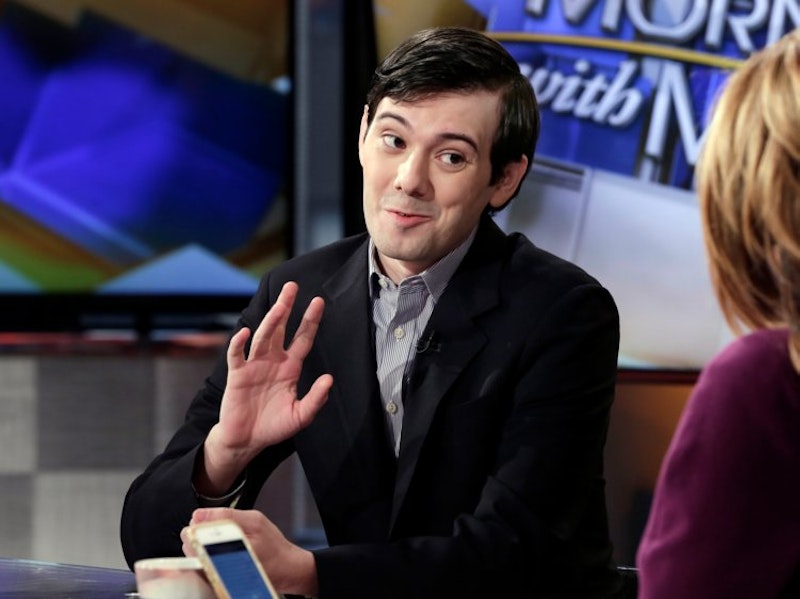 Look on this post as an experiment. I’m about to make a simple point that’s all but impossible to get across. The point is summarized in this piece’s headline. Now I’ll expand, for whatever good it will do.

Martin Shkreli is the dingy, punchable creep who exploited HIV victims for profit. Then he bought the only copy of some rap group’s album and wouldn’t let people listen. Now he’s going to jail for investor fraud. Along the way he got himself banned from Twitter by pestering a journalist named Lauren Duca. She drew his fire by being notably anti-Trump and also by being young and good-looking.  First, he kept asking Duca out via direct message, and doing it to rattle and annoy her. Then he re-did his profile page so it featured a Photoshopped picture of Duca on his lap. Then Twitter got rid of him.

Last week Shkreli was sentenced to seven years in prison, news that he greeted by crying and begging in the courtroom. Duca responded to his sentence with this tweet: “Martin Shkreli repeatedly announced that he was going to sleep with me after the trial, as if I was a toy for him to play with. Once he did it via video, here it is in a signed letter. In conclusion, I'm sure they have plenty of one-of-a-kind Wu Tang Clan albums in jail.” I bet they don’t, but the trouble is this: the letter is linked to the tweet, and the letter doesn’t say Duca will sleep with Shkreli.

Here’s the text: “Thank you for your letter. I cannot respond to your request due to poor prior prior poor experiences with reporters, also [I] find posting on Social media more useful than engaging (and helping) large media companies. By the way, if Lauren Duca has finally become enamored of me, it would be my pleasure to become more intimate with her. I expected that with a verdict of ‘NOT GUILTY’ this would be a foregone conclusion. Unfortunately, the jury returned a split verdict, and I also may have made a faulty assumption in my initial calculations. Anyway, if you could update me on her interest level, I will cross my fingers until I receive your response. Thank You, & Trump 2020.” The letter was sent last year to the journalist Brian Patrick Byrne, who tweeted it now that we have a verdict. Byrne notes that the creep “definitely did not sound like he expected to be crying at his sentencing.”

I find it hard to tell what Shkreli was expecting. Gallows humor can pop up in prison letters, and this letter has a mordant sound to it. For her part, Duca seems to have missed that note altogether, and why not? If some jerk is sniffing after you, you may not notice or care if his eyebrow is lifted. Even so, the text doesn’t match what Duca claims. In this letter, at least, Shkreli doesn’t announce that he’s “going to sleep with me after the trial, as if I was a toy for him to play with.” Note these phrases from the letter: “if Lauren Duca has finally become enamored of me,” the dry “I also may have made a faulty assumption in my initial calculations,” and “if you could update me on her interest level, I will cross my fingers.” Some toy—he’s hoping and praying she’ll smile his way.

Lovelorn men should recognize the joke being made by Shkreli. In classic form, it runs like this: “Angelina Jolie [or any other famous and unapproachable beauty] is my girlfriend. Of course, she doesn’t know that.” The poor fool matters nothing to her; instead he must tell himself stories. That’s the joke. The special, Shkreli twist is that, before making this joke, he’d been persecuting the woman in question. No wonder Duca’s skin crawls.

But there’s the rest of us. That’s a short letter and we know what’s in it, and those contents aren’t what Duca says. That’s my point. This point matters little to the big questions pressing on top of us: Shkreli’s awfulness, the unfairness that women should be persecuted. Still, the point matters to… what? Perhaps to learning how Shkreli thinks, if somebody wants to do that. Perhaps to some other subject nobody has in mind just now. But we have to keep the facts clear if we’re going to learn from them.