It's Not About Left and Right

The way we think about politics won’t survive this era. 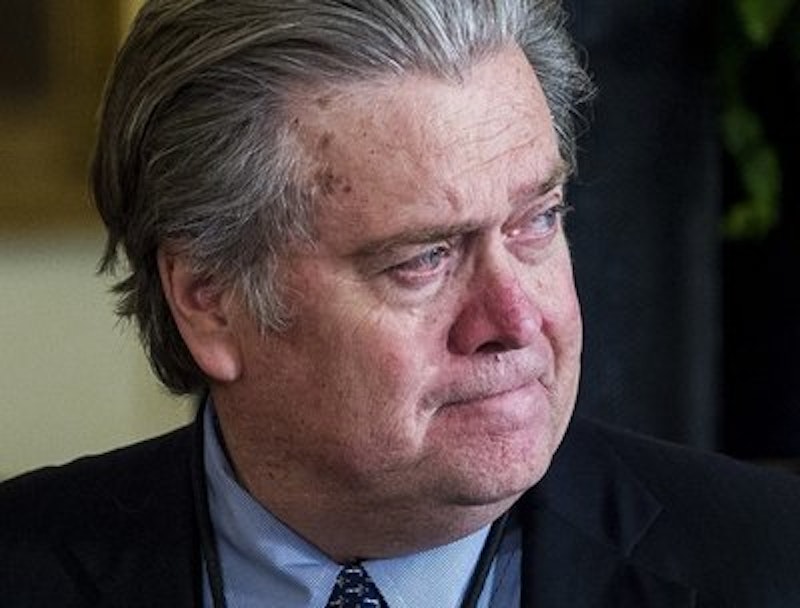 Though he’s to rumpled, unshaven sixtysomething white guys what Beyonce is to black women, Steve Bannon is wrong about many things. "Let them call you racist… Wear it as a badge of honor," he told the French National Front meeting in Lille, and I'm not sure that’s good advice, from a number of angles. But he's got a point about this, which he also told the French political party routinely described as "far right": "It's not about left and right." What "it" is about, for Bannon, is nationalism against globalism. He left us with a stark choice, “Do you consider the nation state an obstacle to be overcome, or a jewel to be polished, loved and nurtured?”

Leaving aside the key question of whether jewels can be nurtured, I’d point out that the power of the nation state rests on coercion and has been the perpetrator of the most annihilating wars and genocides that our species has ever produced, the very worst evils of which we’ve ever been guilty. You don’t get to the Holocaust, the Killing Fields, the forced collectivization of agriculture, the world wars, or the possibility of nuclear annihilation under any other auspices. At a minimum, some nation states are more worth nurturing than others, and Bannon's very general choice is just too general.

But at the moment nationalism against globalism seems more explanatory than right against left. It must’ve suddenly struck Mitt Romney, just as he pulled that lever for Hillary Clinton, that there was little substantive disagreement between her and himself. I'm trying to remember, right now, just what Barack Obama and Mitt Romney actually disagreed about in 2012. From the point of view of now, they tried to motivate voters by emphasizing slight divergences. Mitt wasn't proposing walls or the execution of drug dealers; he wasn't trying to sow racial division or fire the FBI. I'm struggling to recall some of the major things about which Hillary Clinton disagrees with Lindsey Graham.

Certainly, a party that includes Obama and Romney, Clinton and Graham, would make much more sense than a party that includes any of them and Steve Bannon or Sean Hannity. Perhaps all they ever really disagreed about were details of their globalism, or slight adjustments to the technocracy. This must be growing obvious even to them.

If you're Paul Ryan right now, your ideology is exploding. A couple of years ago, Ryan was a deficit hawk and free trader. Trump is ready to spend trillions we don't have, like Obama in 2008 but without the economic crisis to excuse him, while simultaneously passing tax cuts. Ryan is a very capitalist person, and that entails free trade; as Trump implements wide new tariff systems, continues to withdraw from or re-write agreements, and enters into the trade wars he's been enthusing about on Twitter, Ryan's support grows ever-more incomprehensible.

In other words, the rise of "nationalism" and "populism" of the sort represented by Trump, as well as by Brexit, the nationalist governments of Poland and the Philippines, and the Italian Five Star movement, should have the effect of changing the political spectrum, making allies of former enemies, or showing what they always had in common.

What the reconfiguration shows is the underlying incoherence of the left and right as those have existed in American and European politics for the last few decades. During the period, many on the left and the right have understood conservatism, fundamentally, as the advocacy of small government. They associate this ideology with people like Reagan and Thatcher; the left calls it “neo-liberalism.” Perhaps this is the way Paul Ryan conceives, or at least markets, his own position, and it slides toward the libertarianism of Rand Paul and beyond. But Trump and Bannon have no interest in shrinking the size of the government, nor could anyone who regards himself as an authoritarian avatar of national greatness.

During the campaign, Trump signaled no substantive cuts to social programs, and promised to beef some of them up. He demanded steep increases in military spending. These positions are compatible and are characteristic of nationalism (and even, historically, fascism) the world over.

Meanwhile, the suddenly obvious fact that mainstream Democrats and mainstream Republicans substantively disagree about very little—on the technocratic shape of American and global capitalism, on the role of the state in the everyday life of people, on the conduct of American foreign and military policy—ought to make leftists extremely uncomfortable with their leaders, and lead to a split. Obama, Romney, Graham and Clinton are all agreed on a vision of global capitalist gigantism, intertwined with the state, or a Chinese-style merger of state and economy. This system amounts to a global economic hierarchy with people like themselves at the pinnacle.

That doesn’t sound much like economic justice of the sort the left purports to be fighting for: thus the rise of the “left” populism of figures like Elizabeth Warren, Bernie Sanders, and Jeremy Corbyn. Really, it’s a “conservative” movement, by and large turning back to the classical socialism that mainstream left parties abandoned entirely under Tony Blair and Bill Clinton.

So one effect of the rise of the nationalist, implicitly or explicitly racist right all over the world should be a reconfiguration of political parties. I'm not sure whether the Democrats and Republicans are just too ridiculously entrenched to collapse or split, but they need to, as the existing coalitions make no sense. Perhaps what's holding the parties together now is not political ideology at all, but “identity politics,” and by and large matters of race and gender have replaced economics as the basic ground of political affiliation. This too suggests that the mainstream right will be forced to break with Trump, or else they're going to be wearing the racism as a badge of dishonor.

The senselessness that always lurked at the heart of the left-right spectrum is made obvious by the current reconfiguration. I don't believe, in other words, that the way we think about politics will survive this era.