God Is on Life Support

The noise of Evangelicals in this election is a whisper. 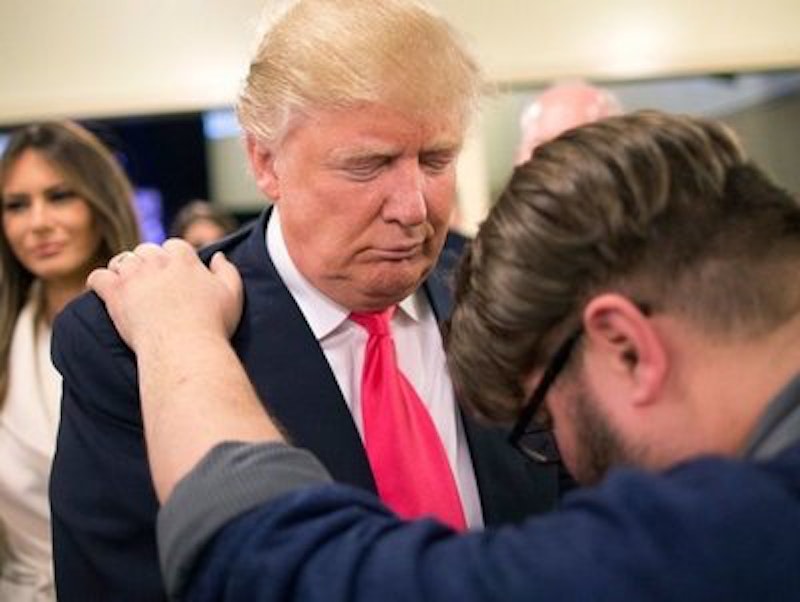 God is dead. Well, almost. We know that God is on life support because Pew Research Center says so. He, She or It has been around a long time, always, theologians say. But the number of people who believe that is rapidly diminishing. The departure from theological orthodoxy is occurring at the intersection of religion, science and politics, say those who’ve fled the flock. That, in a word, is why subscribing to God and religion is called faith.

This general election cycle, unlike 2012, has witnessed very little attention to God or religion. The rare exception has been Donald Trump’s casual reference to “crackers” and wine at Methodist services, and Hillary Clinton’s professed reliance on her faith, also Methodist, as backbone to her resilience and survival, mainly against the vast right-wing conspiracy. (Five presidents have been Methodist—James Polk, Ulysses S. Grant, Rutherford B. Hayes, William McKinley and George W. Bush.) Whereas, a presidential election ago, religion was front and center as an ink-blot test of acceptability for office and an exaggeration of stereotypical bugaboos. Mitt Romney’s Mormonism was viewed by many as outside mainstream Protestantism primarily because of its perceived views on matrimony and secret rituals. And President Barack Obama was considered a Kenyan socialist who consorted with a proponent of the radical Black Liberation Theology, Rev. Jeremiah Wright.

And on another point of departure, God and religion have, or has, had little mention or played no measurable role in the general election campaign as compared to its significance in the Republican primary elections. Yes, the rules of engagement of a general election differ in kind and degree from those of a primary. But the so-called evangelical vote, considered so significant in the primaries, has all but evanesced since the GOP convention and its noise level, to the extent that it still manifests itself, is vaguely a whisper. But now that Sen. Ted Cruz (R-TX) is re-activated in Trump’s behalf, God and religion may re-enter politics, especially where Trump and Cruz would manipulate Supreme court appointments to (1) reestablish religious freedom (essentially repeal the First Amendment), and (2) repeal the Johnson Amendment which prohibits churches from engaging in partisan political activity or lose their tax exempt status.

For the most part, Americans brush aside such narrow and quixotic arguments. All but the most zealous subscribe directly to the teaching of Christ on the issue of separation of church and state: “Render to Caesar the things that are Caesar’s, and to God the things that are God’s.” (Mark 12:17.) In other words, the two are a toxic mix and, in most cases, should butt out of each other’s business. Americans, and many other democracies, have made peace with the notion of separatism. It’s called pluralism. Government and religion operate on parallel tracks and rarely meet. But there are those, of course, who believe that America is God’s masterwork because the name is inscribed on our currency and included in the Pledge of Allegiance—two afterthoughts that were championed by President Eisenhower in the 1950s.

The Pew numbers are advancing the idea of a church-state firewall in a forceful and dramatic way. They say that America’s going to hell in a handcart, if such a thing as a theological hell exists. A quarter of the nation’s 310 million people now have no affiliation with any religion, and half the Americans who have left their churches, for whatever reason, say they no longer believe in God. To some extent, those spiritual drop-outs can be attributed at least in part to the modern presentation and perception of religion itself and what the three major religions have allowed themselves to become; Christianity as a magic show, Judaism as a food festival and Islam, at the risk of precipitating another Charlie Hebdo event, an eternal erotic experience.

The Pew research revealed that about a quarter of those surveyed said they no longer subscribe to organized religion and nearly half said they just “don’t believe.” Plumbing deeper for reasons of those who gave up on God and religion, Pew found “science,” lack of “belief in miracles,” “common sense,” and “lack of evidence” as intellectual hat-racks. Others said, simply, that they “do not believe in God.

Millennials find religious institutions especially unappealing. They appear motivated more by the social gospels, or good works, as taught by Christ, than in doctrinaire teachings as proclaimed by churches. The God of their parents as a bearded and vengeful old crank who commands constant worship and adulation does not exist in their pantheon of expression but only as a trope in the Old Testament. And as many religionists, especially fundamentalists, often dismiss the foibles of man as the will of God, young people are more inclined to place blame squarely where it belongs—to those here on earth, in a kind of worshipful pantheism. Yet despite their good intentions, whatever the motivation, millennials remain blissed out on politics. A recent survey showed young people in Nevada preferred voting for legalization of weed vs. choosing a president.

Those religious distinctions do not appear to be of major relevance in this election cycle although within those numbers is a prop or two of the Obama coalition that Clinton is not only trying to replicate but to expand. And as for the role of the Almighty in this or any other election, God favors the candidate with the best get-out-the-vote operation.