Thoughts on her secret audiotape. 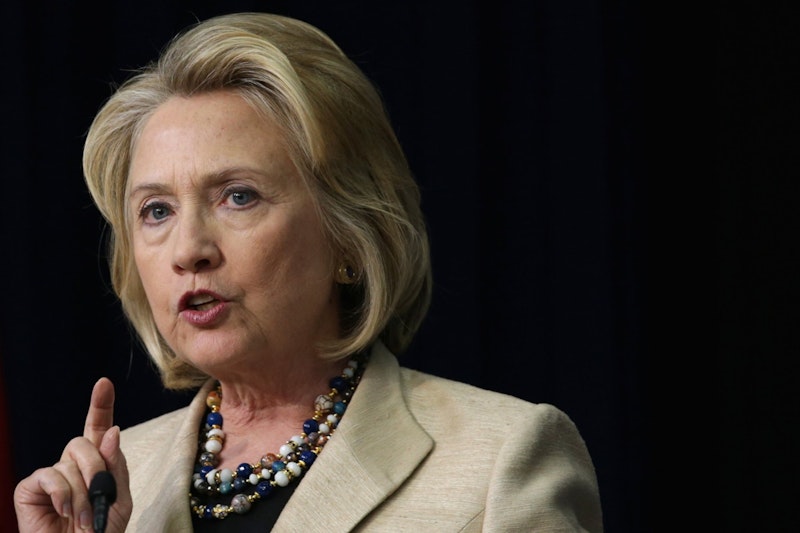 Hillary was being polite. “A barista, or you know, some other job that doesn’t pay a lot, and doesn’t have some other ladder of opportunity attached to it,” she said in her secret remarks at the fund-raiser. That’s much nicer than dead-end job. When she talked about “living in their parents’ basement,” she wasn’t being mean. She didn’t paint the kids as loafers, she pointed to the times: “They’re children of the Great Recession.” The jobs aren’t there, so college grads have to scrape for tips.

Admittedly, Hil doesn’t have much use for these people as political thinkers or policy analysts. According to her, they think “We just need to, you know, go as far as, you know, Scandinavia, whatever that means, and half the people don’t know what that means, but it’s something that they deeply feel.” But she buys them as an interest group: she accepts that their grievance is real. The question is what to do about it. Not much, in her view, because the U.S. isn’t up to much. Getting Obamacare and Dodd-Frank and the rest has been such a battle that our best bet is to add a bit here and there at the edges.

Hillary says that, to reach the “idealists” who want free college and health care, we should “take what we can achieve now and try to present them as bigger goals.” Her husband spent most of his time in office doing that. After 1994, when the Democrats lost Congress, going after big goals became a dream. Today Congress is still lost. The kids want a revolution, Hil says, and she wants to know how that works when you can’t vote anything through. “In order to have the revolution, first we have to take back the Senate and get to 60 votes,” she says. “Then we’ve got to take back the House, and that may require some redistricting in order to get people out of safe Republican seats, so they can be competitive again. I think we’re already in year six or seven of a two-year term.”

Meanwhile, an entire generation has been shafted. At least they’re not alone. “People are feeling deep down, they’re feeling discouraged,” Hillary says after discussing Flint. “They’re feeling that their government doesn’t listen, the political system is gridlocked and the economy isn’t working. That is dangerous for our country.” These words have received as little attention as any part of her remarks. But they’re important. To translate the thought: this system is busted and the people are getting fed up with it. A happy thought from somebody who 1) is likely to be in charge of the system, and 2) sees no way to fix the system, only to keep it sputtering on.

“Chye-nuhh.” The SNL debate sketch opens with Hillary coughing and wobbling along on a cane. Then she throws the cane away and does a somersault. “I’m better than ever,” she says. “Let’s do this.” That’s sketch comedy as boosting rather than mocking. The bit enacts exactly the line Hillary’s camp would like us to take regarding her health scare. In SNL’s defense, it’s also the line most of us took on our own. Four seconds of video gets beat hollow by a hundred minutes of real-time network debate. By the end of the debate, the health scare was gone. Anyway, all anybody wanted to talk about was Donald Trump.

For the past year I’ve been reminding social media that I want HBO to make a movie called Meltdown and that it should star Alec Baldwin as Trump. There’s no word that the movie will ever exist, but thanks to SNL we now have Baldwin’s Trump and it’s first-rate. There’s no “yuuuge” and no “Believe me.” Instead Baldwin captures the things that are hard to get: for instance, Trump’s stop-start rhythm when he wants to make a phrase pop. (“The thing-about-the blacksss… is that they’re killing each o—therrr.”) If my Meltdown vision ever becomes a film—and if it stars not just Baldwin as Trump, but Meg Ryan as Kellyanne Conway, and Gary Oldman (plus CGI) as Roger Ailes—then our country can die at last. I’m not saying it’ll be worth it, but at least we ought to get something good out of the mess.