He set the tone for modern political cynicism. 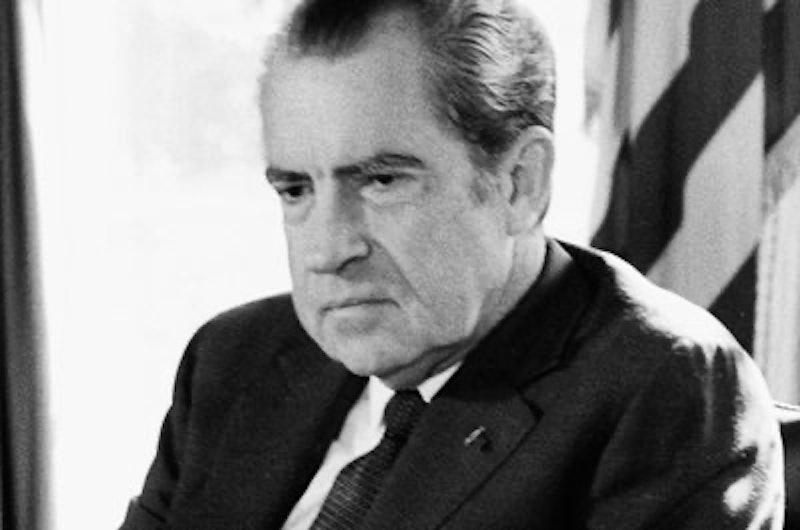 Skimming through two recently released books on Richard Nixon - Tim Wiener's One Man Against the World: The Tragedy of Richard Nixon and Evan Thomas' Being Nixon: A Man Divided - I was reminded of the unprecedented amount of information out there on this one President. Nixon taped hundreds of hours of conversations in the Oval Office because he saw himself as no ordinary politician, but rather as a statesman - maybe even Churchillian - and he wanted the details of his Presidency to be shared with posterity. The million dollar question is, "Why didn't Nixon erase the tapes when the Watergate story broke?" It's doubtful that he would have had to resign his Presidency had he done so. He later revealed that he had, in fact, ordered his chief of staff H.R. "Bob" Haldeman (who he had dramatically designated as his "Lord High Executioner") to destroy most of the tapes in April of 1973. Haldeman didn't follow his orders, perhaps thinking he'd be thought of as the mastermind behind the Watergate cover-up without the tapes.

The self-incriminating recordings - plus all the documents that have been declassified in recent years - are incontrovertible evidence of Nixon being a deeply flawed, bigoted human being who did great damage to the nation he actually seemed to love. There is a stunning amount of first-hand information now available on this most controversial of Presidents, and the more you read the more darkly fascinating he becomes.

Oddly enough, the greatest single blow Nixon inflicted on the United States happened before he was elected president. Even conservative writer George Will admits that Nixon committed treason by conducting secret negotiations with South Vietnam while he was running for president against Hubert Humphrey in 1968. The candidate tasked Anna Chennault, his liaison to the South Vietnamese government, with persuading the South Vietnamese to refuse a cease-fire agreement then being brokered by President Lyndon Johnson. Her message was that Nixon was going to win, and that they should wait until he was elected. Nixon would cut them a better deal—one without the coalition government they so feared.

Nixon knew a cease-fire fire would probably mean a victory for Humphrey. LBJ had done a skillful job in pushing the very reluctant South Vietnamese to the brink of signing a pact at the Paris peace talks in October, 1968, but they backed out at the 11th hour. Philip Habib, a senior American diplomat at the peace table, thought a signed accord would’ve brought an end to the war, but he felt Nixon had gotten to the South Vietnamese. LBJ found out about it—it was captured on tape by the NSA—and was livid. He never revealed it to the nation though, unwilling to admit that the U.S. was spying on the South Vietnamese.

With the Vietnam conflict still raging, Nixon narrowly won the election on November 5,1968, but he had no workable peace solution. American troops continued to fight and die in Vietnam until March 29,1973, during which time another 23,000 of them would die, along with hundreds of thousands of Vietnamese and Cambodians. In April, 1975, North Vietnamese troops marched into Saigon and the war was over. The U.S. had lost, and the few remaining Americans, plus some lucky South Vietnamese, had to be rescued by helicopter.

Arriving in D.C. after his election, Nixon soon found he was persona non grata in Georgetown, the power center where the Washington in-crowd gathers at swank soirées. Socially awkward and prone to facial sweating, Nixon just didn't have the style to hang out with the likes of Washington Post Editor Ben Bradlee and columnist Joe Alsop at all the "cool" parties. Henry Kissinger, his Secretary of State, did possess that particular savoir faire, and the German foreign policy specialist was welcomed with open arms by the Georgetown set, often delighting them with his little digs against the President.

Nixon didn't get enough love as a child. He didn't have many friends either. The only real friend he had was wheeler-dealer real estate developer Charles "Bebe" Rebozo. What Nixon seemed to want from a friendship was a lot of silence. The two of them would sit together on Bebe's yacht and say nothing for long periods of time. Occasionally one of them would tell a dirty joke. Nixon thought this was how real men behaved, but it had a forced qualify to it, just like when he swore at the White House.

Even after being elected to the presidency twice, Nixon always felt like the perpetual outsider. He longed to create a separate "establishment" outside of the one in Georgetown—one that would be populated by those outside the East Coast elite. Prone to paranoia, he was obsessed with his "enemies," especially when Watergate broke and "bombing the bejesus" (as he put it to Kissinger) out of North Vietnam and Cambodia failed. Nixon created his infamous "enemies" list, with dangerous people like actor Paul Newman on it.

The press was Nixon’s enemy. He was convinced of this since he’d lost his 1962 gubernatorial bid in California. "You won't have Nixon to kick around anymore," he famously proclaimed at the time, his voice dripping with self-pity. He had Vice President Spiro Agnew make speeches attacking newspapers and television networks, and even sicced the IRS on journalists he disliked. It doesn't take a Sun Tzu to realize you don't win a war with the media, but brilliant foreign policy thinker Nixon couldn't grasp this. More likely, he knew it but just couldn't help himself. When he resigned from office in disgrace, claiming he no longer had a strong enough base of support in Congress, he certainly knew who had won that war.

When everything went south—his illegal bombing of Cambodia whipped war protestors into a frenzy and his Watergate cover-ups started to emerge—Nixon turned to alcohol for solace and sleep. This dereliction of duty by the commander-in-chief put his nation at risk. During the Arab-Israeli war of 1973, which was escalating toward a possible nuclear showdown between Washington and Moscow, UK Prime Minister Edward Heath tried get in touch with Nixon. When Henry Kissinger's assistant, Brent Scowcroft, informed Kissinger of this, the Secretary of State said, "Can we tell them no? When I talked to the president he was loaded." No.10 Downing Street was told the President wouldn't be available in the morning.

Nixon resigned from the Presidency on August 9, 1974. In a farewell speech given to his staff after his resignation—one of the great pieces of political theater in American history—he ended with this remarkable quote: "Always remember, others may hate you. Those who hate you don't win unless you hate them." With this, he then got on the helicopter and flew out of public life, at least temporarily.

The deep cynicism towards government that Nixon left is part of his legacy, as is the spectacularly expensive and disastrous war on drugs. Then there are all those deaths in Southeast Asia, and the lies and deceptions of the Watergate cover-up. David Frost gave Nixon a chance to apologize to the nation in a TV interview a few years later, but he was only willing to admit to letting people down. It was not a real apology. He still couldn’t do the right thing.