The Times columnist says Lee mustn’t be judged too harshly. 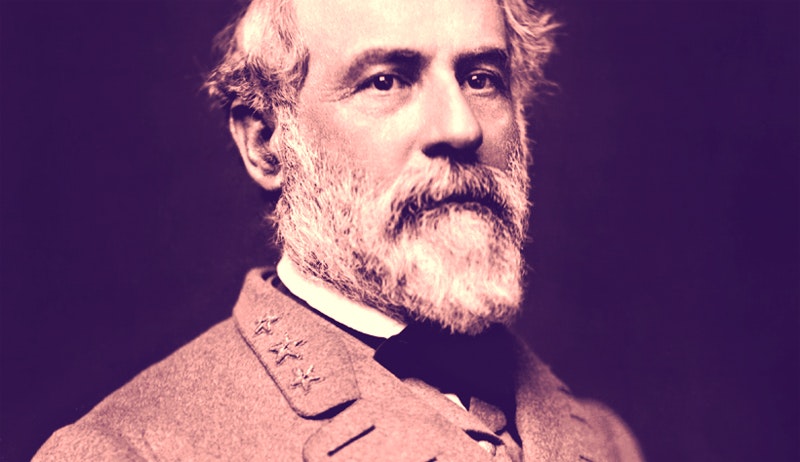 Let's imagine a man; call him Joe. On the one hand, Joe was a gifted watercolorist and his family loved him. On the other, Joe owned slaves and when the government tried to take them away from him, he led an army and butchered large numbers of people. Should we raise statues to Joe's memory and honor his watercolors and his skill in killing people in defense of slavery? Or, alternately, is that a stupid idea?

The person in question here is, of course, not "Joe," but Robert E. Lee. From his sinecure at The New York Times, David Brooks weighs the watercolors and the slavery, and furrows his brow. Yes, he admits, slavery is bad and its legacy is bad: "If we want to reduce racism we have to elevate the symbols that signify the struggle against racism and devalue the symbols that signify its acceptance." So, the Confederate flag should go.

But as for Lee, the most recognizable Confederate general—must his monuments go the way of the flag? Brooks isn't sure. After all, the man was just so nice. "It is almost impossible to imagine a finer and more considerate gentleman," Brooks insists. Lee was brave, courageous and kind to just about everyone who wasn't his slave. Also, watercolors.

Brooks goes on to say that yes, Lee was a traitor and a slaver. "Lee didn’t enjoy owning slaves, but he was considered a hard taskmaster and he did sell some, breaking up families," Brooks admits. Lee whipped people and indulged in vicious cruelty, but he didn't enjoy it as much as he could have. If that's not gentlemanly what is?

Brooks sounds like an idiot because his project is idiotic. Balancing the good and bad of Lee to determine whether or not he deserves a monument misses the main point. Lee doesn't have monuments because he was a decent watercolorist, or a decent man. You don't generally get a monument erected to you for being an okay person, or for writing "saucy letters" to women, even if your wife thinks those letters are funny. You get monuments because you’re a significant political and/or military and/or civic figure.

Statues to Robert E. honor him for being central to, and skillful at, the defense of slavery. Brooks' evaluation of Lee's personal character is utterly beside the point. Take the treason and the slavery-defending away from Robert E. Lee, and you've got a pleasant guy without any statues commemorating him. Brooks eventually winds down to a wishy-washy conclusion. "Given our history, it seems right to aggressively go the extra mile to show that prejudice is simply unacceptable, no matter how fine a person might otherwise be," he says, and recommends removing Lee's name from most monuments, roads, and schools. As so often with Brooks, the pose of thoughtful moderation opens on a logical and moral vacuity. Lee, the honorable man, does not exist somewhere purified of the Lee who pledged his life and talent to treason and slavery. And in fact, the only reason Lee's name is on so much crap is because he devoted his talents to treason and slavery. His statues show that America, for more than 150 years now, has been convinced that treason and slavery were pretty cool things to devote your life to.

Refusing to venerate Lee isn't going the extra mile. It's going the first step. There’s nothing to be said for Lee that would justify celebrating him in any way. Okay, he was a decent guy. His family liked him. You know what? There have been lots of decent people in this country over the years. Many of them didn't even own slaves.