My Dream About Marco Rubio 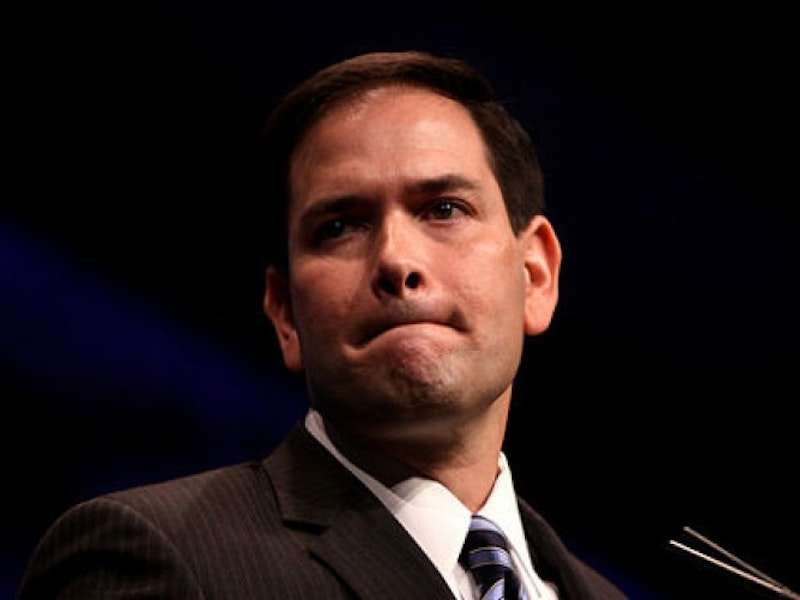 I woke up this morning with a sense of accomplishment. My main concern was that I, and not one of my colleagues, should get credit for a masterstroke of campaigning. But I have no colleagues and have nothing to do with campaigning. What happened was that I had a dream.

In the dream, I sat at my old place at my family's dinner table. Around me sat the gang of consultants that was going to elect some Republican bozo as president, possibly Jeb Bush. I was part of the team and doing okay. We were a crackerjack bunch and on our game, and I was keeping up.

One idea, the only one to stay with me, was a masterstroke. We had to take down the juggernaut known as Marco Rubio. Start a rumor, we decided. Something that would put a picture in people's head, something that would make him a joke. How about this—he shaves his balls and then lets the hair grow back. It's his habit, he likes it: not just the shaving, but also the growing back. Especially the growing back. He likes the way it feels.

Somebody took the idea to the next level. “Has Marco pubed yet?” a voice called out. That was the capper. We could see the phrase trending in social media, and who could ever trace it to the campaign? Nowadays it's no trick to get something rolling.

“You know,” I announced to the table, “I think we came up with the best action verb in campaign history.” I stand by that. I’ve never heard of any political campaign that came up with a verb as good as pubing (properly, to pube). For the record, pubing refers only to the hair growing back, not to the shaving of the hair. “Has Marco pubed yet?” is a question about whether the hair is back on Rubio's balls.

A few points. Urban Dictionary lists “to pube,” but that entry refers only to sprinkling pubic hairs on a victim; I have no interest in it. Second, “Has Marco pubed yet?” is a little hard to say. Using his last name might be more euphonious. But with this sort of dodge one wants to get up and close and personal, not to mention condescending. The idea is to take something intimate and make it poison.

Finally, and this important, I have no idea whether the Senator actually shaves his pubic hair and then lets it grow back. I kind of suspect that he doesn't. I’ll concede that he appears rather small and fine-boned for a senator, let alone a would-be president. He’s racked up some political mileage by being a winsome, eager-to-please cupcake. But these can't be considered reasons.

If the Senator does follow the described practice, I can't say whether it's really because he enjoys the sensation of the re-growing hairs. Perhaps there’s something stimulating about them, something that keeps him sharp, on his toes. But maybe he doesn't shave his genitals at all. That’s quite possible. The only thing we know is that he has yet to address the question. And I do get credit for that great verb, pubing. After all, it was my dream.