Bad manners and bad breath get you nowhere. 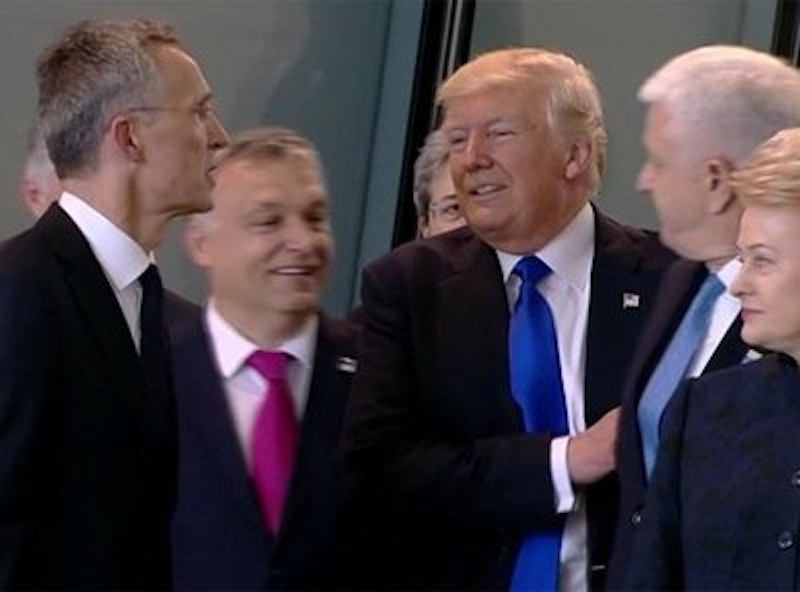 Political consultants and focus groups usually size up candidates for two qualities—connectivity and likability. They view voting as an emotional act, whether the voters know it or not, and how they respond to candidates is usually a measure of success on election day. President Trump is a puzzle. There is nothing to like about him. He’s a thoroughly spiteful, pugnacious and unnecessarily cruel person who doesn’t seem, behind his gilded carapace, to even like himself. This is the case with most demagogues and despots.

But Trump’s not a conventional politician. In fact, he’s not a politician at all. And that may be his biggest problem. John F. Kennedy was likable; Trump is not. Bill Clinton connected by feeling your pain; Trump feels nothing about anyone but himself. George W. Bush, despite his wealth and pedigreed name, was praised for his common touch. Barack Obama was characterized as a man with professorial distance whose head was in the clouds but whose feet never quite touched the ground. To illustrate the point, my own former boss, Maryland Gov. Marvin Mandel (D), even emblazoned the 1970 campaign theme, “People Like Governor Mandel,” on a half million shopping bags that were distributed to voters. (He’d never get away with that now. They were plastic bags.)

Trump is a moral Luddite, who’s boorish and appears lacking any socially redeemable qualities. He berates employees, forces them to lie, cheats on his charitable giving, screws contractors who work on his projects, bullies everyone around him and claims, as president, the “absolute right” to do whatever he chooses because it comes with the franchise. Seventy-five years ago, in the era of Dr. Spock’s pediatric influence, it might have been argued that Trump’s toilet training was too severe. He was, after all, shipped off to military school as an incorrigible youth. Consider these:

• Trump was accompanied on his recent overseas trip by his whipping-boy press secretary, Sean Spicer, whose dreams include an audience with the Pope. Trump’s pettiness was in full evidence when he deliberately excluded Spicer, a devout Catholic, from the list of family and aides that would accompany him into the papal sanctum. Even members of the press corps displayed sympathy and support for the humiliated Spicer in a flurry of Tweets.

Pope Francis made a plea to Trump to remain in the 190-nation Paris climate change agreement. As a memento of the visit, the Pope gave Trump a copy of his encyclical on the environment. But Trump left the Pope, Europe and the world to gag on America’s fossil-fuel toxins by pulling out of the accord in search of a better deal, as if it’s an apartment project in the Bronx. Trump will “make America great again” by abandoning its role in clean energy and climate change. Trump has aligned America with Syria and Nicaragua as the only three holdouts from the climate accord. In his heavily choreographed but rambling Rose Garden speech, Trump used the evocative phrase “New Deal” several times. Trump is no Franklin Delano Roosevelt. Blame Trump if America never achieves greenhood.

• Trump bowed and participated in an elaborate sword dance with his Saudi Arabian hosts after he once criticized President Obama for bowing before a foreign leader. In that backwater nation where the Islamic extremist Wahhabi rules apply, Trump boasted of doing billions in deals in armaments and munitions with the same nation that helped to finance the 9/11 conflagration in America and denies human rights and liberties to its people, especially women.

• Trump was loutish and in full-bully mode when he lectured America’s NATO allies on their obligations to the enduring partnership, but never more toxic than when at the Brussels meeting he failed to reaffirm America’s commitment to the joint defense agreement under Article 5—an attack on one is an attack on all. The French newspaper, Le Monde, said Trump “lectured them like children.” This prompted German Chancellor Angela Merkel, once back home, to remark that Europe has to start thinking about going it alone.

• Trump elbowed his way to the front of the crowd, pushing aside a Balkan prime minister when it came time for a group picture at the Brussels meeting.

• In Israel, Trump was welcomed by Prime Minister Benjamin Netanyahu, kind of a rabble-rousing soulmate. “What’s the protocol,” Trump asked on the arrival red carpet. “Who knows,” Netanyahu replied. “I think they’ll just tell us where to stand.”

• At his first meeting with newly elected French President Emmanuel Macron, Trump moved in aggressively to assert an Alpha-male handshake. Not to be outdone, Macron white-knuckled back with a manly grip to prove he won’t be pushed around by the likes of Trump or anyone else. Macron denounced Trump in a searing speech in Paris following Trump’s departure from the climate change accord and his snide put-down of Paris.

• At the G-7 meeting in Taormina, Sicily, other G-7 leaders strolled the streets of the craggy hillside town. Trump followed in a golf cart.

But back home at the White House, everything was perfect, or nearly perfect, in Trump’s fantasy world, except for the Russia thing and the “fake” news emanating from it. And there were omens of a staff shake-up and a reduced role for Spicer. Nonetheless, the always faithful, ever-beleaguered Spicer had the following to say at his first briefing upon returning from Europe without a papal blessing, almost as if there was a hint of pleading in his prose and tone: “We’ve never seen before at this point in a presidency such sweeping reassurance of American interests and the inauguration of a foreign policy strategy designed to bring back the world from growing dangers and perpetual disasters brought on by years of failed leadership.”

Trump’s first overseas outing could normally be written off as an “ugly American” story, except that in the 1950s novel the ugly American is the hero. Trouble is, Trump’s behavior abroad was no different than it is at home—kind of like he’s standing next to a port-o-pot at a construction site yelling at workers over a tardy schedule.

The worst of it is that Trump’s callow behavior and bad manners appear to be trickling down into the American culture and affecting our behavior toward each other and to our friends and allies. Or is it the other way around, the coarsening behavior and barroom bravado trickling up from us to the White House in a resonance that befuddles the world. It was Trump who, during campaign appearances, encouraged his supporters to beat up protesters and to send him the legal bill.

It often seems as if Trump’s entire body of knowledge can be expressed in 140 characters. Americans have to decide whether half an oaf is better than none.