So many people today talk and behave as if they’re elected officials. 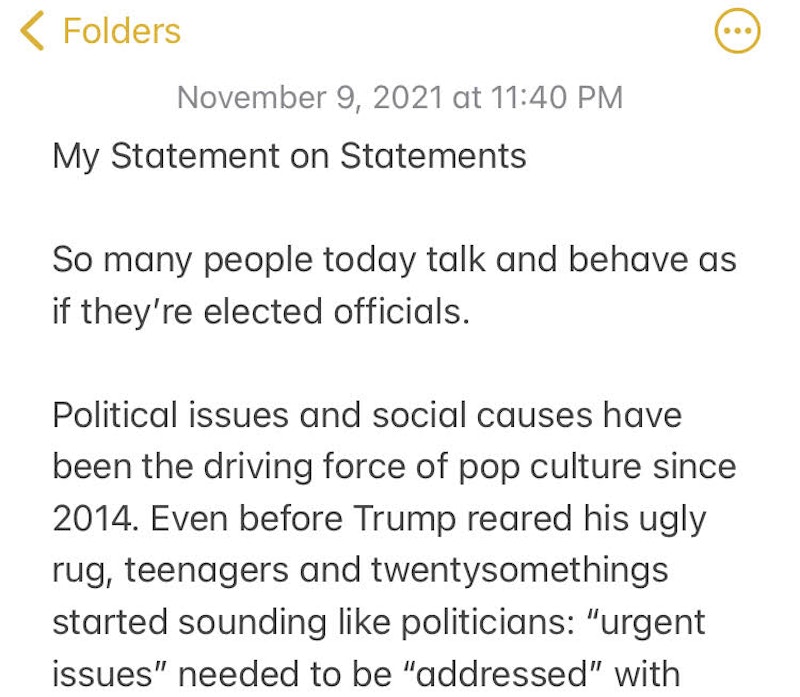 Political issues and social causes have been the driving force of pop culture since 2014. Even before Trump reared his ugly rug, teenagers and twentysomethings started sounding like politicians: “urgent issues” needed to be “addressed” with “statements.” I saw plenty of legitimate examples in the last six years, mostly rapists getting kicked out of bands and banned from clubs. “Cancelling” serial rapists, violent racists, and criminals is obvious and doesn’t need elaboration. But particularly in the last two years, people have started talking as if they’re elected officials.

These are statements that range from outing longtime sex offenders to denouncing anti-vaxxers to "heartfelt" and "devastated" sentiments about this or that tragedy or dead celebrity. Now, "as an American," it makes me nervous how quickly and easily people adopted the cadence, comportment, and self-censorship of politicians. This goes for sobriety announcements to the Instagram “Black Square” charade last summer that probably was the apogee of this particular phenomenon. Our social currency right now isn’t cool but righteousness and biological traits—how unfortunate.

Everyone’s permanently on notice and watch for anything they say that might come off “wrong”—what a perfect opportunity for vultures and vampires to come out and feast on the blood of cowards. That’s how you get charlatans like the organizer at Netflix that decried Dave Chapelle for being transphobic and bigoted while maintaining a public Twitter with plenty of racist and homophobic material for all to see.

At the same time, so many are eager to be radical and revolutionary without ever committing to anything serious—like risking your life, or thinking about political and social issues as more than lifestyle choices. This, from Michelle MiJung Kim, is just too rich: “Too many cishet people I’ve dated only understand my queerness through the reductive definition of being attracted to multiple genders, rather than as a daily struggle for liberators existence rooted in disrupting archaic norms, structures, and violence that is heteronormativity. By queering relationships, I don’t just mean that I exist as a queer person in whatever partnership arrangement I’m in. I also mean that I am actively and intentionally resisting heteronormative expectations and dynamics that force me to suffocate in different boxes.”

Goddamn. You’re the one with all the fucking boxes! I don’t want to take the bait. Up is down, you don’t have to be attracted to multiple genders to be queer, also I’m the President. To be fair, Kim is a CEO in Oakland, CA, so we must grade her statement on a curve. But there’s an audience for this, because if you say anything with enough confidence and conviction, you can trick a lot of people. It’s really easy, I do it constantly. But even after the Astroworld disaster, a horrible and banal tragedy with no meaning or lessons to learn that weren’t obvious after The Who played in Cincinnati in 1979. There’s nothing to learn from the death of a dozen kids at a concert, there is no “why” beyond a rapacious corporation like LiveNation overselling the show by double. It’s not a novel story, however tragic.

And then come the statements: mosh pits are racist, a bunch of privileged white kids did this, a bunch of Black kids did this, a bunch of Hispanic teenagers did this, Satan himself was involved. COME ON! It’s important to remember always that we do not have a President, and in the absence of a national figurehead, everyone’s acting like a surrogate—not necessarily for the Biden administration, but for “the good ones” in this country, whatever that phrase means to you. To get involved in a discussion about whether or not Astroworld was a Satanic sacrifice is to lose. There’s also nothing to be said besides LiveNation’s negligence, and as far as Travis Scott’s behavior goes, these things are complicated, if he stopped the show there could’ve been a rio—WAIT! I have to stop myself. Now I’m doing it. I’m “weighing in” on a story that I have nothing to say about.