Change is Just Around the Corner (Again)

Boston will soon see how overpromising works after electing Michelle Wu as mayor. 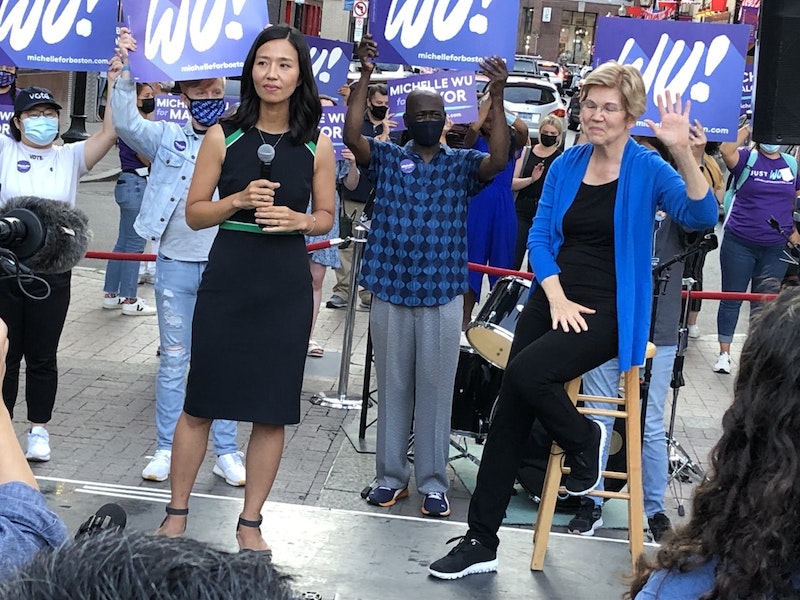 I watched U.S. Rep. Ayanna Pressley (D-MA) conduct a virtual town hall last week. It was boring. I’ve covered Pressley often, so I know what she thinks, the fringe and divisive statements. It’s not shocking anymore.

What has stood out, however, was the scaled-down version of the Pressley agenda that I’ve heard so much about over the past couple of years. Pressley doesn’t identify as a Democratic socialist. She doesn’t talk about capitalism versus socialism. She’s a member of “The Squad,” but isn’t as left-wing as Alexandria Ocasio-Cortez (D-NY), Rashida Tlaib (D-MI), Ilhan Omar (D-MN), and so on.

Yet, Pressley touted herself as a supporter of the Green New Deal and Medicare-for-All. Now, those initiatives are unsurprisingly going nowhere. During the town hall, those topics never came up. Pressley backed Sen. Elizabeth Warren (D-MA) in the presidential primary, breaking with the other members of “The Squad,” who supported Sen. Bernie Sanders (I-Vermont), who isn’t a registered Democrat.

On healthcare, Pressley didn’t mention Medicare-for-All during the town hall. Most of the Massachusetts congressional delegation doesn’t support the proposal and it’s more liberal than most states. A public option wasn’t part of the agenda either; that’s something that Barack Obama ran on nationally in 2008 and won.

Pressley spoke about the MOMMIES Act that she filed with Sen. Cory Booker (D-NJ). Her office says that the bill expands Medicaid coverage for mothers from two years to a full year after childbirth and that it expands access to certain kinds of healthcare—including postpartum care. Pressley doesn't use the term mothers when she speaks about it. She says "birthing people"—whatever the fuck that means.

Pressley wants to expand access to healthcare for low-income mothers. That’s not Medicare-for-all, or anything close to it. With a Democrat majority, maybe it’s feasible. It sounds more pragmatic than changing the health insurance policies of most people in the country. The scaling down of policies is also a reminder of what a sham the 2020 Massachusetts U.S. Senate Democratic primary was (between victor Sen. Ed Markey and former U.S. Rep. Joe Kennedy III). The two agreed on virtually everything, but they both made Medicare-for-all and the Green New Deal—especially the Green New Deal—the big issues.

Democrats in Congress now want a carbon tax that exempts gasoline—and Markey is supporting this agenda now. Bill Weld, the former Republican governor of Massachusetts, supports a carbon tax. With Biden as president, there’s no path for either of those two massive spending programs; he’d veto both of them and most members of Congress don’t support them.

However, even if Sanders or Warren were president, that wouldn’t change much because politically, there’s no path to get Medicare-for-All or the Green New Deal done. Certain politicians make big promises to motivate people to donate and vote. Markey and Kennedy know how Washington, D.C. works; they know members of Congress. Yet, they pretended they were going to be the people who went down to D.C. to get these things done.

And now Boston will soon see how overpromising works after electing Michelle Wu as mayor. She ran on making the MBTA free and supporting rent control. There’s no local option for communities to enact rent control in Massachusetts except for mobile homes. Wu stood out in the race because she was the only candidate running on those issues because the mayor can’t do them. It worked; she won a landslide victory in the general election.

Politicians should have real ideas when they run for office. They should run on what they believe and push for that agenda. However, both honesty and pragmatism have value. If politicians ran largely on what they support that’s possible to pass, maybe they’d tone down their rhetoric and there would be less division in the country. Calling opponents racists, RINOs or communists because they don’t support bills that’ll never pass isn’t helpful.