My Political Misogyny: A Confession 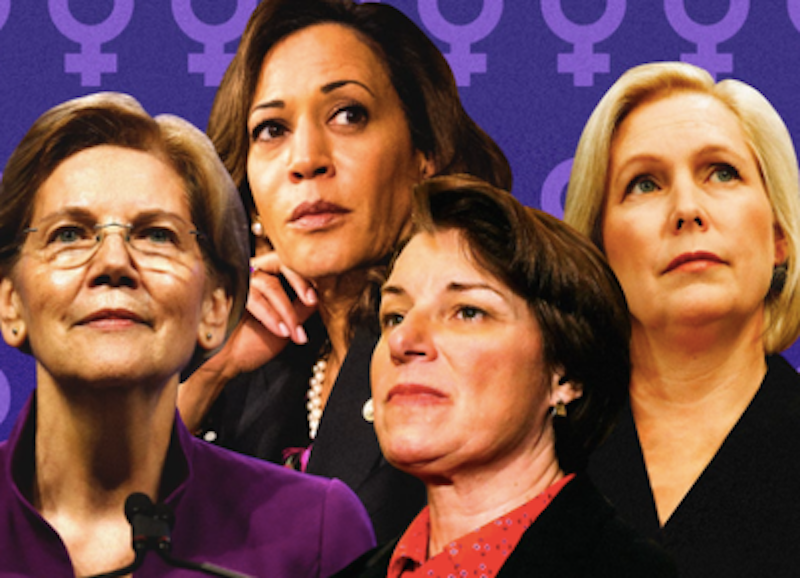 Few people think of themselves as bigots; people often react with bristling defensiveness to the accusation that they’re sexists, racists, or homophobes, and in general a prejudiced person is the last one to see his own prejudice clearly. This makes the attitudes hard to ameliorate, in oneself or anyone else.

As all the female candidates for president have disappeared (Tulsi Gabbard might be hanging in there), commentators have disagreed about the role of sexism. Some argue that Elizabeth Warren didn't make it because she's a woman running for president in a sexist society; some disagree. The pace at which all the women got eliminated makes one wonder, and I wouldn't say, looking back, that the female senators in the field­—Kirsten Gillibrand, Kamala Harris, Amy Klobuchar, and Warren ("the Quartet")—were less impressive overall than the men. People I know support a male candidate on the grounds that a woman is not “electable,” or “formidable” enough to take on Trump. I think sexism is in there.

One reason (and I hate to say this) is that my own response to the candidates had a sexist element. It's amazing how you can fail to realize stuff like that about yourself, or fail to see it clearly: sometimes you can overlook or repress the most obvious things if they're liable to damage your self-image. It was only as Warren withdrew and talked about the role of gender that I looked back on my own responses to the Quartet and semi-honestly wonder.

I recalled a few moments that even I knew revealed something about how I really react to and interpret female presidential candidates. These were visceral reactions, or words that ran across my mind, and not (usually) things I expressed aloud or wrote; I’m aware that I should try not to let such thoughts leak out into public space, lest people take me for an asshole and an oppressor. Not letting them leak is not the same thing as not having the attitudes, though. This is my confession.

As I watched each member of the Quartet pop up with their announcement and participate in the early debates, I found each of them—perhaps in slightly different ways—irritating. Grating. Not particularly “likable,” as I did not say, but more or less thought. They set me off somehow, pushed a button; I couldn't say exactly why. This was also true of Hillary Clinton in 2016: I just didn't like her (and didn't vote for her). One of the things I didn't say: she reminds me a little of my mother.

Now, talking to people around the water-cooler at various universities over these last many years, I would’ve of course said I’d be happy to have female president, and taken myself to be perfectly sincere. But I actually tweeted at some point that I couldn't deal with Kirsten Gillibrand's voice: too high-pitched and girlish to take seriously. I wanted Amy Klobuchar to seem friendlier and more inviting, more nurturing. I wanted her to give me a smile, and I didn't like her hairstyle. On the other hand, I wanted Kamala Harris to stop smiling and laughing so much and so "hysterically," as I formulated it to myself but never said aloud. Warren came off in those last few debates as so confrontational. Though I enjoyed what she was doing to Michael Bloomberg, the word 'bitch" floated across my consciousness, albeit with a bit of approval.

I also had thoughts like this: I think Pete Buttigieg’s the only one who really looks and talks like I’d expect a president to look and talk. But as various commentators after Warren's withdrawal set out their reasons for thinking that sexism was in play this primary season, it was hard not to become that I have many of the attitudes they identified.

I'm 61; I was raised in a society with gender prejudices and I’ve tried to become aware of and change my own attitudes since, let's say, 1985. The “becoming aware” part is difficult: I have a strong motivation not to become aware, even in cases where it’s obvious. I want to hold on to an image of myself as a good person. But holding on to an image of myself as a good person like this is incompatible with actually becoming a good person. This is the structure, too, of "unconscious" racism or homophobia, neither of which I’m absolving myself. It’s unconscious even when it’s obvious because becoming conscious of it would threaten the self-image of the unconscious bigot. This is one thing that makes these sorts of prejudices so hard to ameliorate. Everyone's first priority is to deny that they have any.

It's not as though a lot of male politicians don't annoy me. I attacked and ridiculed Al Gore relentlessly. John Kerry, too. I’ve directed a constant stream of abuse at Joe Biden. Cory Booker grates on my nerves, and Jay Inslee, okay? I'm definitely not a sexist, I explicitly say to myself as I stroll down the road of this internal monologue.

Yes, and yet. It took me awhile to really despise Al Gore, but I had an instant, apparently involuntary response of irritation to each of these four women. If it had been four different women… well I'm not sure. But the autonomic, reflex response is just the sort of thing in which bigotry consists. To do anything about it, I'll have to stop trusting my own reflexes, my apparently immediate impressions. Not the easiest thing for a person like me.

Someone said to me recently that they think a lot of men and even some women have trouble with the idea specifically of a woman president: they can acknowledge women in a variety of roles, but have trouble with the idea of a woman having power over them, or over the world. I'm not sure whether I have a particular problem with that myself. That I'm not sure is a bad sign.

It has disappointed me to realize, again and again over decades, that my own prejudices, somehow conveyed to me as a child despite my parents' own “enlightened” attitudes relative to the 1960s and 70s, are cemented in my head; it's taken me a whole life to dig through them or bring them to consciousness. I have a lot of motives not to. People like me, first, draw many advantages from structural and unconscious prejudice (start with being the beneficiaries of women's "emotional" and also physical labor, nurturing, approval, body services). And second, as I say, to see one's own prejudices is to confront the fact that one isn't as good a person as one took oneself to be, which is liable to make one unhappy.

If it's any comfort to you, or me, it did strike me by the time she withdrew that Warren, among the candidates in the field, would probably make the best president. It also struck me by the time Warren withdrew that I still have a long way to go in treatment of my own attitudes. I don't have another few decades, though.