Is it cognitive decline or related to his recently revealed stuttering problem? 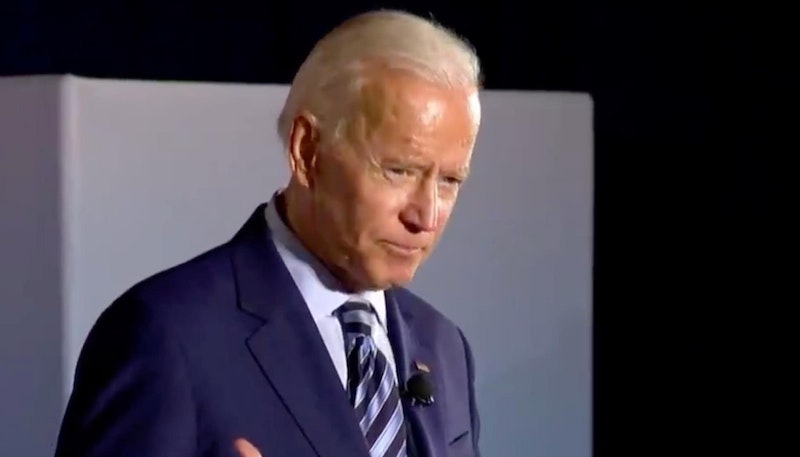 "We can only re-elect Donald Trump." Joe Biden said that in Missouri on Saturday, and the Internet was abuzz. Donald Trump loved the "endorsement." Naturally, he tweeted his agreement. Everyone had a good laugh at Sleepy Joe's expense, but they had no idea that they'd only heard the conditional clause of the candidate's sentence, which concluded with, "if we get engaged in this circular firing squad here." He'd made no mistake, but the truncated video that both the Trump and Sanders camps have been circulating told another story.

I also got fooled at first. Biden's gaffe-o-meter's regularly on tilt, which is why so many others got duped. The takeaway from these short attack clips is to always find out what precedes and what follows the selected words. But any decent propagandist knows that's not a realistic expectation because humans are wired to fall for this sort of trickery, especially when partisan politics are involved.

White House social media director Dan Scavino posted the clip on Twitter, and then Trump retweeted it to his 73 million followers, who retweeted it tens of thousands of times. Scavino won't be circulating any clips of Trump mangling the language, but plenty of them are around. The President has said that people sacrifice for "the furniture" of their children, and has talked about looking into "the oranges" of an investigation. You don't often hear people in good health make such mistakes. And then there's his 2019 Fourth of July speech when he talked about the army taking over the airports during the Revolutionary War.

Trump often struggles to find words, a condition Barack Obama's former doctor, David Scheiner, speculates could be caused by mini-strokes. Sometimes he's unable to pronounce common words even if he can recall them. Younger people don’t struggle with the language like he does.

Biden provides good content for faux pas highlight reels. He told South Carolina voters he’s a Democratic candidate for the “United States Senate” and then said if you don’t vote for him “vote for the other Biden.” He's also said he'd appoint a black woman to the U.S. Senate. Trying to reference the Declaration of Independence, he said, "We hold these truths to be self evident. All men and women created by...go...you know you know the thing." During the previous Democratic debate Biden said that 150 million Americans have been killed by guns since 2007, which would’ve been nearly half of the nation's population. He never corrected himself. Biden's most hilarious flub was back in 2015 when, during a speech, he appeared to give a shoutout to "an old butt buddy." How do you explain that?

Biden has had to overcome a stuttering problem, but it's still there in the background, like a bum leg that's mostly healed except for the slightest trace of a limp. You can't assess his speech problems without taking this under consideration, but people are doing it anyway. Those with stuttering problems often have trouble with word recall, especially while talking under pressure. It has nothing to do with cognitive or intellectual ability.

Stutterers' bodies don’t work in concert with their minds. Reading out loud is something they dread. When stutterers realize there's a syllable coming that will cause a blockage, they need to rephrase the sentence on the fly by switching to an alternative word, a difficult feat that can produce botched syntax. This requires a lot of energy, and when a stutterer is weary from campaigning, they're less able to do all the "manual overrides" necessary to produce smooth speech.

The speech issue presents challenges moving forward for Biden. He cleaned up on Super Tuesday without doing much campaigning or spending on ads, so Bernie Sanders has a monumental task in defeating him. The problem is that Sanders’ people, desperate now, are seizing on Biden's gaffe issue and even suggesting he has dementia. Trump must love seeing such reckless charges made within the opposition party.

Biden's stutter clouds the matter of determining his cognitive health. He could go on TV and talk about the challenges he's overcome, but is probably afraid that’ll make him look vulnerable. The Democrats are obsessing over the pathological "electability" issue, and this is a complication even though he's had the same verbal problems for decades. When I see Biden do interviews on TV, he speaks fluently, which makes me think his difficulties are related to stress and fatigue.

If Biden makes it to the general election we might see something like what happened in the 2000 election when reporters decided that Al Gore was a liar and George W. Bush was dumb. Consequently, they didn't really hold GWB to the facts, but parsed Gore's every word in search of dishonesty. If a similar pattern forms around Biden and his mental fitness, he could face similar unbalanced scrutiny. Perhaps he'll need a helping hand from Mike Bloomberg, who likes running ads showing Trump bumbling with the language.