They haven't been fun to witness. But they’ve helped winnow the field, and that's all they were supposed to do. 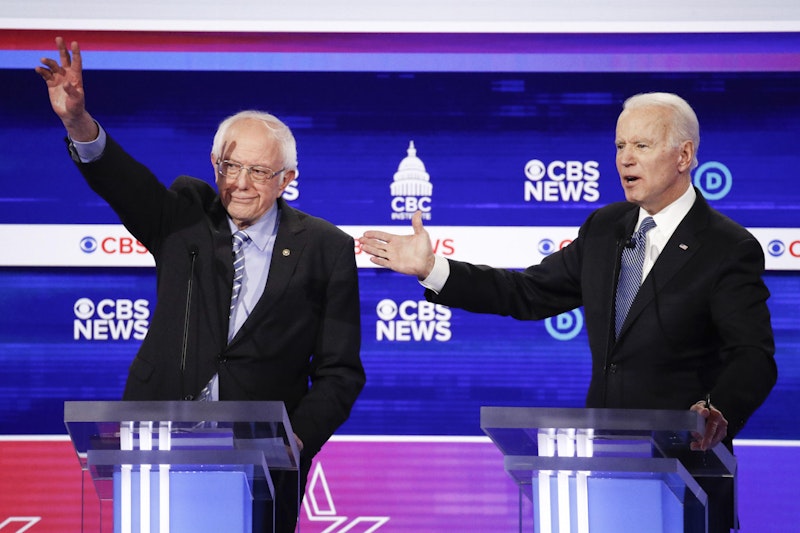 The Democratic debate on March 15 will feature just two candidates—Joe Biden and Bernie Sanders. Like many of the debates so far, it’s likely to be painful to watch. Both Biden and Sanders tend to bellow their answers in a narrow dynamic range. They become defensive and irritated when attacked. We’ll probably be treated to the spectacle of two impatient septuagenarian men peevishly interrupting each other for two hours.

No matter how miserable that sounds, though, the fact remains that the Democratic debates have basically accomplished what they were intended to. They haven't been fun to witness. But they’ve helped winnow the field to two experienced candidates. And that's all they were supposed to do.

When the first debates were held last year, they included 20 candidates—so many that they had to be held in two rounds. Over time, the DNC qualifications required higher poll numbers and more donors, and the field thinned. The process was crude and the results somewhat random. Unqualified self-help anti-vaxxer Marianne Williamson and on-paper-very-electable New Jersey Sen. Cory Booker alike found their campaigns starved of media coverage when they couldn't qualify for debates. But fewer people clustered onto the stage. The goal of the debates was to shrink the field so the Democrats wouldn't be stuck with a divided party unable to unify.

The DNC also was smart not to staple itself to its own rules. Multibillionaire Michael Bloomberg largely self-funded his campaign, so he wasn't able to reach the donor threshold to attend the Nevada debate. But the DNC didn't want him to face the voters on the strength of his $500 billion advertising blizzard alone, without giving his opponents a chance to grill him on his racist policing policies, or his history of silencing sexual harassment accusations against him with NDAs. So the Democrats tossed out the donor requirement to ensure Bloomberg could participate. Elizabeth Warren sliced him open, his poll numbers dived, and his efforts to buy the election were terminated.

Similarly, for this last debate, the Democratic convention changed the rules so that Tulsi Gabbard can't qualify after winning just one delegate. Gabbard has hardly any supporters and almost none of them are Democrats. She appeals mostly to Trump supporters who she's courted by refusing to vote for impeachment and by being awful. Debates aren't a fun reality show; they're not a game where the point is the rules. The point is to help Democrats select a presidential nominee. Gabbard has no path to that nomination, and no interest in helping the Democrats defeat Trump. She has no business on stage, and so the DNC has rightfully pushed her off of it.

And Biden and Sanders will have the debate to themselves. Sanders will make a last-ditch attempt to halt Biden's momentum and scramble back into the lead he lost after Super Tuesday. Biden will try not to make up any more stories about being arrested while visiting Nelson Mandela. With only two people on camera, they'll be able to go into much more detail on their proposals, and draw sharper contrasts. Democrats already know them quite well, but more information is always appreciated.