The Kentucky teenager’s defamation lawsuit settlement with The Washington Post was, predictably, largely ignored by the media. 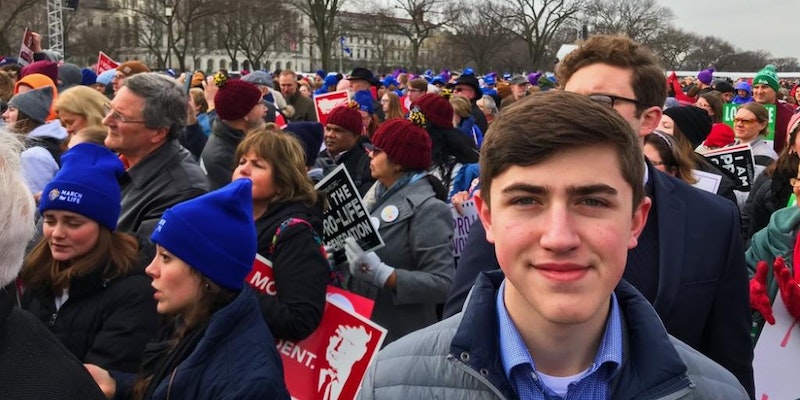 Last week’s settlement of a $250 million defamation suit against The Washington Post filed by the parents of 18-year-old Nicholas Sandmann—the “MAGA kid” who was featured in videos in January of 2019 smiling at Native-American Nathan Phillips at twin demonstrations near the Jefferson Memorial—is a far more important media/political story than what was reported last week. (Usually, the media loves to talk about itself; in this case, no one looked good.)

It’s of no real consequence what the undisclosed settlement figure was—except to lawyers on both sides and the Sandmann family; a similar suit against CNN was concluded this past January, the terms also kept private—but rather that the Post settled at all. In the current #cancel climate, in which journalistic and literary luminaries (some real, some imagined) coming forward with declarations on threats to free speech in America, one might reasonably expect some mainstream media commentator to dissect the ramifications of the Sandmann case. But this isn’t a “reasonable” media era and all those concerned about the fate of, say, former New York Times columnist Bari Weiss, and New York’s Andrew Sullivan, would rather forget that young Sandmann even exists.

I give The Post’s Paul Farhi—and his editors—credit for running a lengthy story on the lawsuit, one that although biased in favor of the newspaper, at least made the effort to include both sides. The Times’ story was perfunctory, tucked away in the back pages; although the reporter noted the Times has also been sued, unlike the Post it omitted the important fact that ABC, Gannett, CBS and Rolling Stone are also named in separate lawsuits. The Post’s editor Marty Baron declined comment, but a Post publicity spokeswoman said the paper was “pleased… to reach a mutually agreeable resolution.” That’s public relations doublespeak, but par for the course.

Farhi also wrote, after noting the Post had run seven stories and multiple tweets in the immediate aftermath of the ruckus, that “Initial news accounts, including The Post’s, relied on eyewitnesses such as Phillips and a limited number of videos posted on social media.”

I thought the key paragraph in Farhi’s story was this: “News organizations sometimes settle defamation claims rather than face a trial. Even with a favorable judgment at trial, the cost of defending against such a suit can be substantial.”

It’s just speculation about the dollar amount that the Sandmanns received—maybe a million, maybe $500,000; less than that and it’s very likely the defendant’s formidable attorney wouldn’t have settled—but I think it’s more than just the “cost” of battling a lawsuit that drove the Post and CNN to wipe this controversy off their blotters. First, both entities aren’t insubstantial organizations and if their lawyers believed it was nuisance lawsuit, they’d have gone ahead. (It wasn’t similar to when the influential Gawker group of websites went out of business by defending a defamation suit financed by deep-pocketed Peter Thiel.)

It’s far more likely that the Post and CNN—and the other media groups sued—wanted to avoid a trial that would put Donald Trump and his political agenda in the news (Sandmann and his Covington High School classmates attended an anti-abortion rally.) Trump was, unsurprisingly, a clumsy cheerleader for young Sandmann. The likelihood of possible other skeletons that would’ve been revealed in discovery at a trial was undoubtedly a factor. Had the trials gone ahead it’s doubtful they’d have occurred before November’s election, but that’s small picture: whether or not Trump wins or loses to Joe Biden, the left vs. right divide won’t suddenly disappear on Nov. 3rd.

Nicholas Sandmann’s a potent symbol (or perhaps a pawn) in the country’s political polarization, a stand-in for Trumpism, and the enterprises that were sued all lean to the left and know that the 2022 midterm elections and 2024 presidential election will be contested immediately after November, probably without even a Thanksgiving break. I also wonder what Sandmann’s (he graduated with honors this spring and reportedly will attend Tulane University on a scholarship) plans are in the wake of his two victories: will he go on to become a right-wing spokesman (much like David Hogg has for the left) or attempt to become a hermit. I remember seeing a video clip of him on NBC’s Today several days after the incident, cleaned-up and buttoned-down, obviously coached by lawyers, and he wasn’t particularly articulate or forceful. Then again he was 16, probably scared about the death threats he and his family were receiving, so who knows. Not every teen can be as charismatic as Greta Thunberg.

Sandmann did toast himself last week, tweeting: “The fight isn’t over. 2 down, 6 to go.”

There was one vitriolic column from the right-wing Stream website that I saw after Sandmann’s lawsuit win. The writer, John Zmirak, said: “I heard in my head the media headline that never ran. Thanks be to God. ‘Racist Ringleader, Nicholas Sandmann, Dead at 17.’ That’s what the media mob wanted. They as good as admitted it. When powerful reporters call a young man’s face ‘the most punchable’ in America, that’s what they mean… I read at least a dozen columnists expatiate on [Sandmann’s] smile, comparing [him] to settlers who slaughtered Indians, or concentration camp guards…”

Zmirak amps up the volume, after suggesting Sandmann move “somewhere sane, like Poland” and “maybe” start a Catholic college there. Then: “[Leftists] can’t forgive [Sandmann’s] innocence, his victory, or his smile. They’re coming for him. They’re coming for me. And then you’ll they’ll come for you and your kids.”

That’s the level of discourse in the media today. I think Zmirak is nuts, but it would’ve been instructive had any of The Stream’s commentator’s political opponents seen fit to write about what’s now two defamation lawsuits settled against left-wing media organizations.