Mexican Government Thinks of U.S. as Extension of Its Workplace

While Trump and Clinton debate wall or amnesty. 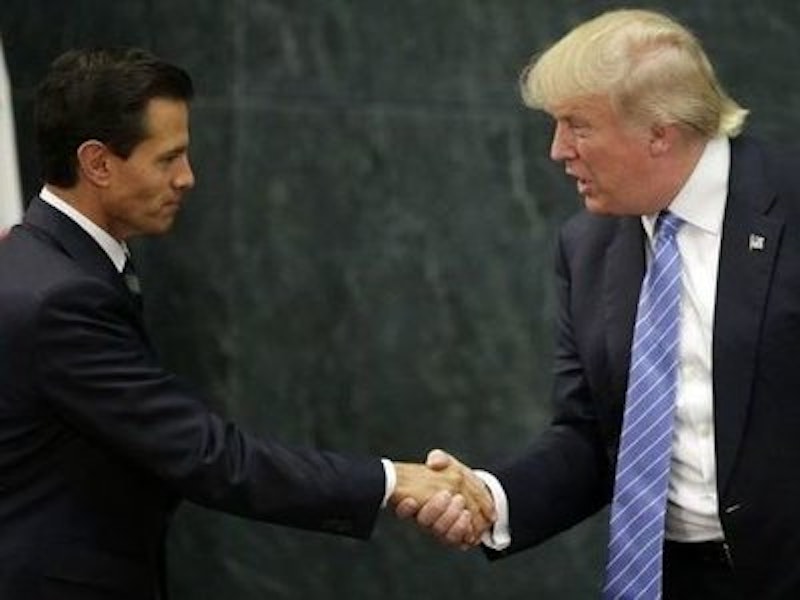 Pepe can still cut grass and hang drywall and Lupe can still make beds and pick crab meat. But legal or illegal, they’ll have to be careful and stay at their own risk. Donald Trump will be watching. To accomplish the massive roundup and deportation of undocumented immigrants Trump proclaims, the caravan of buses would have to stretch from the Mexican to the Canadian border and then some, because, as Trump sees it, nobody really knows how many illegal immigrants there are in America. He’s probably right.

And that’s the point. Most of the newly arrived scheduled for Trump’s dragnet are here, settled, contributing workers and members of communities. Drive across Baltimore’s Eastern Ave. through Fells Point and the lyrical sounds of Greek and Polish have surrendered to Salsa-spiced Spanish in its many derivations, known colloquially as Spanglish. Take the MARC train over to Washington and you’re in the middle of the fastest-growing Hispanic population in the region, much of it in uppity Montgomery County which was originally zoned to keep outsiders out. In Gaithersburg, city officials built an employment center for immigrants, legal or illegal, no questions asked. Maryland long ago passed its Dream Act, allowing full participation of children of illegal immigrants in the state’s educational system.

Over-the-fence immigrants in fast-changing Northern Virginia may soon number those in Maryland. But life is not always sunny-side-up. In Herndon, VA, lawmakers who supported the designation of a central gathering place for Hispanics seeking employment were defeated in local elections a while back. And in the Washington metro area, there have been barbaric murders and mutilations connected directly to the violent El Salvadorian MS-13 gangs. (MS-13 had also staked a strong gang presence in Baltimore City, Prince George’s, Montgomery and Harford Counties in Maryland.) This represents an idea of the group that Trump has identified for speedy deportation—“My first day in office those people are gone.” There are 690,000 illegals in the U.S. that have committed serious crimes, according to the Migration Policy Institute. Another organization pegs the figure at two million. Trump, though, has targeted fully six million illegals for immediate expulsion, which includes those who’ve overstayed their visas. That’s better than half the 11 million undocumented aliens estimated to be in the country.

While Trump criticizes President Barack Obama (and Hillary Clinton) for their accommodating immigration policies, he fails to mention that the Obama Administration has deported more undesirable illegals than any previous administration, as many as 289,000 a year. But from the Olympian perch of the White House, Obama has been determined to clear a pathway toward earned citizenship for those who are in America illegally if they meet certain conditions. He has held harmless, by executive order, the children of undocumented immigrants, though that action has been rebuffed by the courts. Clinton pursues much the same polices.

Trump’s battle cry is his solemn pledge to partition off Mexico at that country’s expense. During his surprise visit last week to the nation of his wrath, Trump became entangled in cross-talk about the 2000-mile wall he proposes. From south of the border, Mexico’s president, Enrique Pena Nieto, whose unfavorable ratings register even higher than Trump’s, assured Trump that Mexico will not foot the bill for the project, by some estimates $25 billion. If Trump sounded conciliatory, even statesmanlike, during his joint appearance with Nieto in Mexico, he left no doubt that he was steadfast in his views during a speech later that day in Phoenix, AZ. There, he repeated his hard-line approach toward illegal immigrants with a 10-point crackdown plan and lost any goodwill he might have gained from his visit and appearance on a world stage with Nieto.

The Mexican president has a point in defending cross-border migration, legal and illegal. The money Latino workers send home to their families is among Mexico’s largest sources of revenue. At last count, Mexican workers in America money-order home $23 billion a year, dollars that are not re-circulated in this country. That cash is part of the $120 billion a year that foreign workers in America send back to their native countries, with China, India and the Philippines the largest recipients, followed by Mexico.

There’s racial backlash occurring as well. In Los Angeles, civil rights activists earlier had joined with the Minutemen to help block illegal entry by Hispanics across America’s borders. They claim that illegal immigrants are infringing upon entitlements that rightfully belong to blacks. Besides, they claim, the civil rights franchise belongs to blacks and not to foreign interlopers. In another fringe departure, the New Black Panthers have set as a goal the fencing off of five southern states—Louisiana, Mississippi, South Carolina, Alabama and Georgia—as the exclusive preserve of blacks, “our own government in a nation within a nation.” The Black Panthers hope to form their nation by encouraging blacks to trans-migrate back to the south to accomplish the announced take-over.

And it’s a miracle of democracy when hundreds of thousands of people who are in America illegally would take to the streets of the nation’s capital and other major cities to demand the same inalienable rights that come with Americans’ birthright. Maryland, after all, is where former Gov. Robert Ehrlich Jr., Republican, once dismissed multiculturalism as “bunk” and “crap.” The word itself has fallen out of use, along with “quota,” and both have been replaced by the more benign “diversity.” The new wave of immigrants has been proclaimed as a way to repopulate Baltimore after years of a declining population that is finally beginning to stabilize.

According to the latest census figures, Maryland has a total population of 6.006 million—64 percent white, 27.9 percent black, and 4.3 percent Latino. Another set of figures puts Maryland’s Latino population at six percent. Take your pick. In the Washington Metro area, the wealthiest concentration of Latinos in America, there are an estimated 807,000 Hispanics, and in Virginia alone there are 394,856 Latinos. The Maryland Hispanic population is 557,371. Most Hispanics in the Washington region are from El Salvador, Mexico, Puerto Rico and Guatemala. In Baltimore City, the Hispanic population is a fractional four percent, while blacks make up 64.3 percent and whites 31.6 percent. On the polyglot East side of Baltimore alone, there are at least a couple dozen languages romancing the neighborhood on any given day. The largest populations of Hispanics are in California, New York and Texas.

While Trump and Clinton debate whether to build fences or grant what amounts to an open-arms forgiveness, to one degree or another, the Mexican government considers the United States essentially an extension of its workplace while extremists even make territorial claims on parts of the U.S., i.e., Texas and California, as native Mexican turf based on occupations and wars of a couple centuries ago.

Unlike the previous waves of immigrants who came to America legally, the newly arrived, whether over the fence or through an airport or port of entry, are no longer inclined to assimilation but are more satisfied with living within a blocked-off ethnic mosaic and preserving their own cultures. Earlier immigrants, for good or ill, were hell-bent toward Americanization and blending in, if for no other reason than survival against the unwelcoming bigotries of the era. Nor a century ago when the stream of Irish, Italian, German and Jewish immigrants arrived in the forbidding new land was there a social welfare support system, private or public, to provide sustenance and care, though illegals are not entitled to direct government benefits. Immigrants have never had it so good. And that’s a good reason for wanting to stay.