The ACLU and other marriage rights organizations need to stop pandering towards the middle and acknowledge the queer community. 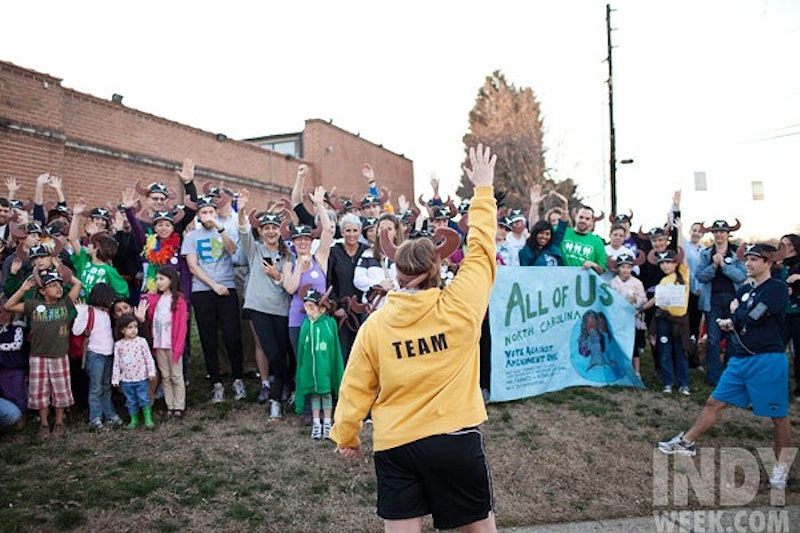 Recently, a friend who was organizing a benefit party for Protect NC Families, an organization working to defeat North Carolina’s anti-gay Amendment One, called me. She said that she wanted to have a tipping booth at the party and asked if I would be willing to man it. Sure, I said. I wasn’t quite sure what a tipping booth was, but I pictured myself carrying around a gold jar full of cash donations. I was later informed that my hearing is awful and what I actually agreed to do was a kissing booth, not a tipping booth. This took more thought. Was I willing to risk mouth herpes for a good cause? Not really. And besides, what kind of people pay to kiss someone on Saturday night at a bar? Drunk people, and I’m almost 30.

I’ve kissed enough drunk people. We decided instead to do a compliment and advice-dispensing booth, which would be more helpful and less contagious. My friend Camille joined me in the booth, which was partitioned off with a red velvet drape so it looked like we were telling fortunes or reading Tarot cards, and we made over $100 in tips, which put the total over $4000, all of it going to Protect NC Families.

In the midst of dispensing compliments and advice (What a beautiful neckline: you should always wear v-necks; it doesn’t matter if his girlfriend sucks: don’t make out with him until he dumps her; you found your dream job but it means a pay cut? Get food stamps.), a queer woman entered the booth with a concern: a representative from Protect NC Families had just spoken and he didn’t mention gay people at all. Instead, he talked about how Amendment One would affect all unmarried couples. And this is true. Amendment One would, according to the ACLU, “take away the ability of committed couples to take care of one another when making medical, financial, and other important life decisions.” All unmarried couples, gay and straight alike, could potentially lose the right to adopt their partner’s kid, make end-of-life decisions, etc. It’s awful. But the woman who approached us was pissed because that’s all they talked about—how this is going to affect families—not the fact that this issue only exists because of homophobia.

Lots of organizations are using this tactic. ACLU mailers don’t show gay couples: they show pictures of heterosexual couples with babies and without wedding rings. A friend of mine is making promotional films for another national organization working to defeat the amendment, and after he interviewed a lesbian couple who has been together for 50 years, his boss told him to edit out all references to their sexuality. This is politics and I get it. These groups are appealing to the middle, to the people who might not advocate for gays but don’t want to see the rights of unmarried straight people curtailed. But it feels like our concerns are being neglected, and unnecessarily so. The people who are going to vote against this amendment are our allies. They would still be here, drinking and dancing and paying for compliments even if this amendment solely disenfranchised the gays.

The congressmen who introduced this bill and the people who vote for it may think that you, your mate, and your bastard child are going to spend eternity in Hell with the homosexuals and the Jews, but you are not the real target of their hatred or their legislation. I speak for all gays when I say that we sincerely appreciate the thought, work, and money that so many people have put into this, but the ACLU, Protect NC Families, and the other organizations fighting against this amendment need to acknowledge those of us who do not have the option to marry if the bigots on the right and in the government win. Straight people may be affected by this, but they will be able to work around it if they must. It’s not about you. It’s about us, and it’s time to start listening. That’s my advice. Tip jar to your right.