Times columnist guarantees no Trump nomination, but can’t explain why. 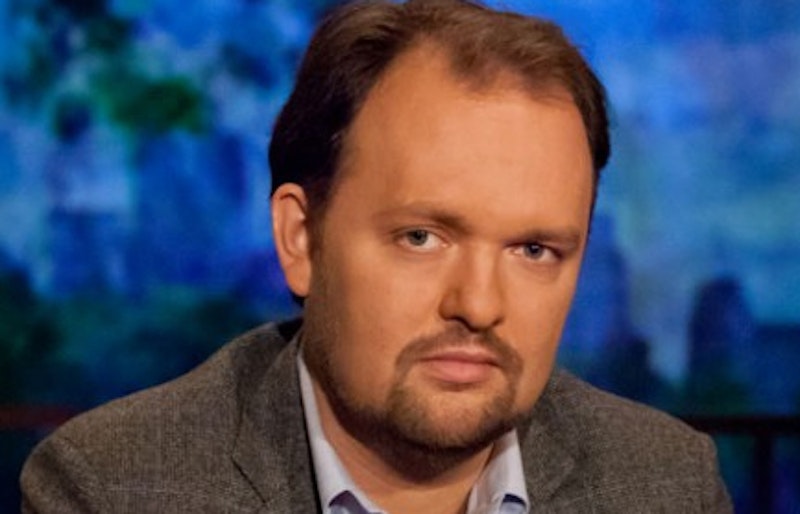 It’s just an educated guess, for I don’t know the man, but it’s unlikely that putative conservative New York Times op-ed columnist Ross Douthat mixes bourbon with Ambien. (No one’s yet matched the late William Safire for the Times conservative slot, though Douthat is certainly preferable to his mealy-mouthed confederate David Brooks.) He’s too measured for that sort of rambunctious behavior, although if he takes the time to read colleague Paul Krugman’s semi-weekly economic diarrhea, Douthat might soon recommend an in-house intervention. It would dovetail with the 36-year-old’s Catholicism.

So, barring the possibility that Douthat was out of his head on an Internet-ordered substance while writing his Sunday column, what does a reader make of his muddled thoughts? He writes: “For the first time in a generation, the theme of this year was the liberal order’s vulnerability, not its resilience.” As proof, he catalogs a tumultuous year in Europe—particularly Angela Merkel’s hasty decision to open Germany’s borders to all refugees (since dialed back)—and does get off this beaut: “And in Sweden, that blessed end-of-history paradise, the most popular political party was suddenly the Sweden Democrats, whose roots are in homegrown fascism.”

But on the topic of domestic politics, Douthat can’t make up his mind. He says, correctly, that Donald Trump was the story of the year, overshadowing the “continued potency of Black Lives Matter, the turmoil on college campuses, and the appeal of an avowed socialism on the Democratic Party’s campaign trail.” Like millions of other people, I found the attacks on the First Amendment (as well as “safe spaces” and “trigger warnings”) at academic institutions really weird, but let’s be honest: was there a Mark Rudd as a spokesman, wholesale destruction of college traditions—as happened in 1968-70 or so—or marches in D.C. with 500,000 participants?

Apparently, Douthat realized this mid-column and went the “on the other hand…” route. He backtracks, saying, “Now: Trump will not be the Republican nominee (yes, really). Bernie Sanders won’t beat Hillary. Far-left antics at Amherst and Oberlin and Claremont McKenna and Yale are not as significant as elite college graduates like to think.” He doesn’t pour water on Black Lives Matter, but my bet is he didn’t want to be the object of a small but angry mob in front of the Times’ Washington headquarters.

So Douthat writes authoritatively that Trump won’t be the GOP nominee. How does he know that (and I don’t think the Bible told him so)? Either he’s in denial—a Trump/Clinton election is too far outside his “comfort zone” to even contemplate—or he’s adhering to Beltway cognoscenti groupthink, which now concedes that though Trump usually leads the poll of the day, either nationally or at the state level, it’s unlikely he has the “ground game” to pull off victories in Iowa and New Hampshire. And if that occurs, he’d be finished. Sure, that could happen. But what puzzles me is how any political writer who’s followed the campaigns since last summer can at this point dismiss Trump so breezily. Unless Douthat is temporarily living in Iowa in advance of the February 1st caucuses, how can he possibly know that Trump (or his minions) hasn’t spent a lot of money aiming to persuade caucus participants to vote for him? And if Douthat is so sure Trump won’t be the nominee, why not suggest who will give the acceptance speech at the GOP convention next summer?

Maybe he realized this, and so for a conclusion, did a triple back-flip, writing: “It’s still wise to bet on the current order, in other words, and against its enemies and would-be saboteurs. But after liberalism’s year of living dangerously, for the first time in a long time it might make sense to hedge that bet.”

And if you can “make sense” out of Douthat’s confusion—he should’ve skipped his column on Sunday, like other Times columnists—do enlighten me, for I don’t know what the heck he’s thinking.