I Swear by Ryan’s Beard 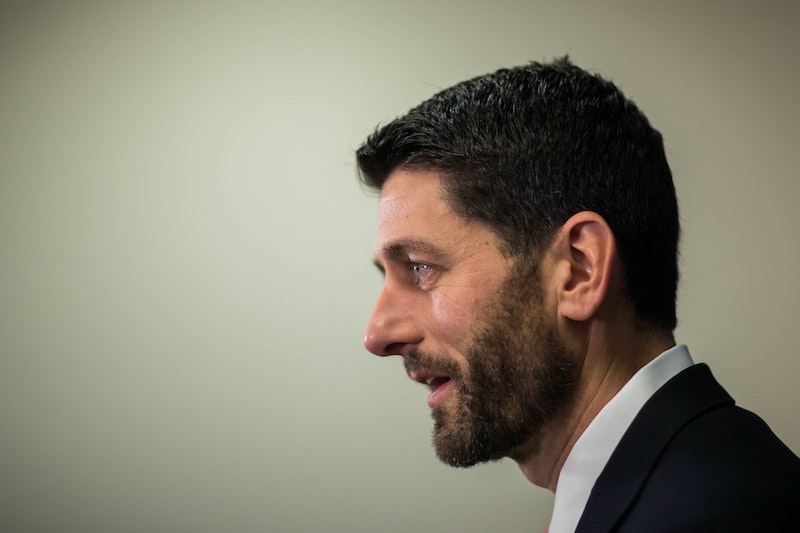 Sometimes I have trouble figuring out the right. Paul Ryan, the new Speaker of the House, now has a beard. It looks good on him (though a handsome fellow, he has a chin that underwhelms), but he spoke out against barring Muslims from the country and also helped push through a giant spending package supported by the White House. Rightniks are displeased and their displeasure has taken a striking form. Possibly. One reads in The New York Times that Ryan recently told President Obama “that some on the angry right have even accused him of being a Muslim. The president, who has long faced the same absurd allegation, chuckled.” The good liberal faces a dilemma here. Is Ryan full of it, as he so often is, or have the rightniks gone as all-out loopy as we can hope?

Google doesn’t turn up the wealth of bearded secret Muslim references that one might long for. But let’s visit a site with the promising title of Now the End Begins. No punches are pulled here: “History shows us that only two ethnic groups of people have rules regarding the growing and wearing of beards—Jews and Muslims. Ryan, a staunch Roman Catholic, is not Jewish. So that only leaves Islam. With that in mind, take a look at his new spending bill.”

Are they having us on? No, I think they mean it. The trending news links along the side of the page certainly look promising. “What Is the Point of Putting the Body of Christ...” begins one, and “Abu Bakr al-Baghdidi Tells Israel to Prepare to Meet...” begins another. The most tantalizing comes at the end: “The Rapid Merging of Man and Machine Will Create Race...”

I would click, but who needs trouble? I accept this site as genuine and as representing a distinctly non-majority viewpoint, even on the right. Yes, “some” rightniks think Ryan is a secret Muslim, and they also think he broadcast the evidence of his secret Muslim faith on Instagram. Or as Now the End Begins puts it, “RYAN BOMBARDS SOCIAL MEDIA LETTING YOU KNOW HE NOW ‘HAS A BEARD.’” An odd way to be sneaky, but he had to get word out to his secret religious cohorts. Like me, they probably wouldn’t take his word that he had a Muslim beard. He’d have to display the thing. Even then, the possibility of Photoshop and CGI raise troubling questions. For now all we can say for sure is that the people at Now the End Begins really like the word taqqiyah. Well, if Ryan were a Muslim, it would be his favorite word too.