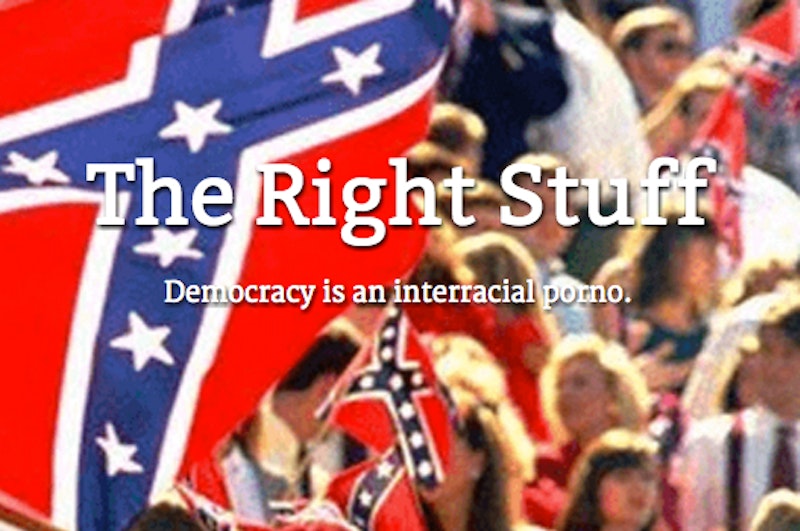 Further reading reveals that The Right Stuff has two primary missions: “Reinvigorating dialogue among a disparate and edgy right-wing" and "inflaming anuses among the childish and regressive left-wing.” The alt right loves to troll, and its efforts are often rewarded, as the lefties they target usually take the bait. A look at The Right Stuff’s list of contributors gives you an idea of their trolling potential, with such noms de plume as Holly Himmler, Fascist Heart, Kimmy Goebbels, and Maxwell Thruster.

A portion of the alt right movement disassociates itself with the standard, racially incendiary rhetoric typically associated with previous white supremacist movements. In a play for respectability, swastikas are avoided, as are references to Holocaust denial, the KKK, and Jim Crow. The stated desire is a separation of races, not based on hatred, but rather on inherent “differences” that make them incompatible.

The Right Stuff, on the other hand, can't be bothered with such delicacy, as a perusal of its handy glossary shows. “Aspiring rapper” is defined as a “dindu nuffin.” “Dindu nuffin,” a little farther down on the alphabetical list, is defined as an “obviously guilty” black man (who always says he “didn't do nothing”), or as The Right Stuff puts it, Basketball American. “Merchant” is defined as “A Jew; particularly of the perfidious, Christ-hating, subversive variety.”

You really get to know some of The Right Stuff contributors by listening to their podcast, The Daily Shoah, which sometimes rambles on for three hours. Their latest was a holiday broadcast that kicked off with Johnny Monoxide’s remake of “Rudolph the Red-Nosed Reindeer." It starts, “Rudolf the red-nosed fascist/Had a very tiny ‘stache/And when the Jews would mock him/He would turn them into ash.” You can hear the panelists—Seventh Son, Mike Enoch, Alex McNabb, Ghoul, Hateful Heretic, Greg Johnson and Paul Kersey—guffawing loudly in the background. It gets better: “Then all the chambers filled up/With a gas called zyklon B/Did Adolf gas the Merchants?/Well that's the big mystery.” The rest of the podcast is dedicated to an analysis of the latest Star Wars movie, and how “the Jews” (specifically “Jew Jew Abrams”), messed it up. It's essentially Opie and Anthony for white nationalists. Just some regular bros hanging out and having some chuckles, except that they hate blacks and Jews.

If there's one phrase in The Right Stuff glossary that best sums up their ethos, it's probably “race cuck,” which is defined as “A white man who denies his birthright privilege for the sake of appeasing darkies and signaling status to his oven middle class peers.” “Oven middle class” means “middle-class liberals whose primary method of signaling is advocating for policies that ruin the areas they don't live in and the lives of people they don't socialize with. NIMBY multiculturalists.” The “oven” is the oven these liberals belong in, like the ones the Jews were put in.

The Right Stuff reacts to their type being labeled “fascists” and “Nazis” by embracing those very terms that are meant to hurt them, much like many blacks have done with “nigger.” You call yourself what your enemy calls you, and you're immunized—the word can't hurt you anymore. There's a heavy component of trolling there too, and you can imagine the joy they must feel anticipating the reactions of earnest, hyper-liberal media outlets such as Salon or Alternet to a song about Jews being gassed.

The Right Stuff isn't hiding behind the dog-whistle brand racism that right-wing politicians rely on. They keep things light and jaunty too, like it's just regular talk, and there's nothing better than a good Holocaust joke or racial insult. They're smart and articulate too, not at all like the archetypal ignorant redneck, KKK-type hate-monger, so the message goes down more smoothly.

Many of those drawn to The Right Stuff website are attracted to Donald Trump, who’s now redefined how bluntly a politician can speak, without any deference to PC sensibilities. These people don't drive a Prius and don't buy fair trade coffee because they think it makes the world a better place, or makes them feel better. They don't turn on NPR and hear about an injustice in some faraway part of the world and feel bad about it. They know the world is not fair, and they’re okay with it, because they're sure they have a birthright that protects them. These people see that birthright being threatened now though, and they turn towards someone who will defend it. The way The Right Stuff sees the world is encapsulated in a phrase on their website—“will to power, brah.” It’s white nationalism with a “bro” spin.