Mister, We Could Use Toody and Muldoon Again 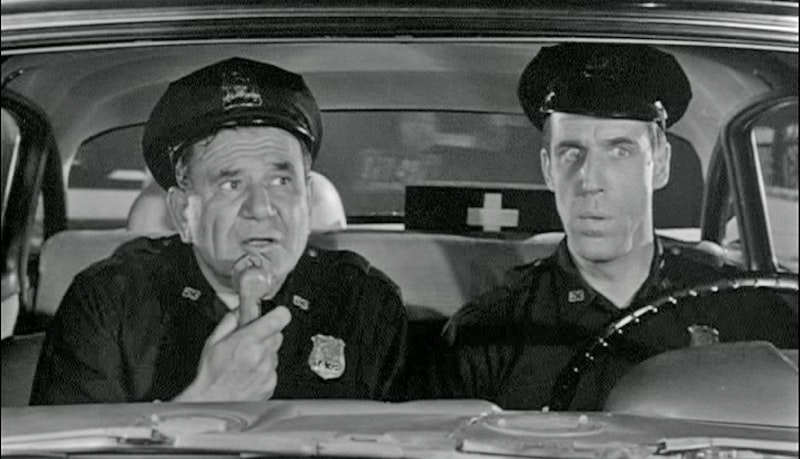 On Sunday afternoon, a dreary, rain-soaked day in Baltimore, after a screening of Stephen Frears’ great 1990 film The Grifters—maybe career performances from John Cusack and Anjelica Huston—with my wife and two sons, I was reading Fredrik Backman’s Brit-Marie Was Here (not his best) and briefly nodded off. Snapping to, I absent-mindedly began singing, very softly, “There’s a hold up in the Bronx/Brooklyn’s broken out in fights/There’s a traffic jam in Harlem/That’s backed up to Jackson Heights/There’s a scout troop short a child/Kruschev’s due at Idlewild/Car 54, Where Are You?”

A dwindling number of people remember the TV show—starring pre-Munsters Fred Gwynne and Al Lewis, and Joe E. Ross—from which that theme song’s taken, as it was aired for two seasons, ending in May, 1963, hence the mention of Idlewild before the airport’s name was changed shortly after John F. Kennedy’s assassination.

The recollection was spelunked, I assume, from a New York Times story by Michael Wilson I’d read that morning, the gist of which was that New York City residents are antsy after six weeks of lockdown. Wilson’s lead sentence sums up what I’ve heard from friends in the city who are going nuts: “A walk in the park brings tense flare-ups: Back off, you’re too close. Oh really? Then stay home. A loud neighbor, once a fleeting annoyance of urban life, is cause for complaint to the city. Wake at noon, still tired. The city’s can-do resilience has given way to resignation and random tears.”

There’s not much to add: the five boroughs and Nassau County (and northern New Jersey) are still in the thick of COVID-19 chaos and bewilderment, and unsolicited advice from non-residents, I’d think (as a onetime Lower Manhattan-dweller) wouldn’t be appreciated. But as Times op-ed whipping boy Bret Stephens—who can’t catch a break from many readers ever since he jumped from a lower-profile once-weekly column at The Wall Street Journal to the Times (more cash and pizzazz, I assume was the lure)—wrote last week, to the usual raspberries (in polite terms) from the social media commentariat, “Americans are being told they must still play by New York rules—with all the hardships they entail—despite having neither New York’s living conditions nor New York’s health outcomes. This is bad medicine, misguided public policy, and horrible politics.”

The wreckage in New York City is bad enough for the country at large—it’s still, by far, America’s financial and cultural engine—without spreading it, so to speak, through all 50 states. As my colleague Emina Melonic wrote last week for Splice Today, as an Erie Country resident in upstate New York, where COVID-19 cases are few, why should her region not be allowed to reopen for business? It’s a touchy subject.

My son Nicky, on Monday on Splice Today, bludgeoned Stephens for his “moronic” column, echoing a couple of longtime friends of mine who are doctors, that the U.S. has to follow the science and not take chances because of citizens’ frustration at having their movements, livelihoods, and shopping/recreation routines put on hold. (One of those doctors did note, however, that the long line at the gun shop near where he lives in Nassau County gave him the willies.)

Nicky concluded: “Stephens doesn’t have a Trump-sized bullhorn, and most Times readers are suspicious of reopening the country so early. This isn’t a dangerous column: it’s just stupid.” The Times is one of the very few large-circulation publications (digital and print) that remain; I doubt that “most” of its readers want the strict lockdown to continue. In my son’s defense, he’s not an apologist for either major party, writing: “[F]or those who oppose the death cult of the GOP, we are flogged and gaslit by the DNC, who offers us a man that could not recite the alphabet if asked on a dime. Joe Biden has brain problems, this is obvious.” Biden’s latest eye-opener was saying we need to engage in more “economic intercourse.” I wonder if Tara Reade agrees with that.

I don’t think Stephens is a “moron,” but rather a smart (compared to his walking-in-a-solipsistic-daydream colleague David Brooks, not to mention the Biden-esque Thomas Friedman) conservative who’s pro-immigration and a foe of bloated bureaucracy who, like many in the media, is repulsed by Trump’s loutish behavior and what he perceives as a frivolous approach to governing. I agree with Stephens that the rest of country—aside from the few other “hot” COVID-19 spots—ought not be held to the restrictions of New York City.

And think about it: will the damage done by the lockdown eventually dwarf the plague itself? Throughout the country, people confined to their homes or brief walks outside are living in an unnatural state. As the Times’ Wilson alluded to, tempers are flaring, and depression is off the charts. It’s hard to imagine the toll, which won’t be accumulated any time soon, for a sharp spike in domestic abuse, divorce, increased alcohol and drug use, suicide, and personal bankruptcies. Is it far-fetched to speculate that, if the lockdown continues indefinitely in New York that looting and other forms of anarchy will run rampant? Wildcat strikes by sanitation workers, cops, subway personnel and construction crews? Crime is down across the country (even in Baltimore!), but cramped humans can only take so much.

Most of the economy, no matter what some politicians, usually Republicans, say, won’t return with a vengeance in, say, September, but some industries will prosper. It’ll be a great time to be a lawyer, if not a real-estate agent or restaurateur. On the other hand, typically in the aftermath of a recession, retailers run out of business are replaced by new entrepreneurs; especially since rent prices will be low. I don’t believe that Amazon will completely dominate: independent stores will pop up, particularly those run by immigrants (at least those allowed in under both parties' obstreperous policies).